The end is nigh! The season draws to a close. April is a special month, seeing blank game weeks, double game weeks and chips galore. It may be too late to reach the highest ranks, but after three great gameweeks I’m feeling good about my team. 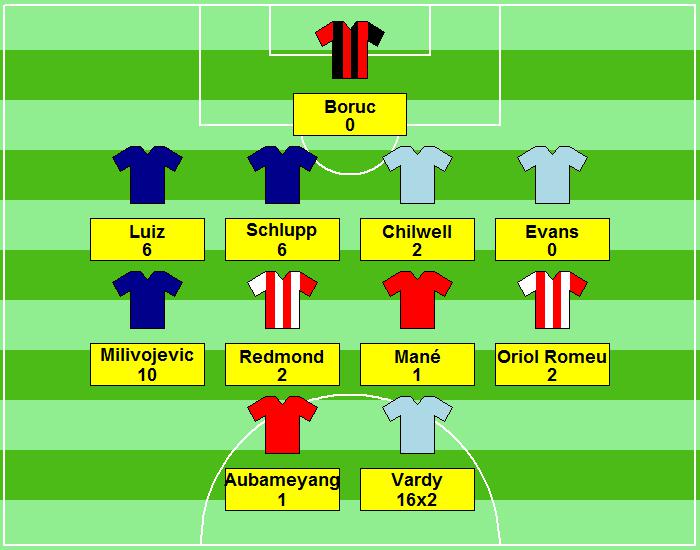 After the excitement of a high scoring double game week comes a blank game week. It can be difficult to get a team set up for both back to back. I had to transfer out Aguero to get a full team, and even then I had unexpected absences in Boruc and Evans so I could only field nine players.
I brought in Aubameyang as a replacement, but he only scored one point, which left me wishing I had kept Aguero.

The most important thing was that I nailed my captaincy choice, with Vardy scoring fifteen more points than the other natural captain Mané. This decision alone made my game week. Furthermore Luiz, Milivojevic and Schlupp all followed up their great debuts in my team with further returns.

I was excited for this game week because it was the weak point in a popular strategy. A lot of content creators were talking up the merits of using a free hit in game week 32 and wild carding in game week 34. This meant that their players for the two blank game weeks were very similar despite there being much better options this week than in game week 31. For example I scored 16 points from Crystal Palace players who didn’t play in the original game week. I was disappointed to still finish below the top 10K average. Hazard was the biggest reason for this. He was heavily captained and scored 16 points. This would have been one of my very best game weeks of the season if he had blanked. 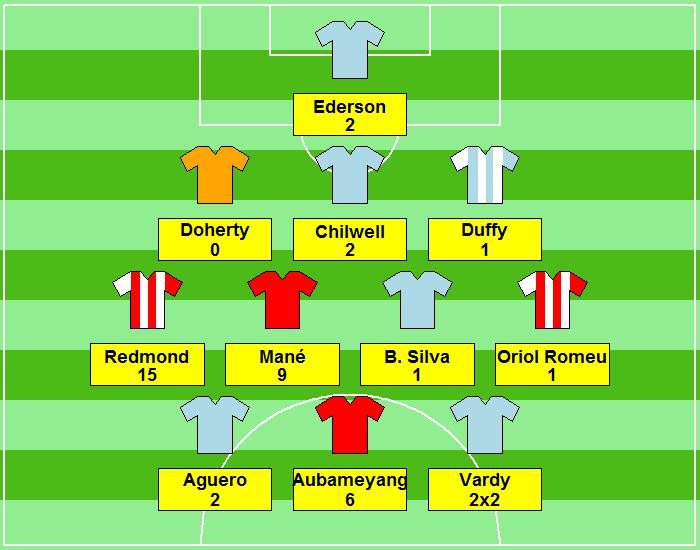 After four fantastic game weeks with excellent game week ranks, things go wrong. Injury to Harry Kane forced me to take my only points hit of the season. I had tried to avoid doing this all season, but I really needed to make two transfers this week. Part of my wildcard plan had always been to remove a Leicester defender and get a Brighton player for their back to back double game weeks. A popular differential option this week was to captain a Brighton defender this week hoping for a big score with two fantastic fixtures. Despite such good fixtures, Brighton conceded 7 goals so this transfer looked pretty poor.

My score was below average and was dominated by a handful of players. This was another lesson in fine margins as my bench was well stocked. Had I played Milivojevic and Boruc I could have had another ten points, which would have given me an ordinary score instead of an disappointing one. 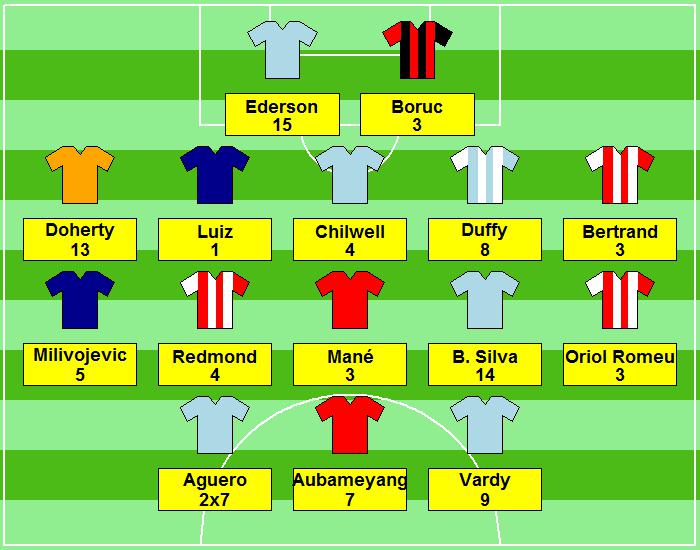 In theory, bench boosting on a double game week should give you your highest score of the season and so it was to be this week. With my second century of the season I beat my score from game week five. My bench scored twelve points which is a satisfactory score for a bench boost, especially since my team was ready for the double game week but not fine tuned. Only nine of my fifteen players had two fixtures this week.

Amusingly I captained the worst of my Man City players with Aguero only scoring seven points, whilst my other Man City players scored twenty-nine points between them. Only Perez with a hat-trick and Deulofeu with a brace were the only players to score more than once this week. I was very afraid of Sterling or Hazard scoring hat-tricks. The reality of the game is that you can’t fit every great player in your team, so you’re always exposed to the risk of a popular player scoring twenty points and ruining your game week rank. Most of my points came on the first day of the game week, so I spent a long week watching my game week rank slowly dropping. Had Sterling and Hazard blanked, my game week rank would have been extremely good. One player I wish I had bought was Laporte. He has proven himself as a double game week superstar who score more than ten points in a double game week for the third time this season. 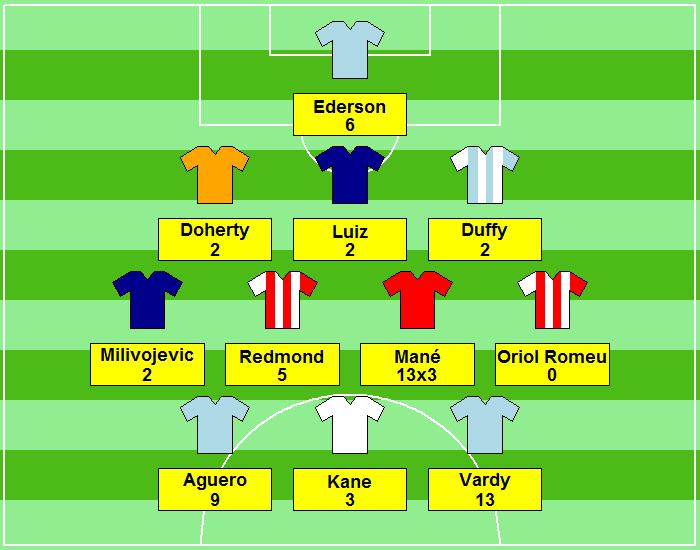 It’s time for me to play my final chip of the season. Triple Captain is the most fickle and frustrating chip in the game, capable of delivering very little, no matter how good your choice was on paper. With Liverpool playing Huddersfield at home, this seemed like a great time to play the chip, and indeed it was. I scored 13 points from the chip, which is pretty good. The only frustration was that Salah outscored Mané with 19 points and in doing so stopped Mané from getting maximum bonus points.

Vardy was being transferred out by a lot of people because of his difficult looking fixtures. I kept faith and he matched Mané with another 13 points. My transfer this week however was a big failure. I brought in Firmino to get an extra Liverpool player, but he was injured and didn’t play. Injuries are a part of the game but to miss one of the easiest games of the season is very annoying. My game week rank would have been much higher had I more than one Liverpool player. This is a definite issue with my line up at the end of the season. In the end this was a good game week that could have been great.

This was a really fun month, probably the most enjoyable of the season so far. I climbed another 100,000 places to make my score a little more respectable. Four of the five weeks led to climbing the table, and my chips were played successfully with very good scores. You cannot ask for much more at this stage of the season. April is a month with the potential to break a season, especially for those who burned their chips earlier in the season. 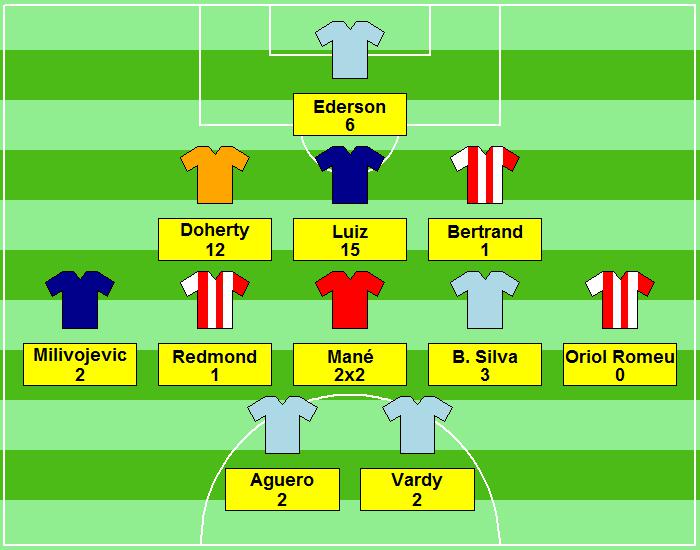 This was a very average game week. I finished with the average score, and a completely middling game week rank. This was a week where only my defenders got any returns, which was the same for most managers this week. All of the usual captaincy options blanked, but many popular defenders reached double figures. Since many people can only have one or two premium defenders, I suspect scores were very similar for most people this week. The list of defenders to get double figures this week included Laporte, Kompany, David Luiz, Alexander-Arnold, Doherty, Fredericks, Aké, Digne and Coleman. The list of attacking players to match those performances was much smaller. This game week really helps to validate those who say this was the year of the defender. 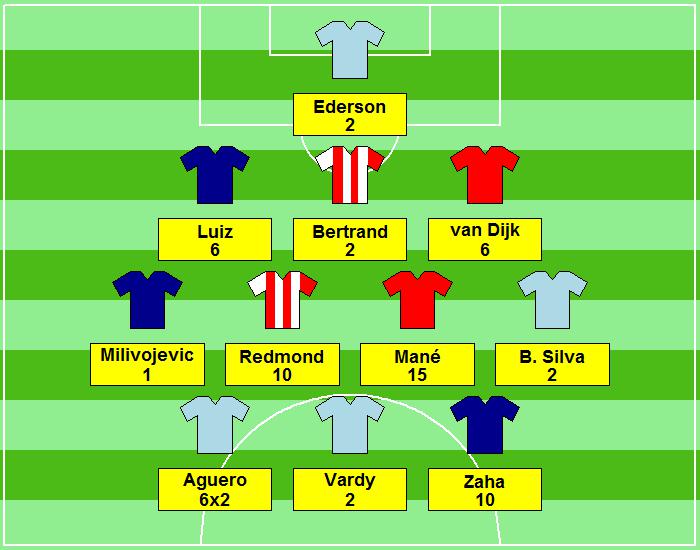 The last game week of the season is a always a little bit special. Some teams have nothing to play for, some managers rotate heavily and some games turn into farcical goal-fests. This time around Cardiff beat Man United two-nil whilst Crystal Palace versus Bournemouth finished five-three.

Three of my players hit double figures including Zaha who I signed for the week and bagged a hat-trick of assists. My other signing van Dijk kept a clean sheet, ensuring I finished the season with two solid transfers. I nearly signed Trent Alexander-Arnold, but I was put off by a minor injury scare. He proceeded to grab two assists and fifteen points, so that success was tinged with little bit of regret. I also benched Chilwill against Chelsea, but Leicester managed a cleansheet. I was very close to getting a six figure game week rank so either of these decisions would have made the season finale even sweeter.

After ten months, the season is finally over. I finished 99 points behind last season and well outside the top ranks. I’m already getting excited about next season, but before then join me for my next FPL post when I’ll be doing a detailed analysis of the entire season.