The season rumbles on. This has been a difficult season, but the end of the season is where the biggest opportunities for points can be found. I played two chips in March. How did I fare? Read on to find out. 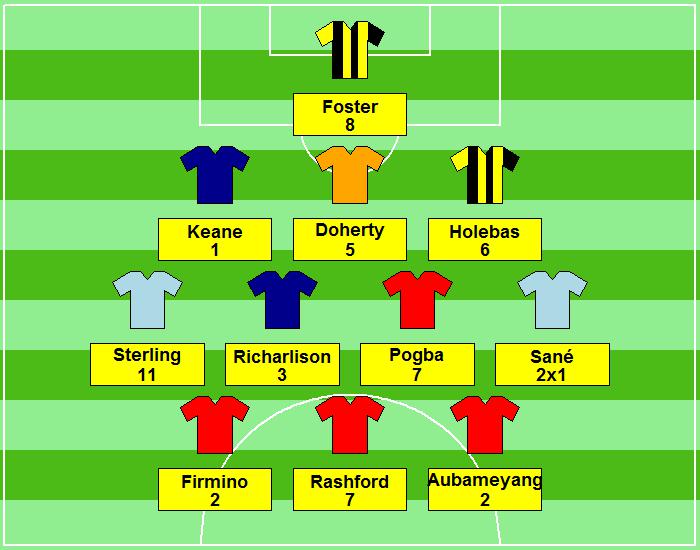 This was the first double game week of the season, with eleven fixtures instead of ten. I brought in a total of four Man City and Everton players to try and capitalise, but only Sterling returned. Sané was my captain and a popular choice, but he managed only a single point which is shocking for a double game weel

My team for the week looks OK, with six players returning. The biggest problem is my continuing failure to pick the right captain. However this was a very very high scoring week. Aguero scored a hat-trick against Arsenal and Hazard and Higuain both got a brace against Huddersfield. But perhaps most annoyingly Redmond scored eleven points whilst sat on my bench. Had I captained Sterling and played Redmond I would have matched the top 10K average. I may not have had the biggest scorers of the week, but my team was close to making up for it. This was yet another frustating week.

My transfer this week was a success. I brought in Foster in goal who scored 8 points.

This was a very strange game week. I had three players who hit double figures, and finished above both averages. However it felt like a failure because both my captain and vice-captain failed to play. This left me with out a captain for the week which has never happened to me before. If I had captained Sterling or Pogba, I would have finished with a fantastic score. After last weeks failure, I shipped out Sané to bring in Mané who instantly scored 8 points. Last week’s transfer Foster scored 10 points, so he continued to reward me.

Game of the week was Man City beating Chelsea 6-0. Aguero scored a hat-trick which really pushing up the average but I had Sterling who got two assists and a goal to help me keep pace. 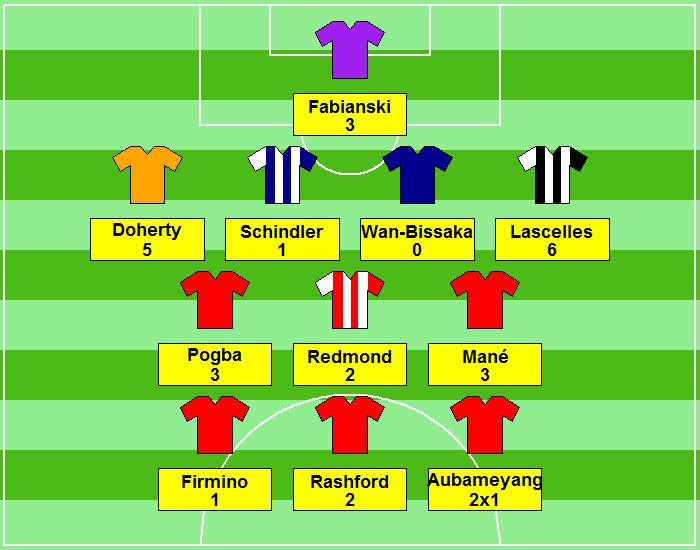 We reach our first blank game week of the season for the league cup final. Without high scoring Man City the average scores were much lower than normal. Unfortunately my score was also lower than normal. Man U vs Liverpool ended 0-0 which was very bad for my rank. Defenders from these teams are very popular, whilst three of my most expensive attackers all blanked. Watford were the big scorers this week. Deulofeu in particular got a hat-trick and an assist.

My transfer this week was to bring in Lascelles for Holebas. Lascelles ended up being the highest scorer in my team with a single clean sheet which shows just how bad this game week was. 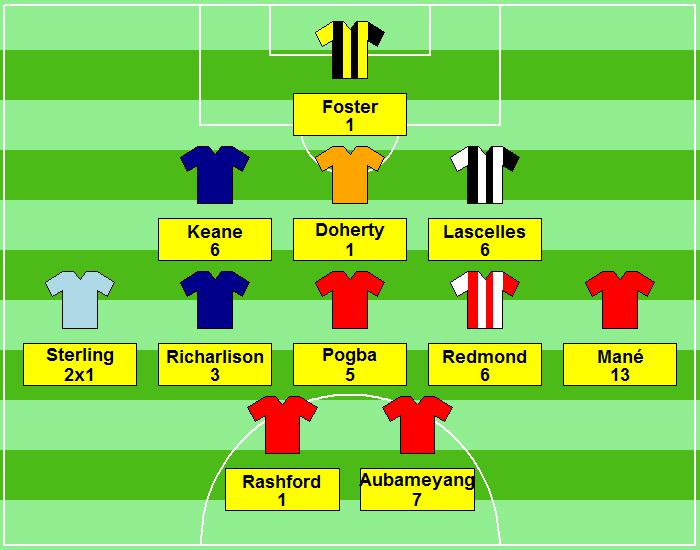 Points were widely spread around this week. A number of players scored two goals, whilst Liverpool and Arsenal both scored five. Unfortunately Mané was the only player I had to score a brace, and I had captained Sterling expecting Man City to score lots themselves,
where as they only scored one goal. Sterling had been scoring double figures until I decided to captain him. I was close to the average this week thanks to a number of players chipping in small amounts. In fact had I not left Schindler on the bench his six points would have taken me above the average scores, and captaining Mané would have given me a very good score. This is pretty much the same as game week twenty-five where I was very close to a good score. The margins in this game can be razor thin.

My captain picks were a true disaster. I three points from my captain’s armband this month. My hopes of reaching the top 10K faded long ago, but now it is looking harder and harder to reach the top 100K. There are ten game weeks left, and with the double and blank game weeks, there are huge opportunities to make up ground. The finish line is in sight so I’m determined not to give up. 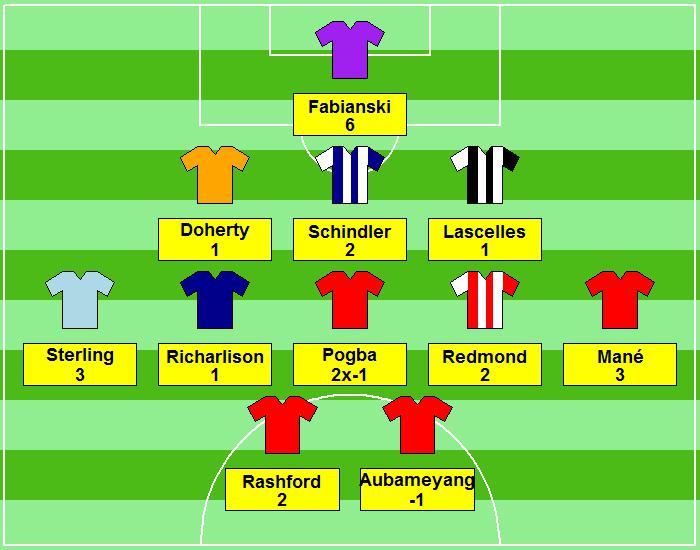 Oh My Word. In the middle of a bad season, I had a week that was worse than my worst nightmares. This week will long live in infamy. I even got a six million game week rank! Two of my players missed penalties, including Pogba, who also got a yellow card. To compound the negative points I captained Pogba. My goalie was the only player to return, whilst the outfield players on my bench scored 15 points. I had brought in Lacazette, but forgot to change my line up, so I stupidly had a premium option sat on the bench. Let’s move on from this horror show. 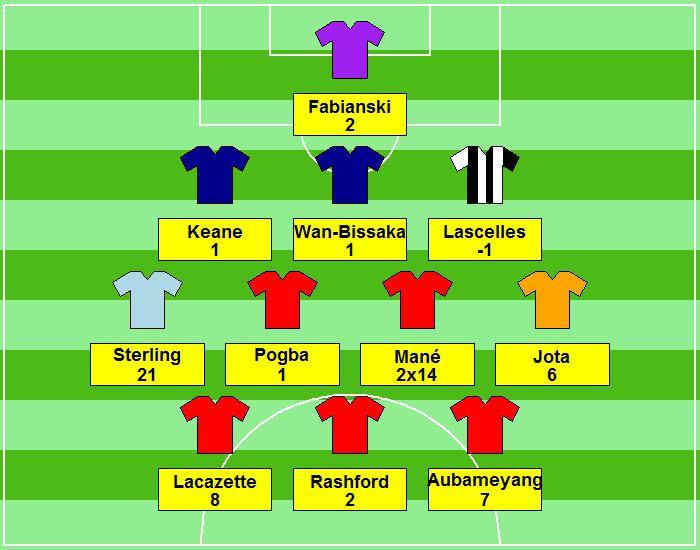 Some times a game week revolves around only a handful of players. There were very few clean sheets this week, so defenders had little value. The three big scorers this week were Mané, Sterling and Vardy. Sterling in particular scored a hat-trick. I didn’t captain him, but Mané saved me. After a shockingly bad week it was good to have a very good week. I finished well ahead of the weekly averages and had a great weekly rank, even though Lascelles gave me a negative score and I didn’t captain Sterling.

My transfer for the week was to bring in Jota who rewarded me with six points, however he replaced Richarlison who scored eight points after six weeks of disappointment. Something else that annoyed me was that I forgot that you can’t bank free transfers over a free hit chip, so I missed the opportunity to use a second free transfer on the brink of the most complicated part of the season. 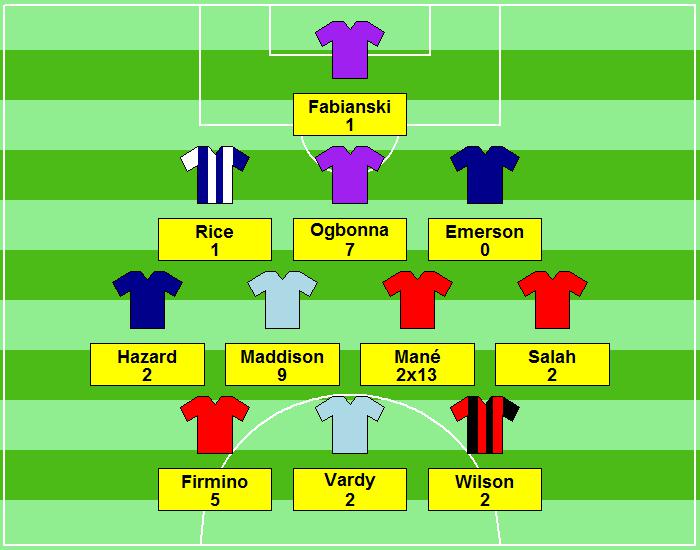 After thirty weeks we have finally reached the real crunch point of the season. Only five games were played this week, with a lot of unexciting fixtures. In the FPL community, a consensus had emerged that you should use transfers to build for the blank game weeks, free hit in the first double game week and wild card in preparation for the second double game week. With out taking hits, this is much harder to do, and I didn’t want to load up on players from this game week for the last few weeks.

Instead I used my free hit. This lets you maximise on the fixture list. I took three West Ham defenders against dire Huddersfield. Some how Huddersfield scored three, but fortunately I had Ogbonna who scored as well. The most important decision this week was to captain Mané. Hazard and Salah both blanked, and were heavily captained, giving me a big ranking boost. I don’t understand why Salah is so heavily captained when his form is much worse than Mané’s.

Firmino and Maddison were my only other players to return this week. I bought Emerson for Chelsea coverage but he didn’t play which looks quite embarrassing on a free hit. Luckily for me Chelsea lost to Everton, so I didn’t miss out on many points. In fact Everton were the only team to keep a clean sheet this weekend. 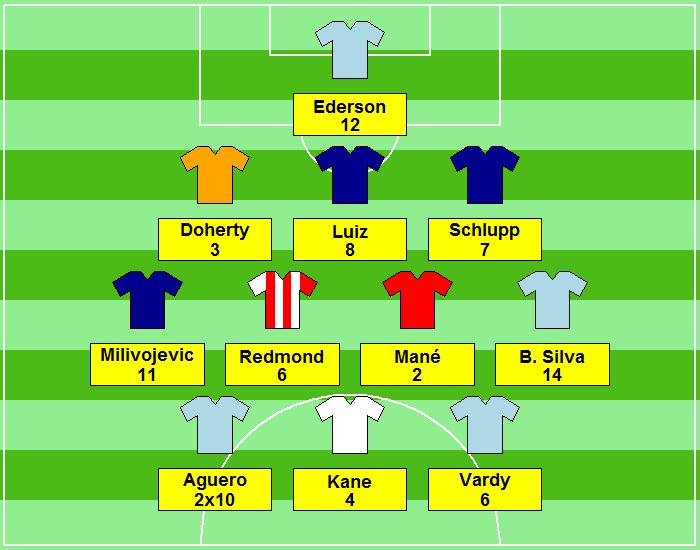 Was this the most exciting game week of the season so far? I played my wild card, while most in the community were free hitting. Where as they only had to consider one week, I had to consider the next blank and double game weeks. There were some great options this week with great fixtures for Man City and Chelsea. However considering my budget and planning for the future I made the big decision to forgo Sterling and Hazard. Sterling blanked, where as my budget replacement Bernardo Silva scored 14 so that was a big success. Like most people I captained Aguero, who scored 10 points but went off injured in the first game.

This all happened in the first game of the week, and that Saturday continued to be an amazing day. A lot of players like Redmond, Vardy and Milivojevic were overlooked for only playing one game. They all scored on Saturday leaving me with a massive rank boost and the potential for a massive haul. It wasn’t to be however. Kane blanked twice, and Pep Guardiola rotated so heavily almost no Man City players played both of the fantastic fixtures. On the last day Hazard scored 14 points which made a big difference to the weekly averages and badly hurt my rank. Laporte was another popular player to score big, having already hauled in a double game week this season.

Overall this was a very good game week, but it was frustratingly close to a great game week. I had Leicester defenders on my bench in preparation for the next week, who scored 15 points between two of them.

I’m still disappointed with my rank, but with three big green arrows in a row and chips ready for the coming weeks, I’m hoping I can close the gap on the top one hundred thousand. At this time last year I was treading water during the chips period, so it is interesting to see how powerful the chips can be at sending you up the rankings.