I’ve been collecting dice for a number of years. Some of them are very beautiful and there are many kinds of unusual or wacky dice that challenge your expectations of what a dice can be. They are also the perfect thing to collect while travelling because they’re cheap and light and small. I can never resist popping into a toy shop searching for new dice. 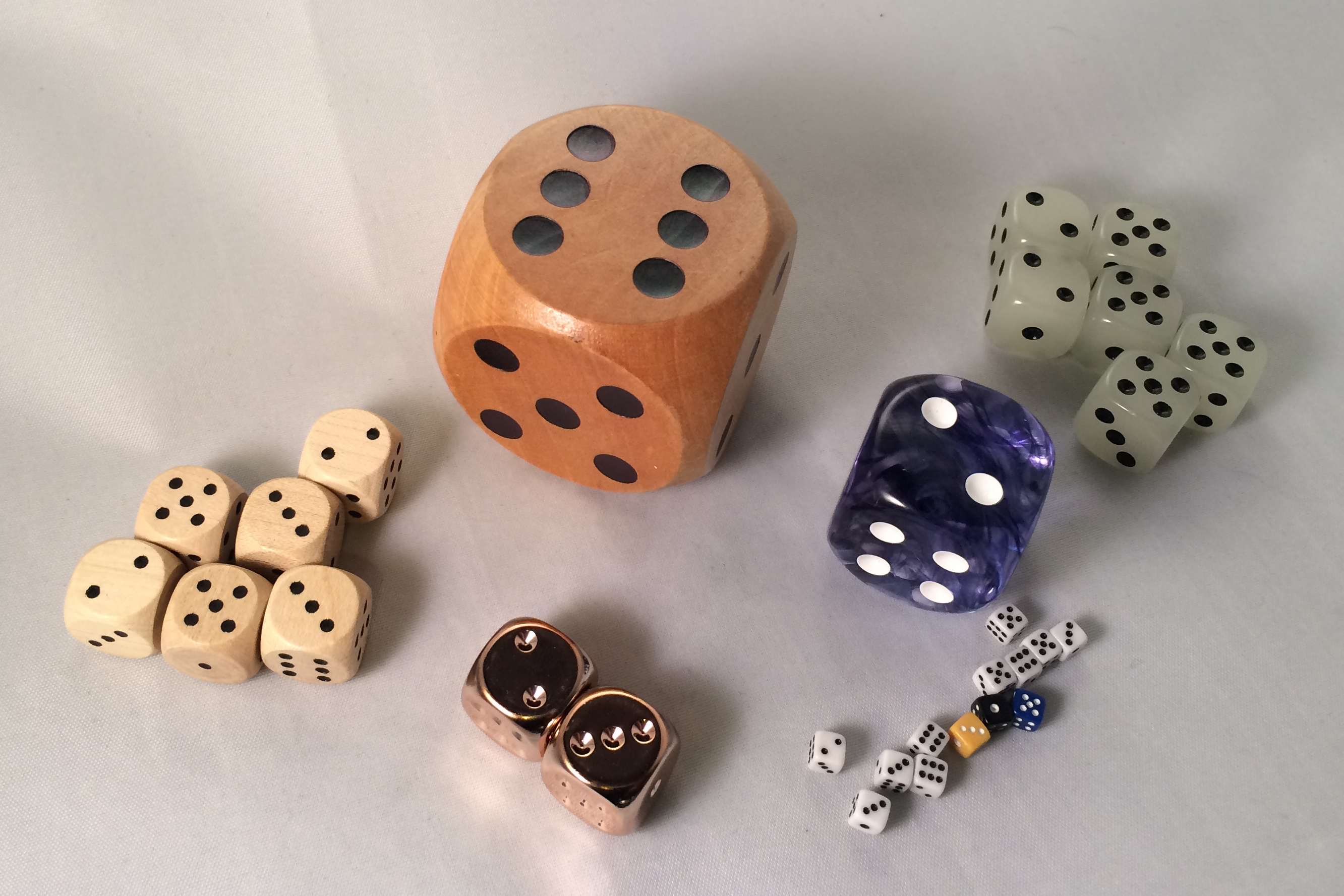 Let’s start with some rather normal dice. Dice can be made with different materials. I love wooden dice, and the large wooden dice is the largest dice I have. Most dice are plastic, but plastic can be very beautiful. The large blue dice is made of acrylic and looks spectacular with the light shining through it. It comes from a fantastic game shop in Camden.

At the front are my only metallic dice and on the right are the smallest dice I own. These are very easy to lose. The pale dice on the right will glow in the dark. 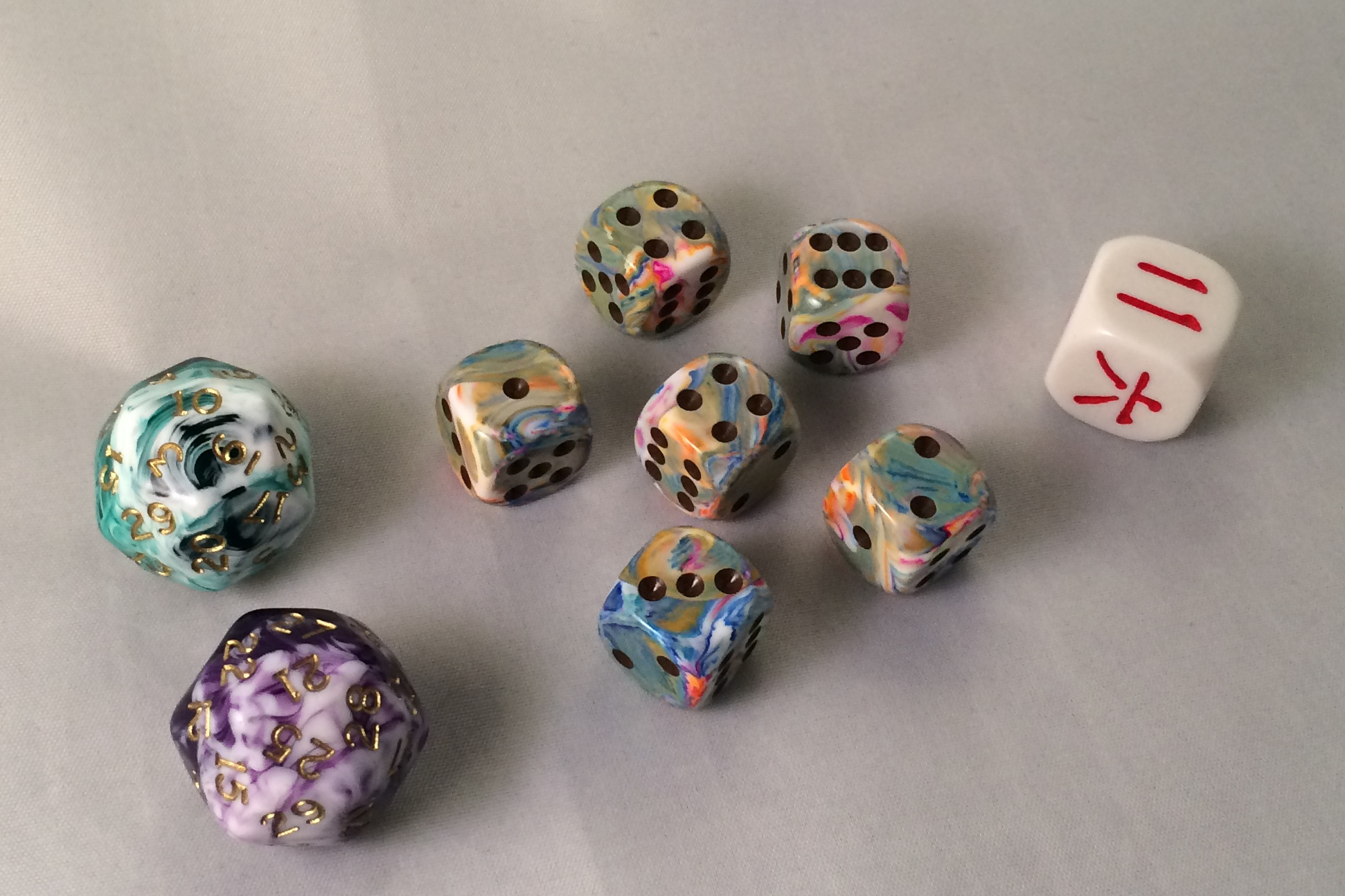 These are some of the most beautiful dice in my collection. On the left are two dice from Paris. They have thirty sides, marbled colouring and golden numbers. They can be a little hard to read, but they are gorgeous. In the middle are some more marbled dice that I bought in Prague. They are very colourful, but still normal dice.

On the right is a dice with the numbers in Chinese. As a aficionado of the Chinese language, this is also one of my favourites.

More than One to Six 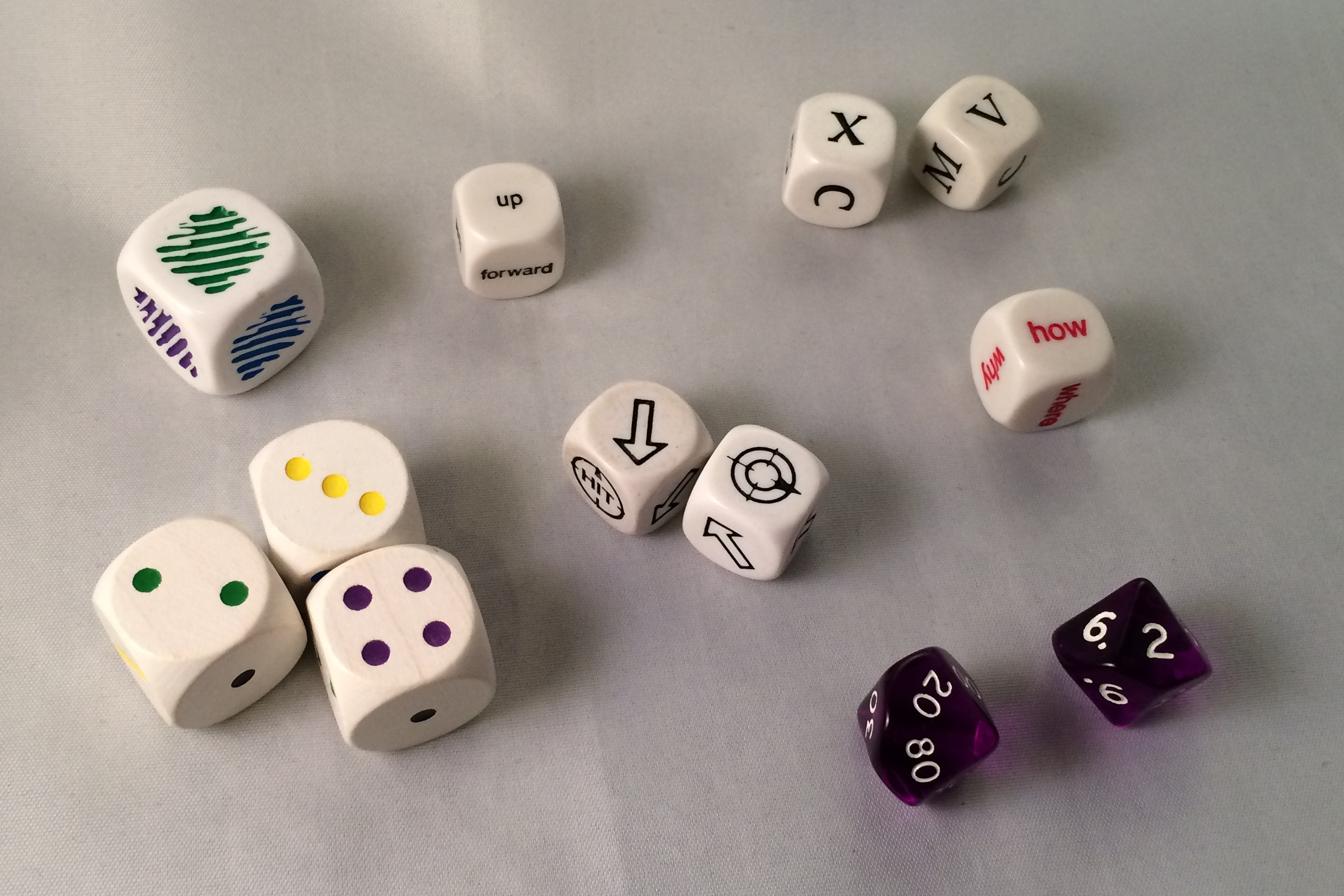 Let’s look at some dice that can generate more than numbers. Starting again on the left, there are four dice that give you a random colour. Dice can also be used to generate directions. In the very middle are scatter dice from the Warhammer games. I’ve always been fascinated by the fact that normally dice give only six possibilities, but with arrows, a dive can generate an infinite number of directions. Behind the scatter dice, is another directional dice, that uses words instead of arrows.

On the right is another ‘wordy’ dice. This one gives question words instead. I never used it English classes, but maybe I could have. Also on the right are two dice with Roman numbers, and a pair of purple dice. The purple dice can be used to get a random number between 0 and 99. Both dice have 10 faces and give a different digit. 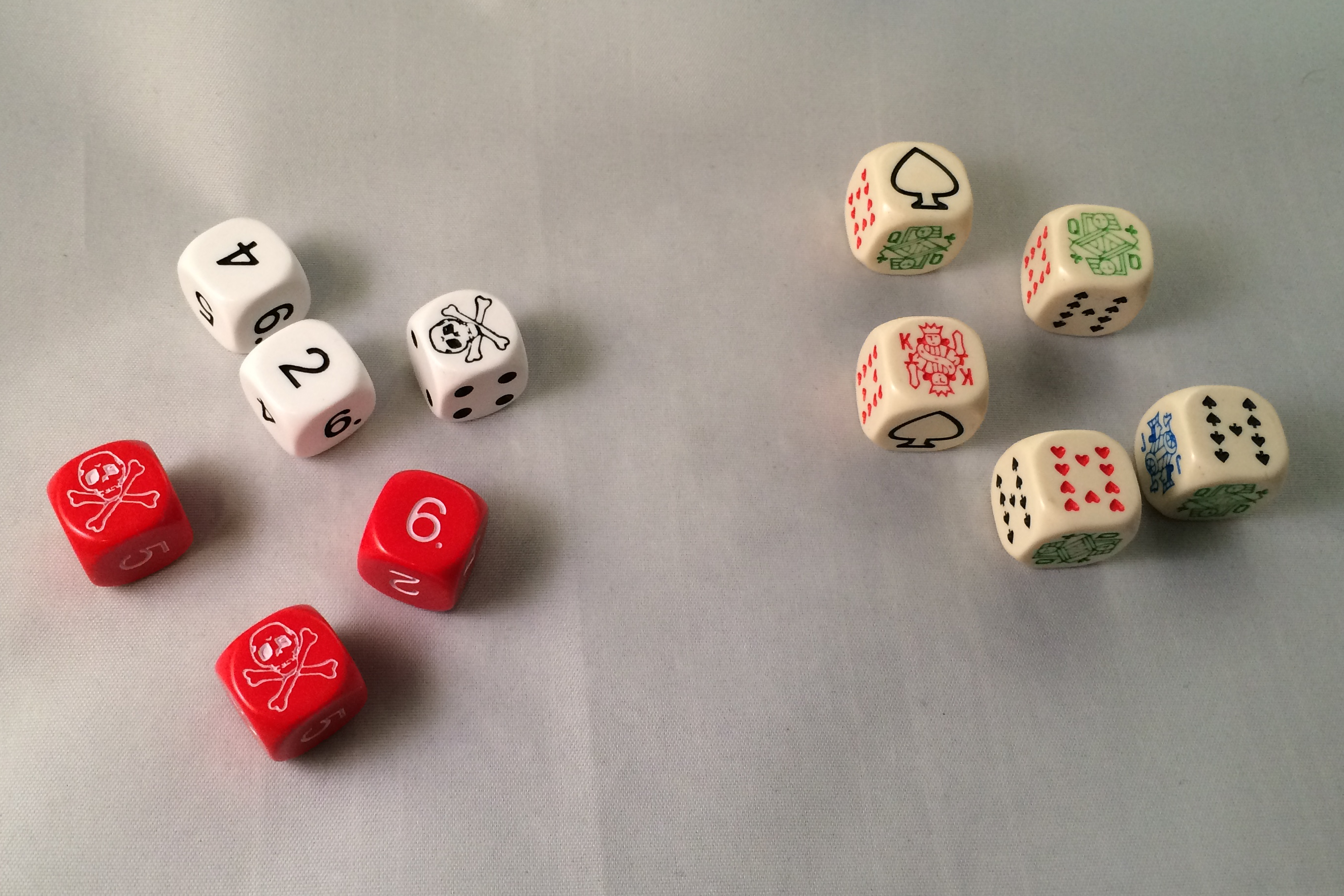 On the left are ‘pirate dice’. They are like normal dice, except that the ones are replaced with skull and crossbones. They can be used to play the traditional dice game ‘pig’ but they could be used to create new games.

On the right are some poker dice. They represent the cards from 9 up to Ace. They can be used to play poker or other gambling games. 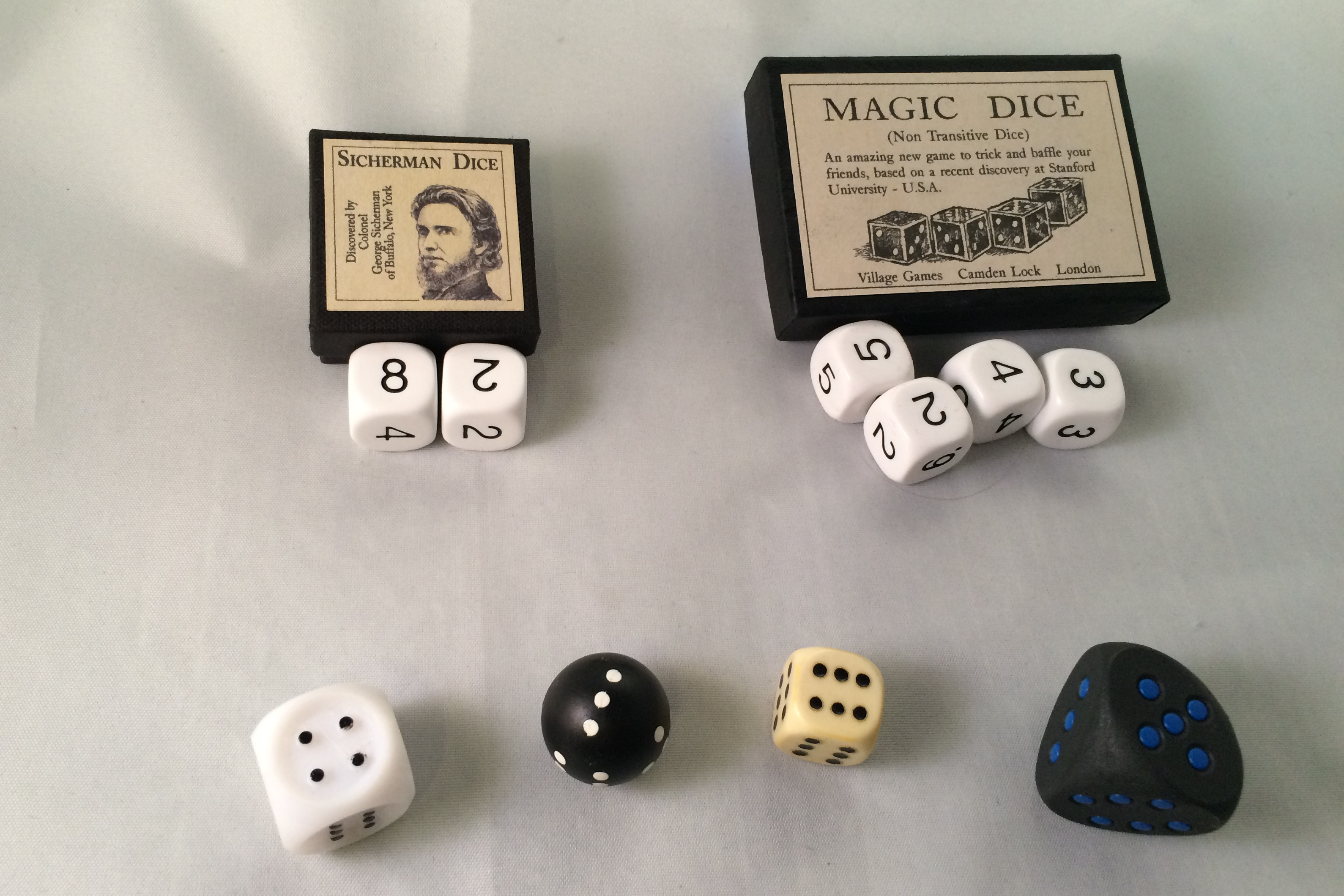 We now get to some of the strangest dice in my collection. At the back on the left are Sicherman Dice. They have six sides but have unusual number combinations on them. However the possible results are the same as a normal pair of dice. For example they have a one in thirty-six chance of scoring twelve, just like common dice. On the right are magical or non-transitive dice. They also have unusual number combinations which can be used to trick your friends. Ask them to choose a dice and then you choose a dice. You then roll them and compare repeatedly. You will find the odds stacked in your favour, no matter which dice your opponents choose. This works because you choose the dice after your opponent. Both sets of dice where from the wonderful shop in Camden I mentioned afterwards.

In the front row, are yet more quirky dice. Going from left to right, there is a tactile dice that can be used by blind people. Second is a spherical dice, which has a weight in the centre so that it always lands with a number face up.

Next is the oldest dice in my collection. It only has sixes on it so you can cheat if you are playing games with people who aren’t very observant. Finally the last dice is a normal dice with six sides but a very strange shape. 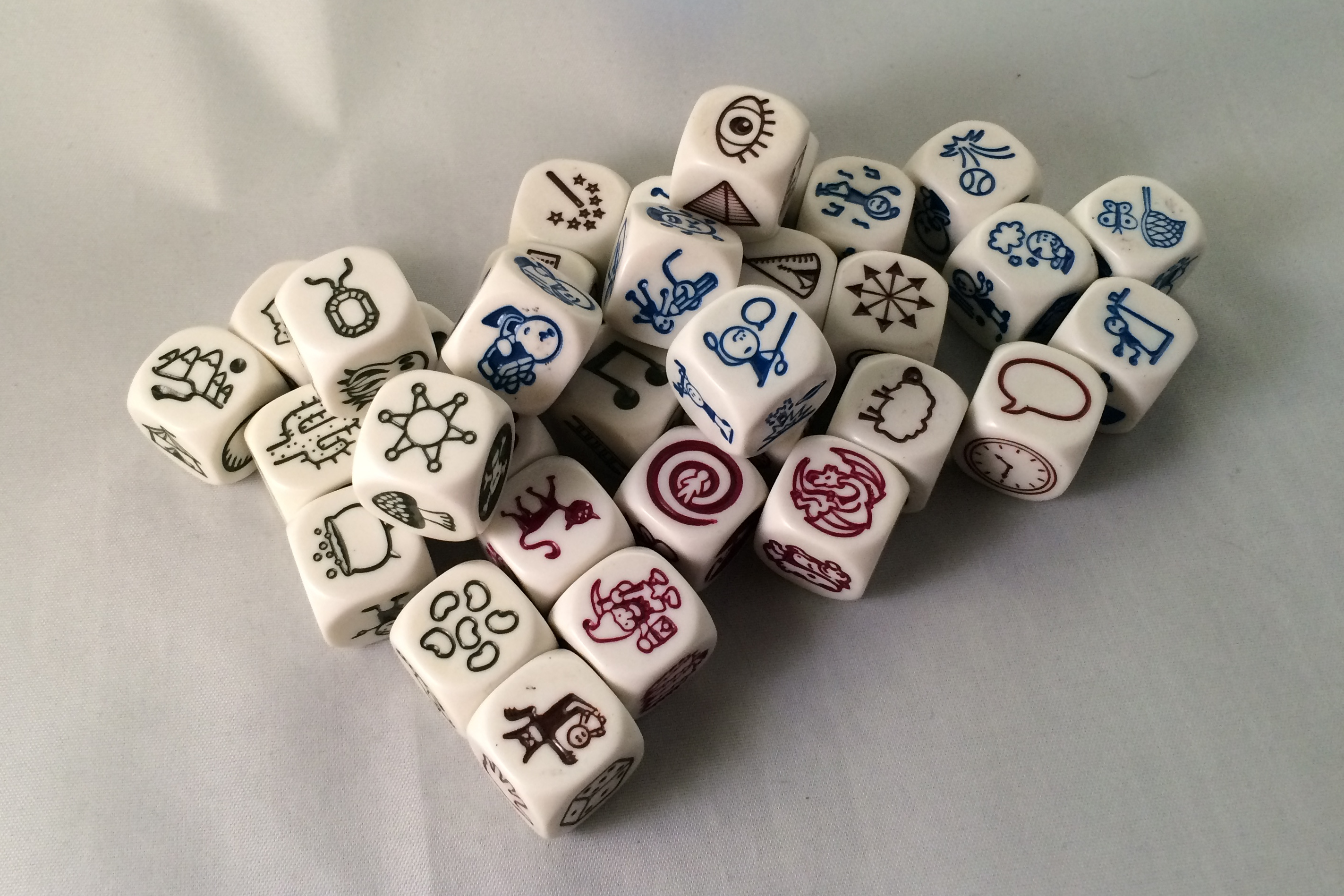 My last photo is of story dice. There are many ways to use them, but they all revolve around rolling them and telling a strange random story with the wacky pictures you get.

They come in sets with different themes, and I’m always tempted to by new ones. I was partly able to justify my addiction by the fact that they were very useful in class. This is a very difficult activity to do in your first language, let alone a second, but they were popular with some of my students. I would use them as a way to practise past tenses.

You’ve reached the end of my collection, but don’t worry, I’m sure it won’t be too long before I am updating this post with more dice.