December and January are the busiest time of the year for FPL, games come thick and fast. Unfortunately November coincided with me losing my job and starting to lose interest in FPL. I kept checking my team for injuries and suspensions, and making forced transfers, but these two months saw a rather laid-back approach for me. Did my rank suffer? 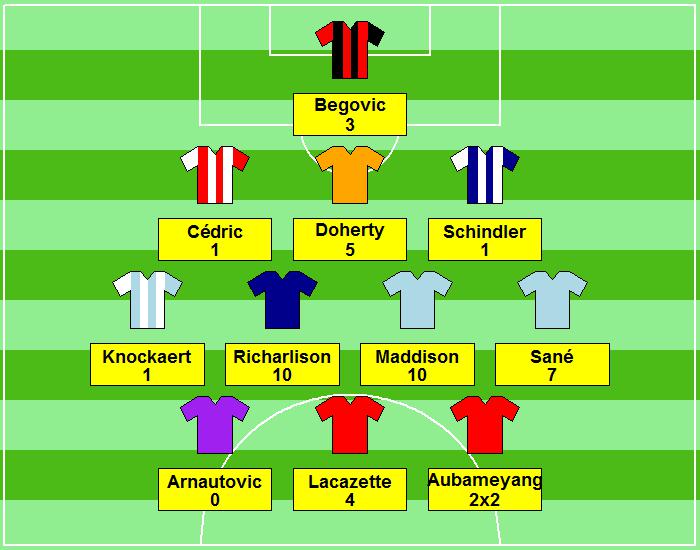 This was a massive week in the season. The most popular transfer this week was Aguero to Kane. Aguero had picked up an injury and Kane had fantastic fixtures. I had been planning to make this transfer this week even before Aguero’s injury. However I was heavily influenced by the North London derby the previous week. Spurs looked sluggish, and Lacazette and Aubameyang combined well together. I had an expectation that the Arsenal pair would be played together more often resulting in lots of goals and that even Kane would be rested. None of this happened, and Lacazette for example wouldn’t play a full ninety minutes for another eight game weeks.

This week was special because all twenty teams failed to keep a clean sheet. Unfortunately for me Sterling was rotated, my captain blanked and Fabianski saved a penalty whilst stuck on my bench. To rub it in, Kane scored 12 points. My final score was completely average, but it would have been twenty points higher if I had stuck to the plan of bringing and captaining Kane. 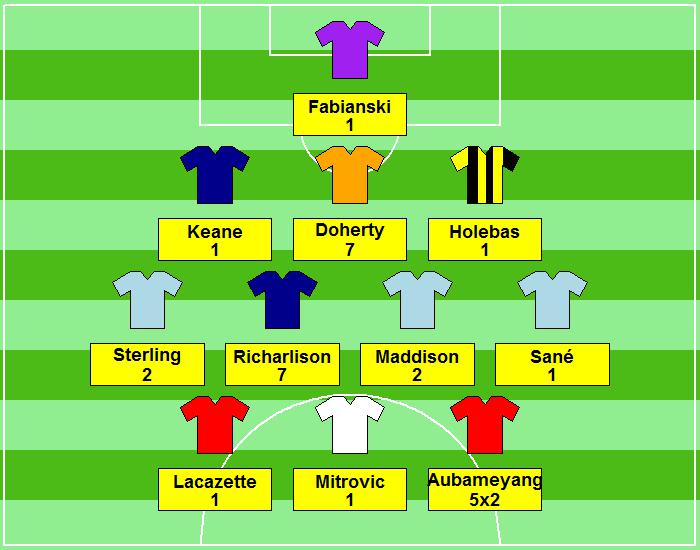 What you need after a disappointing game week is a bumper score. The very last thing I needed was a Salah hat-trick. Aubameyang scored a goal, and Kane blanked, which made me feel better about the previous week, but a Salah bonanza when heavily captained was a disaster. He scored twenty-one points, wrecking my score and my rank. Most of my players blanked, leaving me with an embarrassing 34 points.

These two game weeks really left me feeling hopelessly behind. I decided to take FPL less seriously and see what ground I can make up before the double game weeks in Spring, which can feel like the main event in the FPL calendar. I also had a number of niggling problems with my squad which I kept being unable to fix. I had wanted to get rid of Cedric who was suspended and Knockaert who was frequently rotated. Unfortunately Arnautovic was injured so I had to bring in a new player. I chose Mitrovic, who only scored one point this week. This is a difficult game to play when you are unhappy with your squad. My policy of not taking any points hits was probably starting to affect my enjoyment of the game. For example I really wanted Felipe Anderson, but I couldn’t bring him in without taking a points hit. Watching players you wanted score 12 points is painful.

The big news this week was that Solskjaer was announced as the Manchester United interim manager, which a great run of fixtures to start with. Looking back I should have gambled on Manchester United assets earlier, but I found Pogba frustrating to own last year, and I didn’t foresee Solskjaer favouring pacy strikers over Lukaku and Sanchez. As it was, they started the new era with four goals and Rashford getting 14 points. 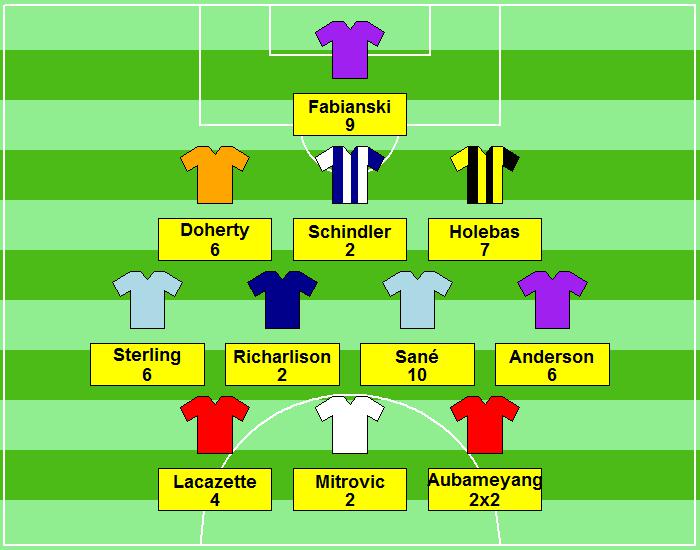 This was my first good week of the season. A lot of players got points this week, without anyone getting a huge score. In my team new signing Felipe Anderson got an assist, Holebas chipped in with a goal and Fabianski made a huge number of saves and scored nine points. I continued to stick to captaining Aubameyang who continued to let me down. Overall I had a good week in an average week for FPL. 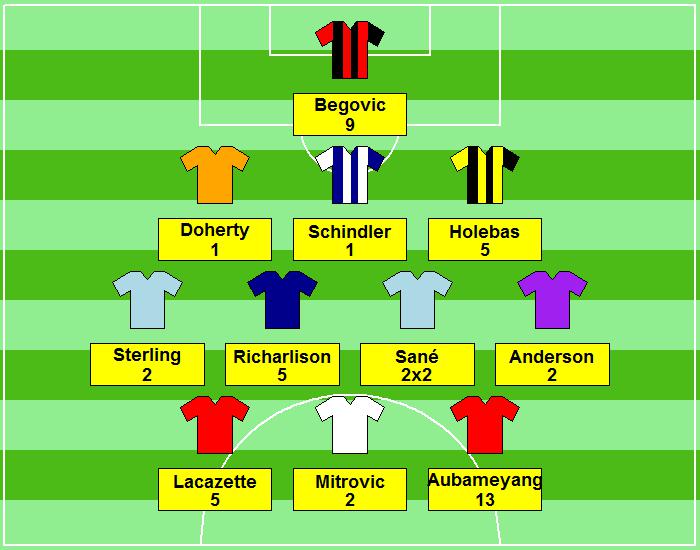 This week is memorable for a spectacular victory for Palace, beating reigning champions Man City. I am relatively well invested in Man City with both Sterling and Sane. I captained Sane, after my continuing frustrations with Aubameyang. This was a big mistake because this was the week where many of the most expensive players scored. Aubameyang, Salah and Kane all scored big. After captaining Aubameyang for three straight disappointing weeks, I missed out on doubling his 13 points. Since everyone has a few big players, but can’t have them all, captaincy was very important this week. If I had captained the right player, I would have been comfortably above average, but instead I was comfortably below. This has become a recurring theme for me.

Another big story this week was Man United scoring five, with all their attacking players getting returns. They represent another missed opportunity this week. On the other hand, my goalkeeper scored nine points again, but this time it was Begovic. 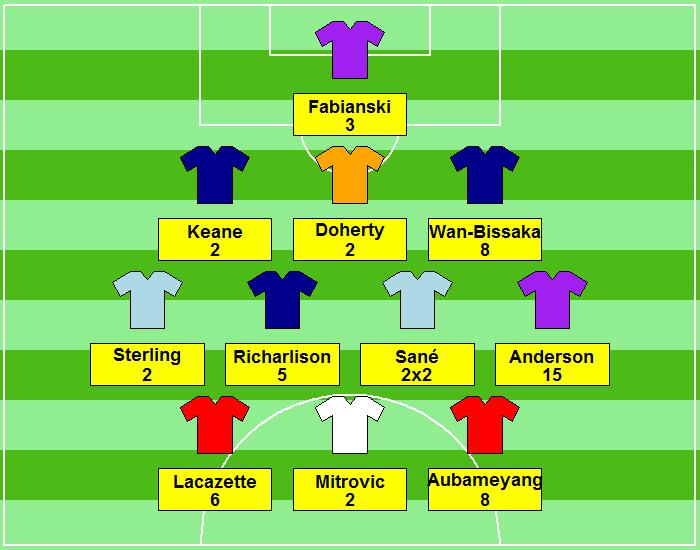 This was the second highest scoring game week for the Top 10K of the season so far. A lot of popular players all scored this week. Unfortunately for me Liverpool, Man United and Spurs were all big scorers this week, whilst Arsenal and Man City were dropping points. I did get 15 points from Anderson, and my Arsenal strikers got modest returns, but this paled when compared to some of the big scorers this week. Salah, Hazard, Digne, Sigurdsson, Son, Eriksen and Pogba all scored well into double figures this week. Only having one of the big hitters was a big blow.
Normally 57 points is fine, but this week it was quite poor.

My transfer this week was forced. Cedric has been sat on my bench for weeks whilst suspended, but the new Saints manager wasn’t playing him when he became available again. I brought back Wan-Bissaka, easy contender for bargain of the season. He was an instant boost for my team, scoring eight points. 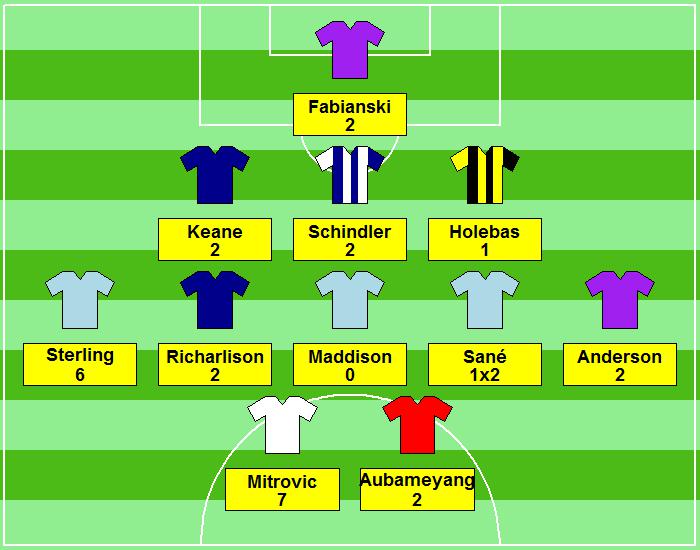 This was probably my worst game week ever. I don’t have complete records, but I have definitely not fallen below thirty points since I started taking FPL more seriously. My only returns this week were a Sterling assist and a Mitrovic goal. That was almost unbelievable. What made this week so bad? Maddison missed a penalty, my three defenders all conceded one goal, Doherty scored an assist but was on my bench. Had things gone differently this could have been a forty point week instead. That would have been bad, but not this catastrophic end to 2018.

Unfortunately for me, Liverpool and Man United were big scorers again. Firmino got a hat-trick and 17 points, Pogba got two goals, an assist and 18 points, whilst my nemesis Salah scored twelve points for the third week in a row. I can only hope that things start to change quickly, although it already feels too late.

December was another bad month for me. I failed to get above sixty points at all this month, despite there being five game weeks to play with. On top of this I finished the month, and the year, with a catastrophic game week and my lowest ever score. Furthermore, I made the mistake of forgetting to use a free transfer, missing an opportunity to shake up my team.

My faith in Arsenal and Man City was badly punished, while Liverpool, Spurs and Man United were the stand out teams this month. I’m starting to think my original team with Firmino, Salah and Mane would be better positioned than my current team. My cheap defenders have also failed to deliver. I think next season I will have to try a more conventional team structure. Hopefully January will represent a new start for my team. 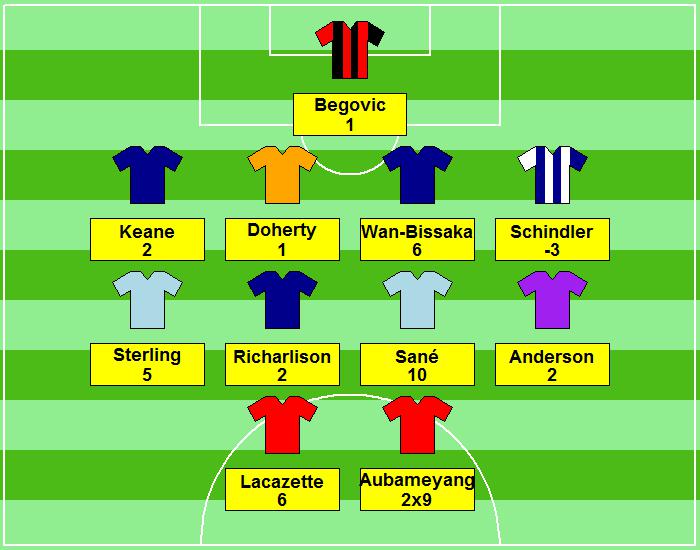 This was a week of ups and downs. Five players got returns, and for the first time in seven weeks my captain got a good score. Unfortunately Schindler’s red card pushed me below the average. I continued to miss out on Spurs players as both Son and Kane got good returns.

The game of the weeks was definitely the challengers versus the champions. Man City were victorious, with returns for Sane and Sterling whilst keeping Salah quiet, which was great for me. I didn’t make any transfers this week, so all in a quiet and slightly disappointing game week. 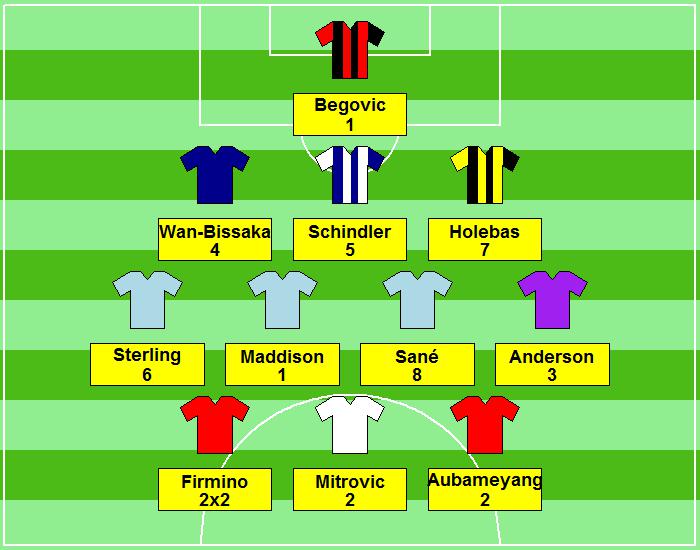 Yet another completely disappointing week for me. I decided to bring in and captain Firmino after his good form, and my continuing frustration with Lacazette being rotated all the time. As is the norm for me this season, my captain blanked, whilst the safe pick Salah scored 11 points. There were also a lot of clean sheets for the big teams, which further raised the averages. Apart from Salah, there is no standout player this game week, which is why I found the TOP 10K average to be surprisingly high.

Most annoyingly Arsenal failed to turn up against West Ham, so Aubameyang blanked and Fabianski scored nine points whilst sat on my bench. 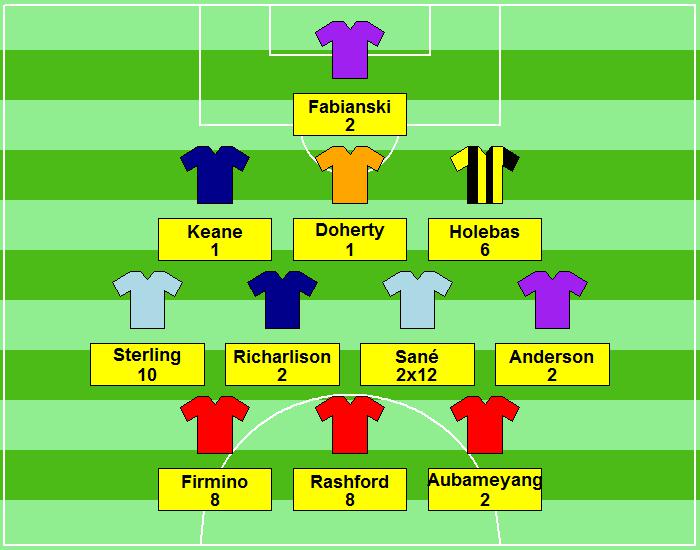 I finally score above my weekly 60 point target for the first time since November, but I still can’t beat the Top 10K average. Last week’s signing Firmino repaid my faith with a goal, but his team-mate and my nemesis Salah scored 15 points in a crazy 4-3 win over Palace. Fortunately my captain Sane nearly matched that with a goal and an assist.

I finally lost patience with Mitrovic, who had scored only one goal for me. I brought in Rashford who made an instant impact netting eight points. My defenders also all managed to chip in with points, with each one getting either an assist, a clean sheet or bonus points. 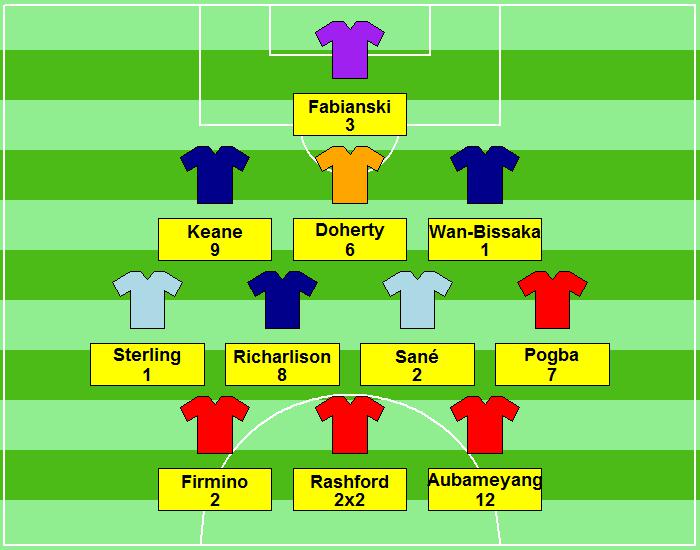 This was a week to remember for shock results. Liverpool, Chelsea and both Manchester clubs failed to beat teams much lower in the table. My Everton players had a good week for once, Richarlison getting a goal, and Keane maximum bonus points. This was very satisfying as he has often been in the shadow of fellow defender Digne, who has had some fantastic hauls. This week however Digne got a red card, helping to push me comfortably above the Top 10K average. Once again Aubameyang had a great gameweek whilst unburdened of my captains armband. Because of the shock results only five of my players got returns. Had I gotten the captaincy right, this would have been a great week.

I made a double transfer this week. Normally you should have a cheap midfielder or striker to warm the bench. I haven’t had this for a long time, so I brought in Redmond to warm the bench, and man of the moment Paul Pogba. Given new freedom by Solskjaer, he has been fantastic this season and he was a great transfer this week, scoring a nice seven points. I’m a big fan of Pogba, so I should have had him in my team much earlier, but I was stupidly put off by bad memories of a red card last season, when I had to transfer him out a week after bringing him in. I should have viewed that as a freak incident and brought him in much sooner.

January felt like things where slowly starting to turn around for me, but in fact I slipped further down the table. I assumed after some good weeks and successful captain picks, I might have gained ground, but this wasn’t to be. Strangely I am starting to feel more positive about FPL, despite my terrible position in the league. We are now approaching the hardest part of the season with out first double game week of the season to see in February. Join me in two months to see how I got on.