This is the second part of my review of the FPL 17/18 season. You can read the first part here. In this post, I’m focusing on the captaincy decisions and special chips. I’ll look at my decisions and those of the the top ten thousand managers in the world, known as the top 10K.

I think my general strategy was good enough to finish in the top 10K, but my captain choices and  use of the chips were a big let down. Salah was the undisputed player of the season, smashing all kinds of records and I only captained him five times. I was slow to notice how consistent he actually is. Kane was overwhelmingly my most captained player, wearing the armband for 11 weeks. I avoided him in August, and brought him in for September as soon as he started scoring. He was a good captain for me in the autumn, but I captained him a lot in the spring as well, when I should have been captaining Salah. 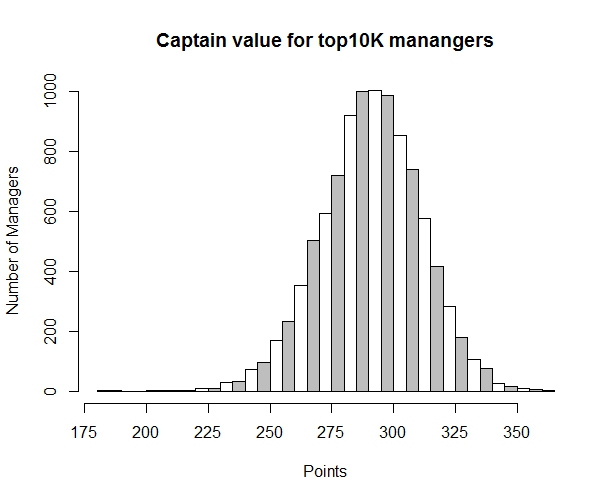 My captains, ignoring the triple captain chip, scored a total of 264 points. The average top 10K player scored 291 points from their captain. Had I been able to match the top players at selecting my captain, I would have finished inside the top 10K comfortably.

The most damning statistic is that I vice-captained Salah 13 times. This meant that my vice captains scored a total of 290 points, far outscoring my normal captain.

I also used my chips poorly. The easiest chip to analyse is the triple captain chip. I captained Lukaku in the double game week in game week 34. He didn’t play 180 minutes, but he did manage 8 points. I had assumed this was a little under the average for the triple captain chip, but this was by far the most common score for the TOP 10K managers and the average was 7.3 points. 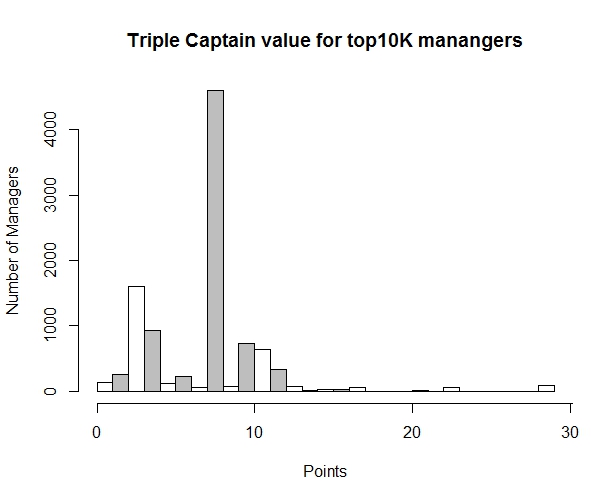 The free hit chip is harder to analyse. The simplest approach is to count the single week score. I did played in game week 34, scoring 105 points, thanks to Salah going crazy. This was the average number of points for top managers using the chip in this week, and much higher than the  82 points that the top managers averaged in their free hit week. 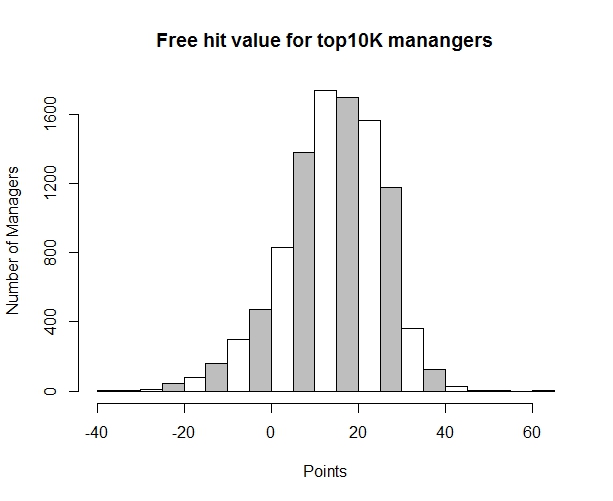 Whilst my 13 points versus the average of 14 points seems like only a minor concern, I think I would have got far more points from it had my second wildcard been available. The last quarter of the season is very difficult to navigate, with two blank game weeks and two double game weeks. I used my free hit in the very first unusual week, when in fact this is the week you have the longest to prepare for.

The bench boost is the most painful to look at. I scored a pitiful THREE points from my bench boost. I had committed myself to the extremely cheap defenders and decided that game week eleven had such good fixtures for all my defenders, that this was the week to bench boost. I could not have been more wrong. Schindler picked up a red card from the bench, and I only got two clean sheets, which were already from my starting eleven.

On the other hand the average TOP 10K manager scored 17 points from their bench boost. Some achieved much higher numbers. 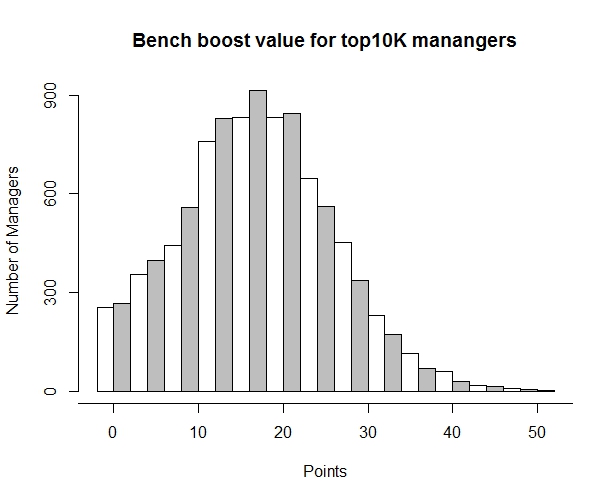 Join me next time as I conclude this series with a look at my fantasy football philosophy, and see if I have learnt anything from this season.