Fourteen Questions for the 2022/23 FPL Season

I love building my team for the new FPL season. There are so many possibilities and so many things to consider. A good start can set you up to have a great season and I love doing my research for the new season. Here are the fourteen questions I am thinking about as I build my team.

#1 How many Players Should we Pick From the Top Five Teams?

When the fixtures came out something that stood out was how good the fixtures are for the top five teams. Chelsea probably have the worst fixtures but games against Leeds, Everton and Southampton are still tasty. The other teams all have two fixtures in the first six against promoted teams. Once I saw these fixtures I knew my team would be based around getting as many big hitters into my team as possible.

Then the prices came out, and across the board prices were lower than expected. This is an example of a squad whose first eleven is entirely made up of players from the teams who finished in the top five last season. They all have great fixtures, and are affordable. This then raises the question, why would you pick players from worse teams? The other teams have worse fixtures and as this team shows, you don’t need to find bargains to fit in all the big names. I don’t see any incentive to include many players from other teams. Therefore my focus in this preview is on deciding which players from these teams to pick, and which players from other teams are exceptional enough to make our squads. 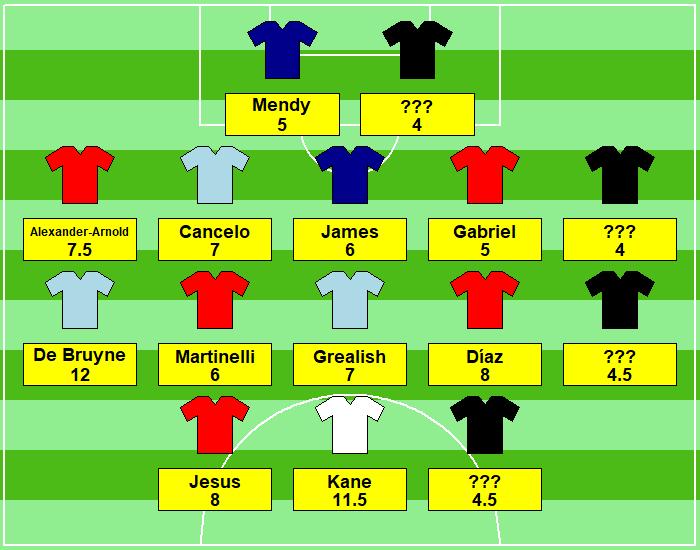 #2 Who are the Best Goalkeepers this Season?

I don’t normally get excited about goalkeepers but the prices this season have turned a lot more goalkeepers into viable picks. Managers have consistently preferred cheap 4.5 million keepers who get lots of points for saves and bonus points to supplement clean-sheets. That approach is still viable but this year the keepers can be a cheap way to get a nailed player in one of the best defences in the country.

#3 How Many Premium Defenders Should You Have?

The biggest shift in FPL over the last few years is that premium defenders are far too good. Fullbacks are now some of the most creative players in the Premier League. Players like Alexander-Arnold, Robertson and Cancelo are some of the highest scoring players in the game, whilst being far cheaper than midfielders or strikers that will probably score fewer points. The combination of seven points for a goal, four points for a clean-sheet, a ton of assists and a steady stream of bonus points is just too much to ignore. I can’t see a reason to not include at least three premium defenders.

Premium midfielders are usually the best options for captaincy and the highest scoring player each season is usually a premium midfielder. They all cost ten million or more but you can expect a lot of points for that investment.

#5 Who is the Best in the Eight Million Pound Bracket?

There is a fascinating cluster of midfielders that are all priced at £8 million or £8.5 million in the case of Bowen. All of these players are great options and were either explosive last season or have a proven track record. If I had the funds I would love to have more than one but I think at least one is essential so you can easily move from one to another as form and fixtures change. But deciding which one(s) to pick is hard.

#6 Are Strikers Back In Fashion?

Last season strikers were extremely underwhelming. The best attackers at Manchester City and Liverpool were all midfielders. Kane started slowly, Ronaldo was inconsistent and Lukaku was a total flop. Given that strikers only get four points for a goal and don’t get extra points for clean-sheets the points system also incentivises playing midfielders over strikers. Is this going to be the same again this season? Kane is back to his best and other top teams have signed new strikers. If players like Haaland, Darwin and Jesus live up to expectations this could be a great season for forwards.

#7 Are there any Strikers Worth Having Below Eight Million?

One of the reasons Jesus and Haaland have such high ownerships is that the cheaper forwards are pretty unappealing. This is a really mixed bag of players. Some are just over priced, others have bad fixtures and others are rotation risks. If one of them does emerge later on as a good option it could be a reason to move against the template.

#8 Are Cheap Defenders Worth It?

#9 Who are the Best Mid-Priced Midfielders?

#10 Who are the Best Bench Options?

We can’t just pick the big names from all the big clubs and we need to fill out the bench with cheap options so we can spend as much as possible on our first eleven. There are some stand-out options for our benches this year.

#11 Are Manchester United Back?

Manchester United were a total mess last season which suggests they should be avoided in FPL this season. However they look much better in pre-season and Ten Haag is a top coach. If you do believe in Manchester United this season and want one of their players it’s hard to know who to pick. Ronaldo and Fernandes are the big point scorers but it’s looking very doubtful Ronaldo plays and both of them are probably too expensive as they stop you from taking players like Salah and Haaland who have much better fixtures and are much more reliable FPL assets.

However Sancho, Rashford and Martial are all intriguing. They all have real potential and offer you savings compared to players at other top clubs. However Sancho hasn’t shown his best at Manchester United, Rashford needs his confidence back before he becomes a pick and Martial’s minutes are uncertain because of Ronaldo. I have had a few drafts with Martial upfront because there aren’t many striker options but he has historically been a frustrating player to own because he isn’t clinical enough to convert all the chances he gets.

I’m pretty sure Manchester United will be good at some point and we will want to own their players but the fixtures aren’t as good as other teams. I’m happy to wait and see but I know that their prices will go up very fast because Man United have legions of fans around the world who love owning Manchester United players. There is definitely profit to be made by owning them early but I don’t like the fixtures enough to take the risk.

Dalot is perhaps the most tempting option because he’s cheap enough to bench during the Liverpool and Arsenal games but I don’t think my structure will have a slot for £4.5 million defender because the premium defenders are so good.

#12 What Can We Expect from Chelsea this Year?

This might be the toughest question for me. Chelsea are one of the best teams in the league and for the first half of last season they were head and shoulders above the rest of the league. I’ve already raved about how good wingbacks and fullbacks are in FPL and James and Chilwell are without question two of the standouts in this category. Wingbacks were often central to Chelsea’s attack last year so James and Chilwell both had massive hauls at times and they are both only six million. Mount could easily be the highest scoring eight million player and Sterling has a fantastic FPL pedigree. Their home fixtures aren’t great but the away fixtures are very tempting.

If I had confidence in Chelsea I would absolutely be putting James in my team and strongly considering Mount. But there are some reasons to doubt Chelsea. The defence has lost Antonio Rüdiger and it might take time for the players to get used to a new line-up. There was talk of Chelsea switching to a back-four which might reduce the attacking threat of James and Chilwell. After a terrible 4-0 defeat to Arsenal in pre-season this no longer seems to be the plan. After that defeat Tuchel was very pessimistic and suggested the team might not be fit enough to start the season. There are also a number of players being linked with moves away which might undermine the team. I don’t know what to expect from Chelsea. It seems completely reasonable to put three Chelsea players in your team or none. Whether you decide to invest or ignore, you can make a convincing argument in either direction.

#13 Can We Rely on Pre-Season Results?

One of the eternal pre-season dilemmas is deciding whether pre-season results matter or not. I tend to favour players who score in pre-season because it has served me well in the past, but it’s never super reliable. I won’t go through every team, but here are somethings I found interesting in pre-season.

#14 How Good is the Template this Year?

There is always a template every year, but I don’t think I have ever seen it this strong, both in terms of how high some ownership levels are and how good a team you can pick by simply picking the most popular players. Alexander-Arnold, Salah and Jesus in particular all have sky-high ownership and are rightly the most popular players in the game. This is a reflection of how good the Liverpool and Arsenal fixtures are and suggests that Trent and Jesus in particular have been priced very kindly.

I currently have eight of these players in my current draft and I could easily have more before the game-week one deadline. I’m not sure how good the Chelsea defence or the Wolves attack will be but James and Neto are still very good picks. The player I dislike the most is Greenwood who like all 4.5 million forwards isn’t going to play. It’s totally fine if your fifteenth player isn’t going to play but one that is this popular is at risk of dropping in price so I would avoid Greenwood in particular. 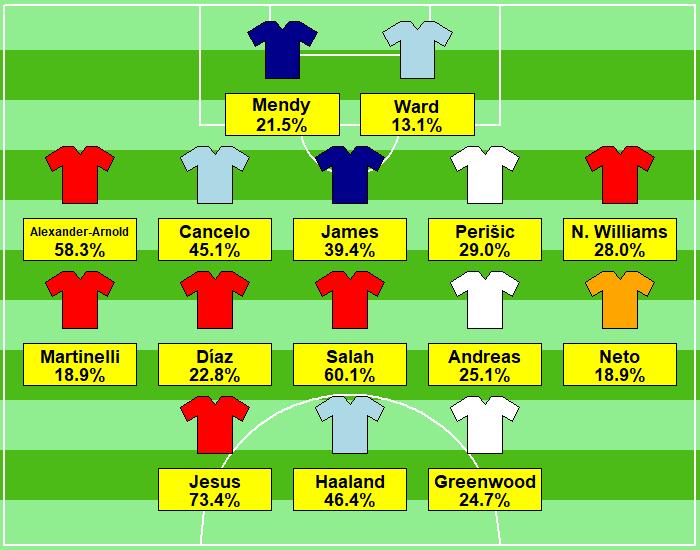 Otherwise my team is going to be pretty similar. I prefer Robertson over Diaz and I’m happy to triple up on the Arsenal attack by adding Saka alongside Martinelli and Jesus. I’m also going to get Kane for game-week one against Southampton and then swap him for Haaland against Bournemouth in game-week two.

Having such a strong template could have really big implications for the game. It will mean the average scores should be much higher and the small differences between teams will have a bigger impact on your rank. Or will more divergence happen when the fixtures improve for the smaller teams? At least to start the season my team will be very template. Not because I want to play it safe but because the template has really aligned with the players that I want to pick. It also makes captaincy more important as a way to differentiate yourself from other managers. Will managers take riskier picks as they try to find an edge?