I recently discovered a fascinating sudoku puzzle called Small Murders by DiMono which was featured on a youTube video by Cracking the Cryptic. I solved it in a really methodical way and I really enjoyed this method of solving a sudoku so I thought I would share what I learnt.

The puzzle is shown below. This is a 2×2 sudoku so it uses the digits 1 to 4. Each digit must appear in every row, every column and each of the four quadrants. This sudoku doesn’t have any numbers given to you, but instead has four arrows around the side. These give the sum of the numbers along the indicated diagonal. 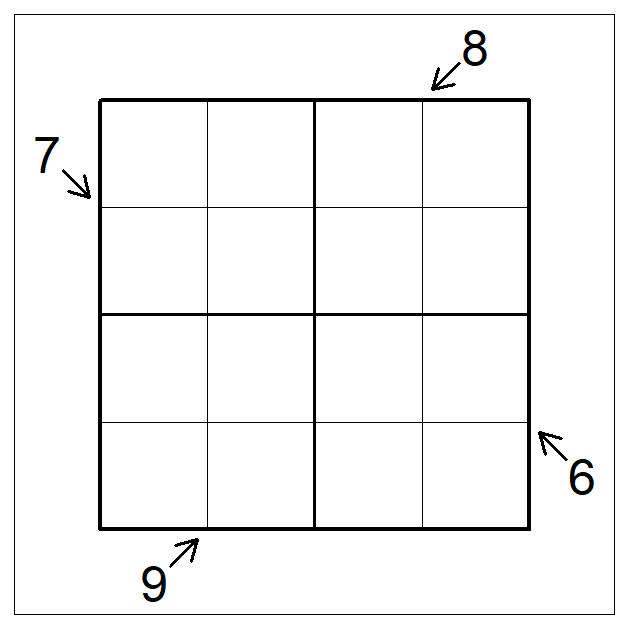 The clues are all diagonals of length three. Since these are so important to the puzzle I’m going to call them three-diagonals so I can talk about them.

What’s in the corners? 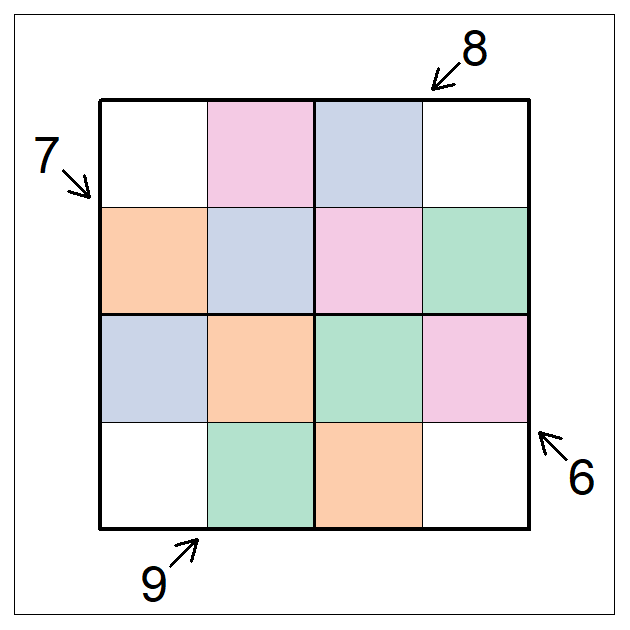 My first revelation was that none of the clues overlap. If you give each clue a colour, and start colouring in the sudoku, we can see that they relate to 12 different cells. In fact every cell apart from the corners is covered by exactly one clue. If you add up the four clues 6+7+8+9, we learn that the shaded cells add up to 30. Because the finished sudoku contains 4 of each number, the sum of every cell must be 40. This means the four corners must add up to ten.

How can we do this? Let’s look at the options; 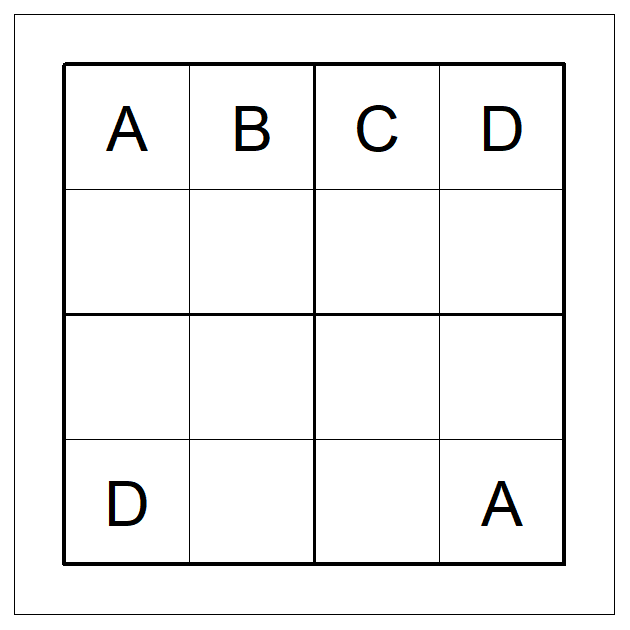 This sudoku is then really easy to solve, and it must look like the one below. We don’t know what values A, B, C and D have but it doesn’t matter. Look at where the arrows would be on this grid. We would have BAC along two arrows and BDC along the other two arrows. This would give us two pairs of arrows with the same total. However the Small Murders puzzles has a different total on every arrow. 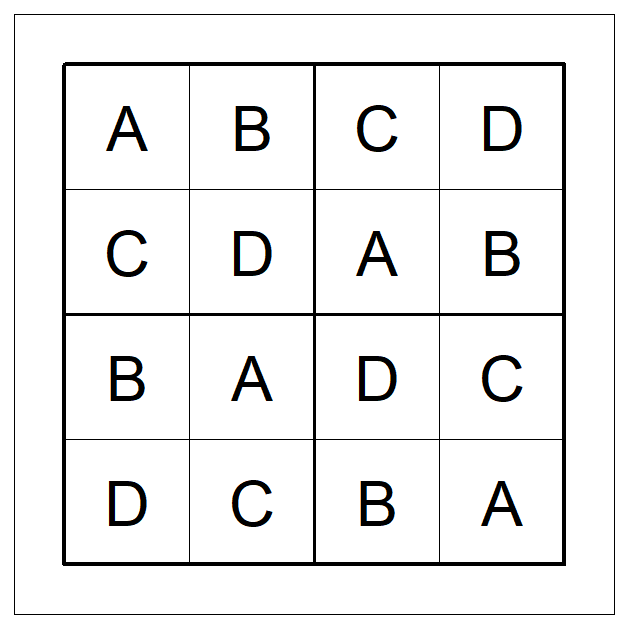 This has eliminated all but one option for the corners so we now know the corners must contain all four digits.

A Deeper Pattern and Finding Repeats

If you look at the above sudoku closer a pattern stands out. The letters in the four corners are the same as the letters in the centre. In fact this isn’t just true for this 2×2 sudoku but all of them. 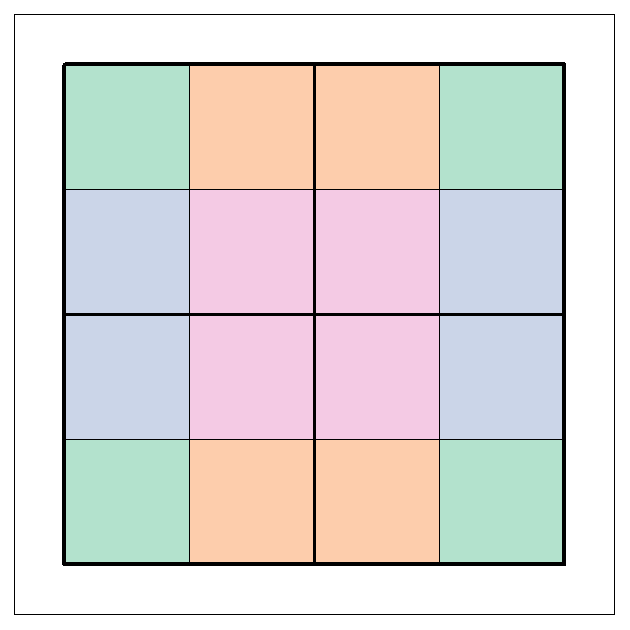 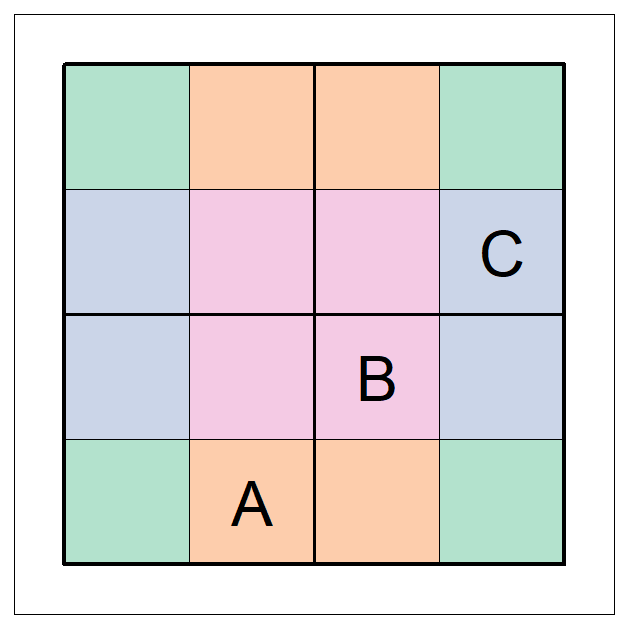 We can use this pattern to learn something very interesting about the three-diagonals. Look at the above diagram and look at where the other B’s must go. In the bottom row, you can only put a B in the left-hand corner. Similarly in the right-hand column, you can only put a B in the top corner. This gives us two B’s in the corners. This means if a sudoku has a three-diagonal with three unique numbers on it, a number will appear in the corners more than once.

What does this tell us about Small Murders? Well it means we can’t have any three-diagonals with all unique numbers because we know all our corners are different numbers. Put another way, it means every three-diagonal includes a digit that is repeated more than once.

We now know that every three-diagonal must include repeated digits. Let’s look at the different ways of doing this.

Some of the options are triple digits but this is actually impossible. There must be a 2 in a corner and the eight must include a 2 because both options above include a 2. There are only four 2’s in a 2×2 sudoku so there aren’t enough twos for 6=2+2+2. The same logic applies for 9=3+3+3 because the seven must include a 3 and a corner includes a 3. 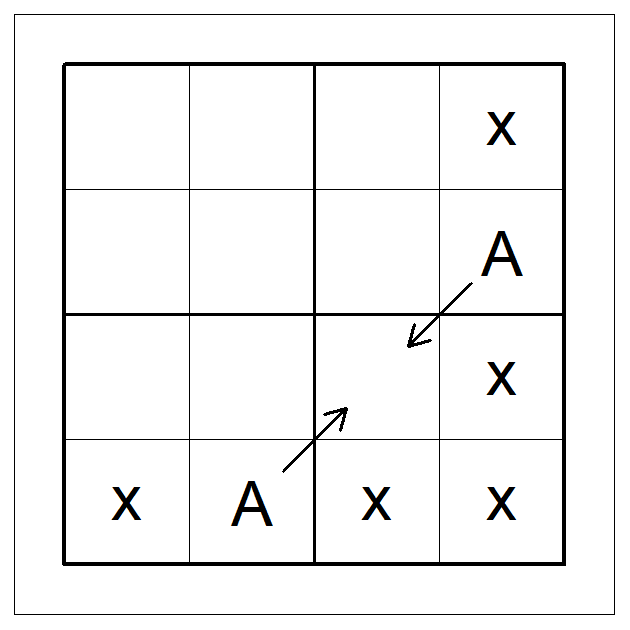 If you put the same digit in the two cells as shown, there is only one place to put that digit in the bottom-right quadrant. This would mean we have a triple digit three-diagonal, which we have already ruled out.

We can then put the repeated digit in the middle of each three-diagonal. This is shown below. 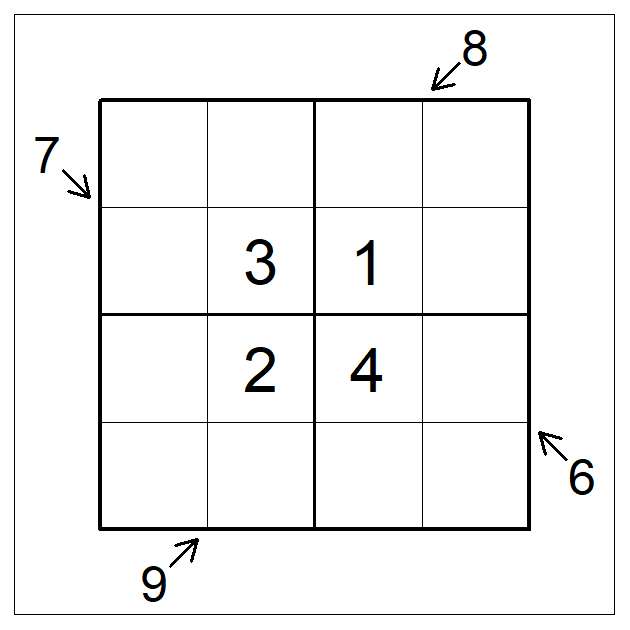 If we look at the six clue, we know there is a four in that three-diagonal. It can’t go next to the four in the middle, so it must go at the top. We can repeat this logic with each three-diagonal for the digit that appears only once in that diagonal. This gives us the sudoku below. 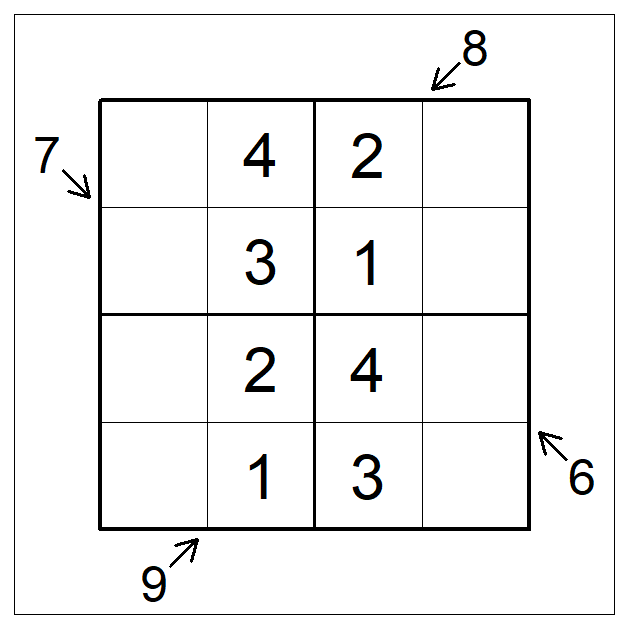 From here the sudoku is really easy to solve. The final solution is below. I hope you enjoyed following along. 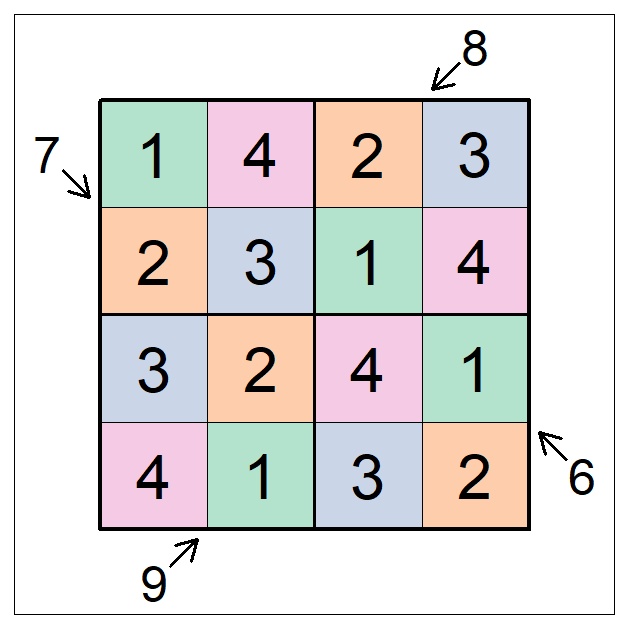