It’s time for the next instalment of my FPL season, and I started October with my first wildcard of the season. Read on to find out how it went. 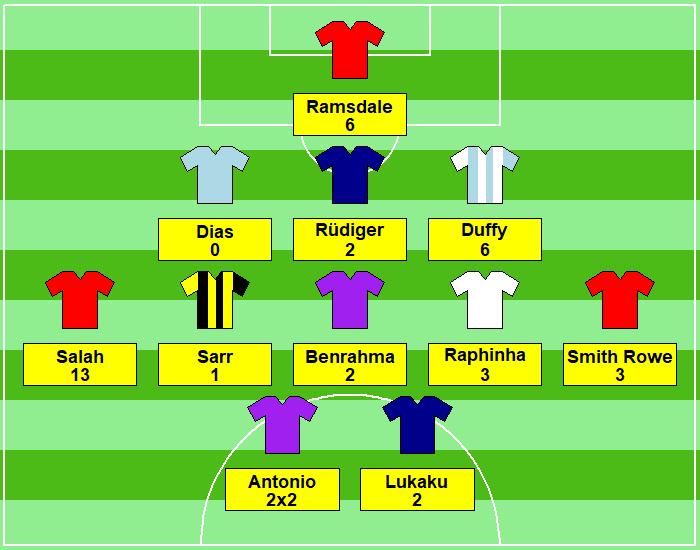 There were huge fixture swings this week, so I pulled the trigger on my wildcard to try and take advantage of it. For example Chelsea’s fixtures got a lot easier so I brought in Lukaku, Rüdiger and Alonso. Unfortunately Alonso didn’t play and the other two blanked. Leeds’s fixtures improve so I brought in Raphinha whilst Man United’s get much worse, so I sold all my United players.

In defence I brought in Ramsdale and Duffy who both kept clean-sheets on their debut in my team. Unfortunately I also got rid of Son who got 10 points from two assists and bonuses. I think I would have scored a couple more points if I hadn’t played my wildcard but I hated my previous team, so I can live with my decision. My biggest mistake however was backing the Manchester City defence against Liverpool and Salah in particular. The game ended 2-2 with 0 points for Dias which hurts and 13 points for Salah who I didn’t captain. This was my worst score of the season but there is still plenty of time to make up ground on the managers above me. 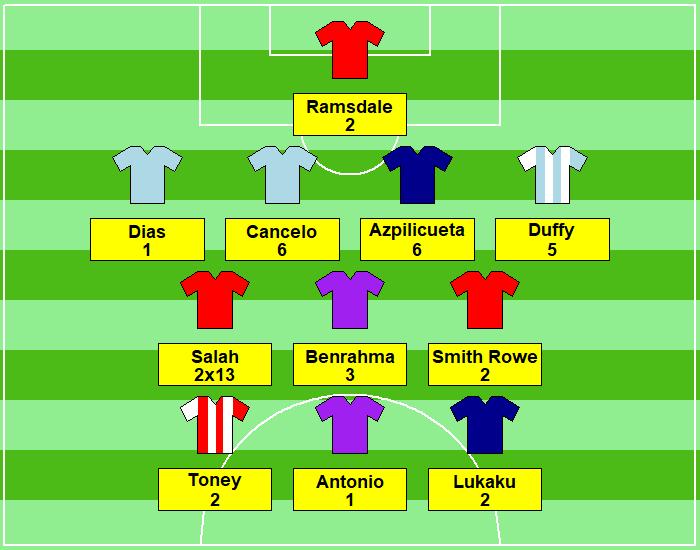 One of the interesting things about reflecting on my game-weeks via my blog is that I spot trends that I wouldn’t have otherwise noticed. Game-week eight is a practically a mirror of the previous game-week with only Salah and my defenders getting any returns. The big difference is that I captained Salah this time, so I finished with a slightly better game-week rank. There isn’t much more to add. I made one transfer shuffling my Chelsea defenders around. After seeing Alonso get benched last week, I brought in Azpilicueta. This worked, but then Rüdiger was benched so I didn’t fully capitalise on Chelsea keeping a clean sheet.

There were two notable results this weekend with Liverpool thrashing Watford 5-0 with Firmino getting a hat-trick and an assist and Manchester United losing 4-2 to Leicester. This second result was fascinating because it led to a fascinating captaincy dilemma in game-week nine. 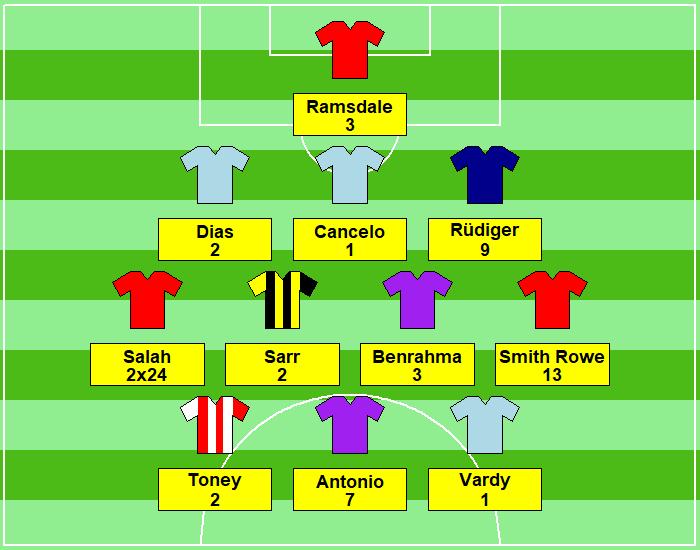 This was a turning point in the season I feel. For some reason a lot of managers didn’t fancy Salah away at Manchester United and were in love with Chelsea’s fixture at home to Norwich. I completely understand the allure, but after seeing United’s defence last week I felt Salah was the best choice. I was rewarded for my faith with Salah getting a hat-trick and an assist for a mighty 48 points including captaincy. After this week Salah would be captained by 95% of all active managers, a rate we have never seen before in the history of the game.

The Chelsea game was also spectacular. Lukaku would have been an interesting captaincy option but he got injured so I transferred him out for Vardy. Vardy completely blanked, but I think a lot of players tried to capitalise by buying Kai Havertz who would be playing upfront for Chelsea while getting 5 points per goal as a midfielder. I’m so glad I stayed away because Chelsea won seven nil but Havertz wasn’t involved in any of the goals. Rudiger had plenty of shots but I was happy with his clean-sheet and his assist. Mason Mount was the stand-out player matching Salah with hat-trick and an assist. However his popularity was far lower than Salah’s, so it didn’t have the same impact on FPL.

Antonio rewarded my patience with a goal and Smith Rowe got a goal an and assist to help push me past 90 points for the first time this season. Unfortunately I still couldn’t make the top one million players in the game-week rankings. This is pretty crazy and shows how difficult the game is getting. A 81st minute penalty to Brighton stopped my Manchester City defenders getting clean-sheets and Watford scored five after being two down but Sarr like Havertz had no returns. Despite these disappointments I still rose to my highest rank of the season and hopefully I will be able to continue climbing the table. After two rather underwhelming weeks, it was a relief to have a great week post wildcard. The wildcard is so powerful and wasting it really stings. 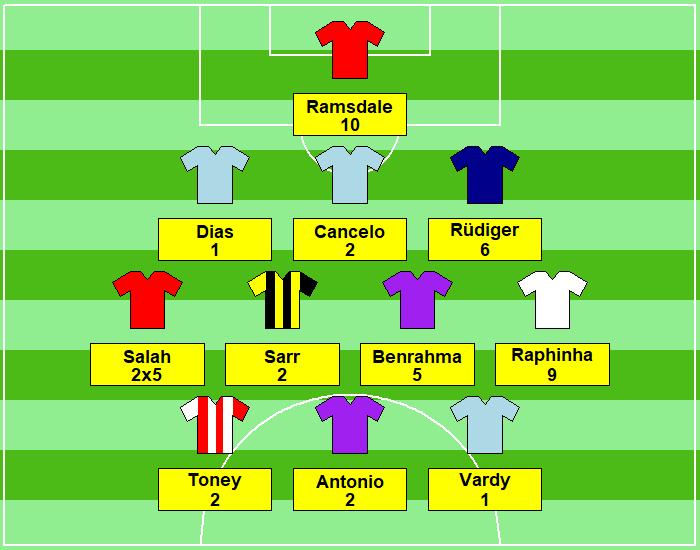 For the first time this season I got my third green arrow in a row. It was pretty actually a pretty underwhelming week and a small frustrating mistake kept it from being much better.

Games this week included a few shocks like Crystal Palace beating Man City 2-0 and Brighton drawing 2-2 with Liverpool. Annoyingly West Ham scored 4 past Aston Villa and I only got one assist from the Antonio and Benrahma combination. Reece James was the highest scoring player of the game week with 2 goals and a clean-sheet for 21 points. It’s frustrating to never own the right Chelsea defenders. Ronaldo had a good game with a goal and an assist against Spurs which meant Nuno lost his job and Solskjær kept his. This suppressed scores across the board and meant 50 points was enough for me to get a red arrow.

October was a good month for me, and I rose nearly 250,000 places in the overall rankings. Taking into consideration that I played my wildcard however, I didn’t capitalise on such a powerful chip as much as I had hoped. It feels like my rise has mostly been through avoiding terrible weeks rather than having any fantastic weeks that shoot you up the ranks. 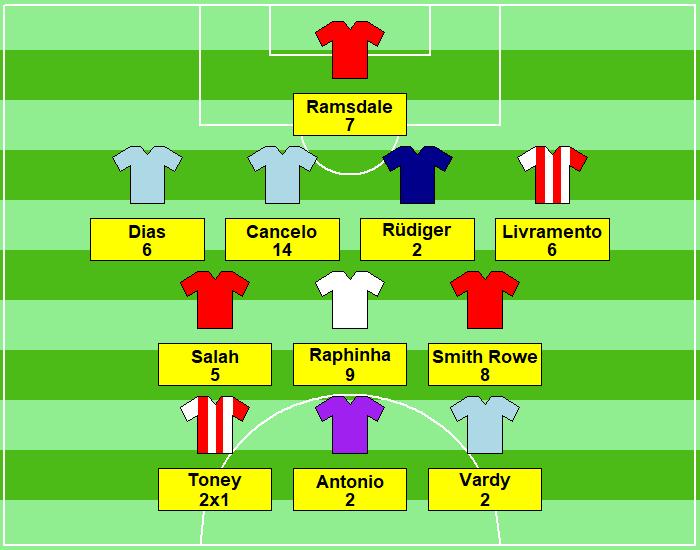 What a strange week. I captained my lowest-scoring player, but still scored 63 points, which is normally a good but not brilliant score. This week however it was very high, giving me my second best game-week rank of the season so far.

A healthy seven players got returns this week, with goals for Raphinha and Smith Rowe, whilst three of my four defenders got clean-sheets. Cancelo was outstanding for Man City getting both assists in their 2-0 win over Manchester United. My strikers however were all disappointing, but this is true for almost all strikers in the game at the moment. It seems like apart from Salah, most of the best FPL assets are all defenders. I don’t know how long this trend will last, but I can’t remember a time in FPL where almost all of the strikers have been this underwhelming.

With Duffy getting rotated I finally brought in Livramento who has been a revelation for Southampton this season. Their defence has been much better than expected this season and Livramento even looks good going forward. He’s a very popular pick and I’ve definitely been missing out on points over the last few weeks. He immediately rewarded me with a clean-sheet so that was satisfying.

My only regret is captaining Toney. He hadn’t scored for a while but the fixture against Norwich was too tempting. He blanked and even got a yellow card to make it more insulting. At least Salah was relatively quiet this week with a single assist to his name. 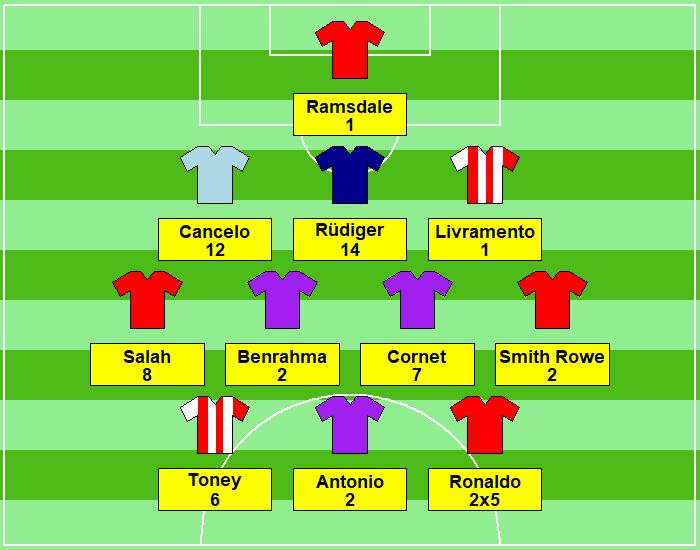 This was a topsy-turvy week. First my transfers. I was sick of Sarr not being involved despite Watford scoring plenty of goals in some games, and with them facing down Manchester United this week I got rid of him for Cornet who has been playing put of position up front for Burnley. In the end both players scored, but as Sarr missed a penalty, I ended up plus two points on this transfer.

My other transfer this week meant taking a four point penalty to get in Ronaldo for Vardy. Ronaldo managed to get an assist, so in reality the transfer only cost me one point. My gut told me that Man United were going to turn the corner and start performing and that Ronaldo would have a great game against Watford so I captained him over Salah. In hindsight Salah outscored Ronaldo by three points which could have been much worse. Watford pulled of a fantastic 4-1 win over United which was the final straw for Solskjær. The team’s performance was so bad I was immediately questioning whether or not to keep Ronaldo after just one week.

Toney finally repaid my faith with his first return in seven game-weeks. Otherwise this was another fantastic weekend for defenders across the board. For me Rudiger scored a goal, whilst Cancelo got an assist and maximum bonus with both players also getting a clean-sheet to finish with 26 points between them. Alexander Arnold was also fantastic with two assists and a clean-sheet which is really painful when you don’t own him because he is so popular. Other defenders to chip in with goals this weekend included Mings, Reguilón, Lascelles and Hanley. I can’t remember a season like this where defenders were so good, and strikers were so poor from an FPL perspective. 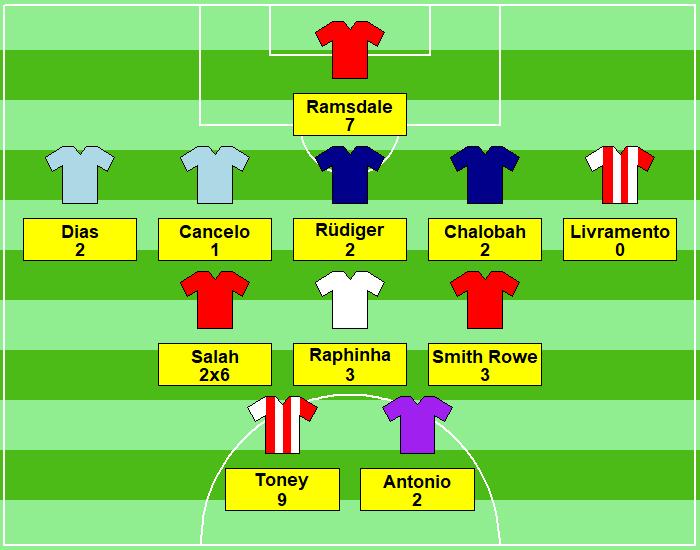 I made a big bold move this week and bought in Kane for Ronaldo. Tottenham’s game away at Burnley was then unexpectedly cancelled due to heavy snow so both he and Cornet were unable to play this week. My bench included Livramento who conceded four goals to Liverpool which meant he also scored zero points. All of my premium defenders played for once, but both Manchester City and Chelsea conceded, so Toney, Salah and Ramsdale got returns. It was a low scoring week but I still finished a point below the average. This was a very disappointing week. Jota and Vardy both got braces this weekend which is frustrating as they are both players I have had in my team this season. 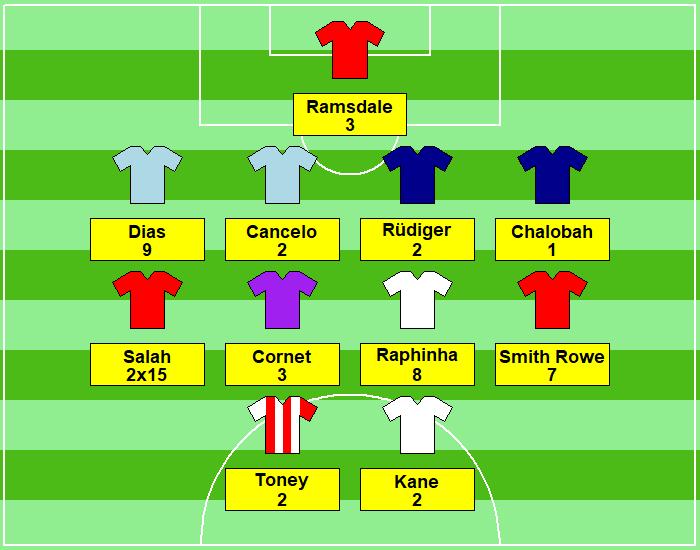 I ended November with my highest score since game week nine. Salah was the stand-out player this week with two goals in the Merseyside derby making him this week’s highest scoring player. Only Ronaldo and his brace against Arsenal coming close to matching him. There were very few clean-sheets available this week with all of the best teams conceding. Dias managed to score a goal to avoid my entire defence blanking. Raphinha and Smith Rowe also contributed goals to put me above the average for the week. Obviously my captain scoring 15 points is great, but Salah is so highly captained it makes much less difference to your rank when almost everyone gets the same points.

With two red arrows and two green arrows November was a lot more mixed than October. I fell less than 5,000 places though so the impact wasn’t too bad. Just as it felt like my season was turning around, my scores started to suffer. The hectic Christmas schedule is just around the corner, so there are plenty of chances to turn things around. Join me again at the end of January to see how I get on.