This is my first board game review. I’m starting with one of the smallest board games I own, but don’t let its diminutive size fool you. Read on to find out if it gets my recommendation.

Sprawlopolis is a co-operative city building game that can also be played solo. Its stand out feature is that it consists of just 18 cards. On one side you have the city blocks and on the other you have scoring objectives. Each time you play three cards are used to give you three objectives whilst the other cards are used to build your city. Once your city is complete you add up your points and try to beat the target score to win.

How do you play cards? Further cards must be played connected to the existing city. They can either connect at one edge as shown on the left, or overlap as shown on the right. You can’t play cards so they only touch at the corners or so they completely cover up another card. Lastly cards must always be played horizontally even if rotating them to fit vertically would be really convenient sometimes. 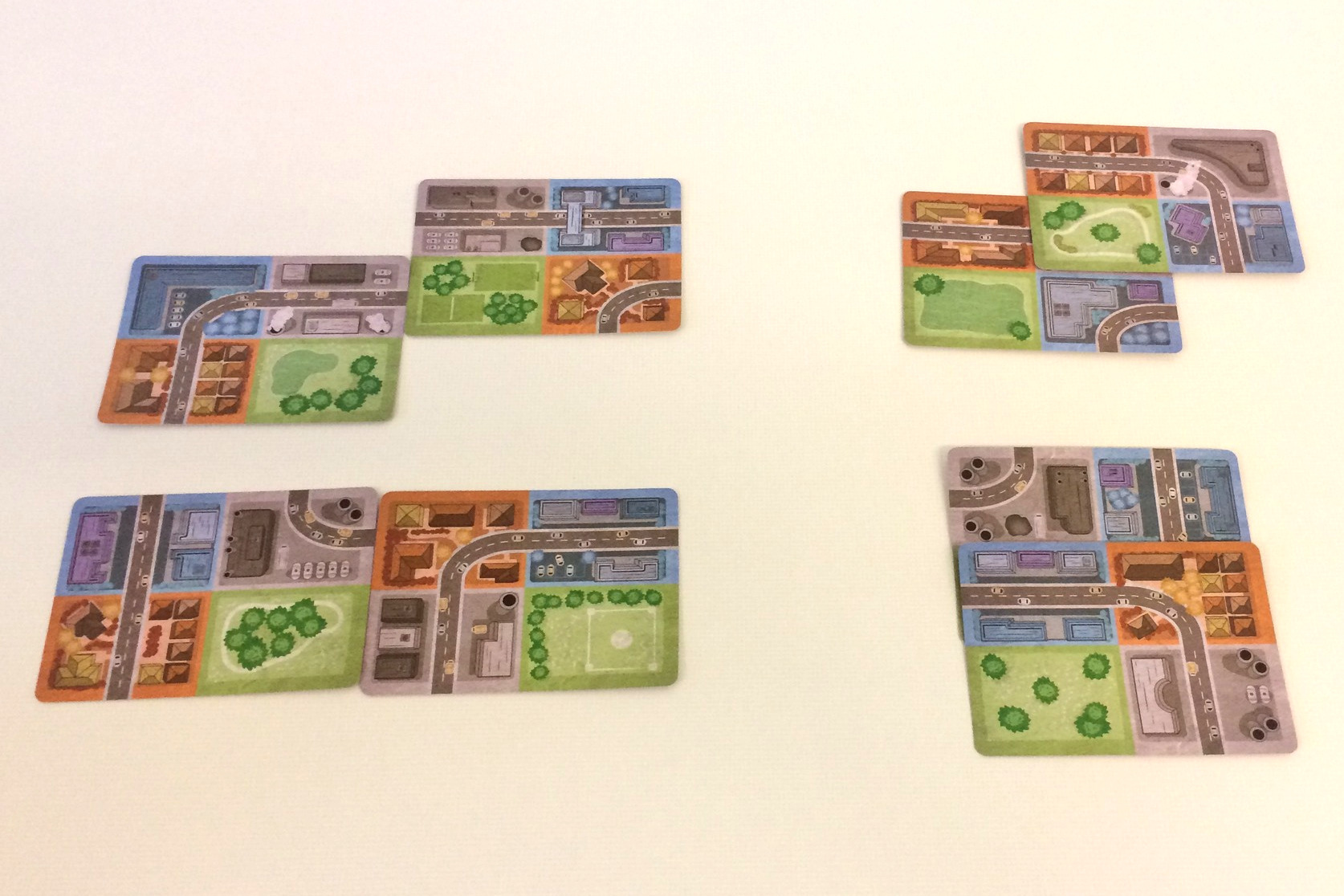 How to Score Points and Win

There are a lot of different ways to score (or lose) points in Sprawlopolis. The largest connected block of each colour scores one point per block. For example the central park below gives you 3 points, the L-shaped blue section (A commercial area) is also worth three points, the pair of orange blocks (a residential area) at the top gives two points and one of the grey industrial blocks gives 1 more point. This gives us nine points so far.

Next comes the road tax. This means you lose 1 point for each road. If you can join all your road sections together to form a few small roads you can keep this tax to a minimum. Unfortunately in the example above there are seven different roads so we lose seven points to road tax. Because every card has one or two roads on it, road tax can quickly spiral out of control if you don’t pay attention to connecting your roads together to reduce the tax.

Last but not least there are your three objective cards. These all work very differently, but each one explains quite clearly how you can score extra points. But be warned, some of them can also give you negative points.

Be warned, this small game packs a big punch. Sprawlopolis is a hard game. Don’t be surprised if it takes you a while to get your first win. I certainly struggled at first. Including the largest blocks of each type, the road tax and three scoring conditions you have seven different objectives to balance against each other. This can be a very tricky balancing act. Focusing on only a few objectives can spell defeat so you have a lot of moving parts to keep track of. The road tax in particular is challenging because every card risks adding one or two roads to your city and once you have a lot of roads it can be get your road tax back down again. You can cover up roads or join them together to cut your road tax, but can you do it while managing your other objectives?

Some of the scoring cards are inevitably easier than others. This means the difficulty will vary every time you play. Also your three scoring conditions are not guaranteed to always work together. Sometimes they directly compete against each other which can feel very unfair. Every possible combination is beatable, but some are definitely easier than others. If you think this inconsistent difficulty would frustrate you, Sprawlopolis might not be the game for you. The good news is that each game is very quick, so if you find a scenario you can’t beat you can easily try again or just shuffle up a new scenario.

Sprawlopolis is incredibly replayable, especially considering it’s made up of just 18 cards. The scoring conditions are all diverse and force you to play in different ways. I love playing with a different combination of scoring conditions every game. In fact there are 816 different possible scenarios for the game so you are always faced with a new challenge. This is perhaps Sprawlopolis’s biggest strength. Every time you play is different from the last so if you enjoy this type of puzzle, you can get countless hours out of trying to improve and get better at the game. It isn’t part of the official rules but you can quite naturally play to beat your high-score. Some scoring conditions will give points more freely than others, but I think a lot of people will find trying to beat their personal best another great reason to keep playing again and again.

This game is getting harder and harder to find in the UK now, but it’s available for only a few dollars as a print and play game. As the game only requires 18 cards, this is a pretty easy game to make for yourself. Even better, the expansions are also available as print and play options so you get more options at a great price if you go down this route. I’m not going to make availability be a factor in my final verdict, but I do think was worth mentioning in my review.

There is one more issue I must cover. Sprawlopolis can be played as a multiplayer co-operative experience but at heart I think this is best as a single-player game. It’s marketed as a multiplayer game with a solo option, but its shared experience just consists of players taking turns to choose which card to play. This game has no mechanics to stop a single player dominating the decision process which is a common problem for co-operative games. If you and your friends are of equal skill level, it could be fun to play together. In general though, I wouldn’t recommend Sprawlopolis if you are only looking for a co-operative experience. If however, you’re happy to play games alone and see multi-player as a fun optional mode, Sprawlopolis definitely gets my recommendation.