Time to learn more about my art and progress I made during September and October. Read on to find out more. 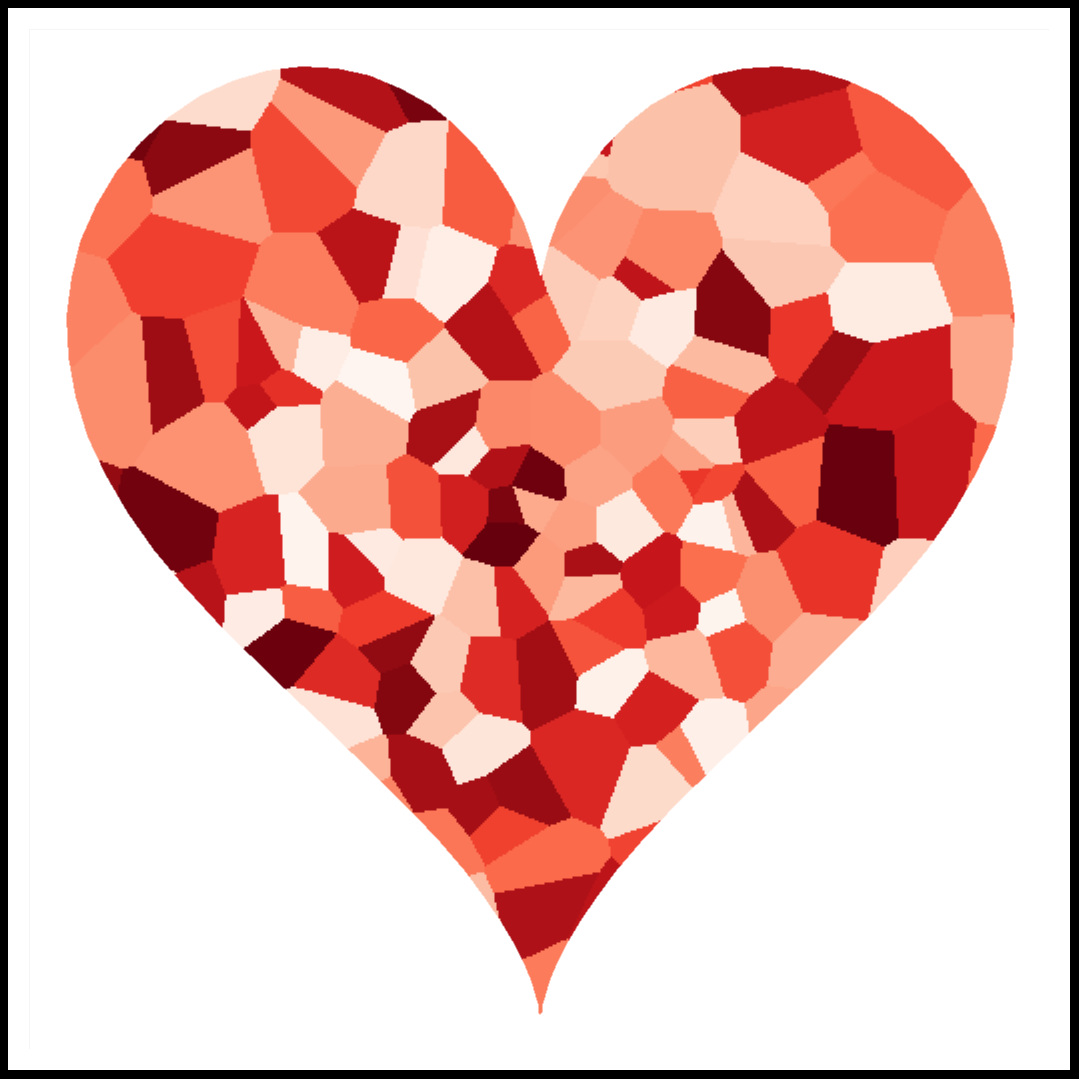 This heart looks like a fairly generic piece of art, but there are a couple of different mathematical things going on. The pattern comes from the mathematics of Voronoi diagrams whilst the shape comes from a parametric formula. To combine them, I first created two pngs, one with a large section of the pattern, and one with a just a black heart. I then combined the two to create a complex patterned shape. Now that I can do this, I’ll be able to do more complicated pieces of art in the future. 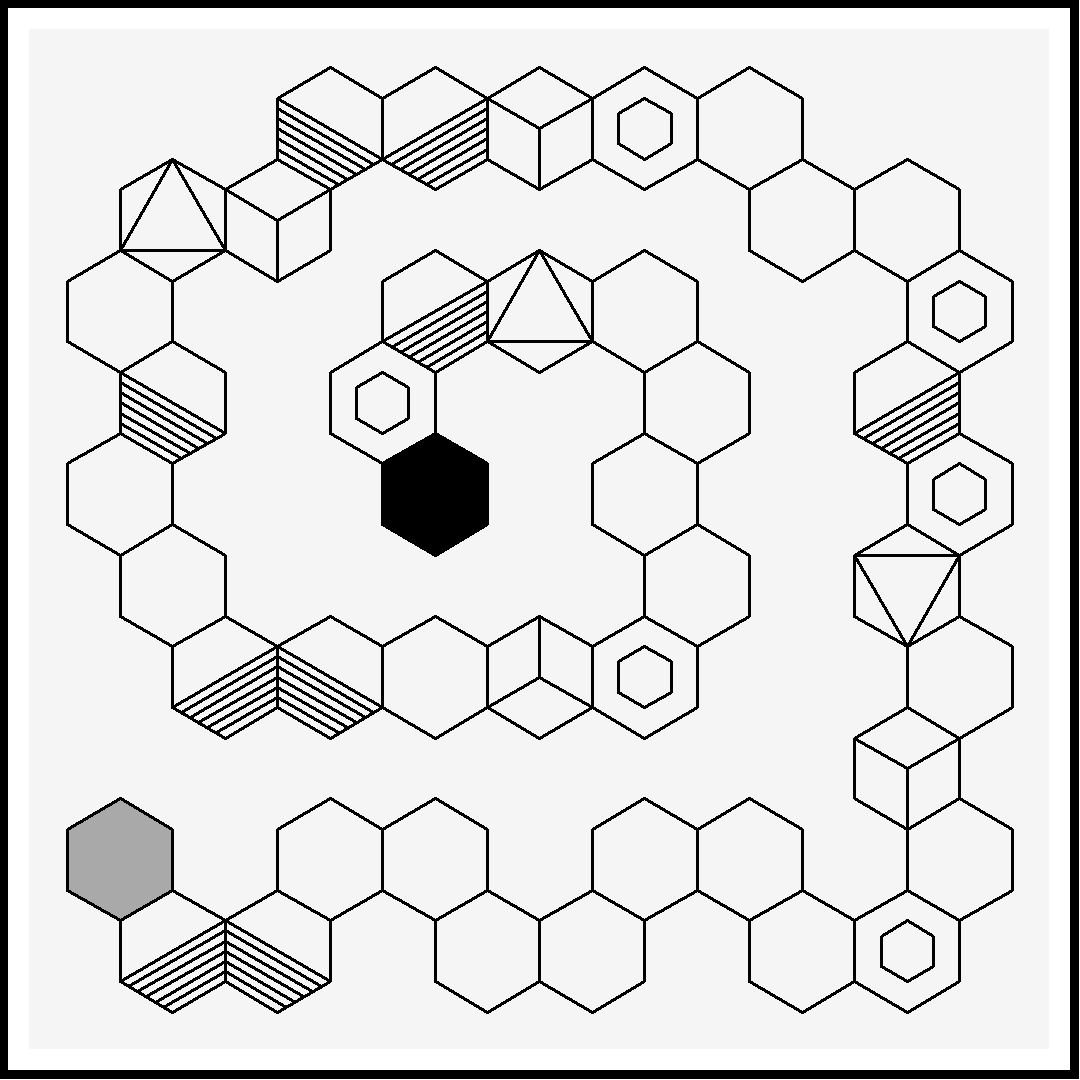 I’ve started to experiment with hexagons and one example is this design that resembles a board-game. There are no rules, which adds to the mystery. I really like black and white art, but I usually struggle to make something really striking, so I’m really proud of this piece. 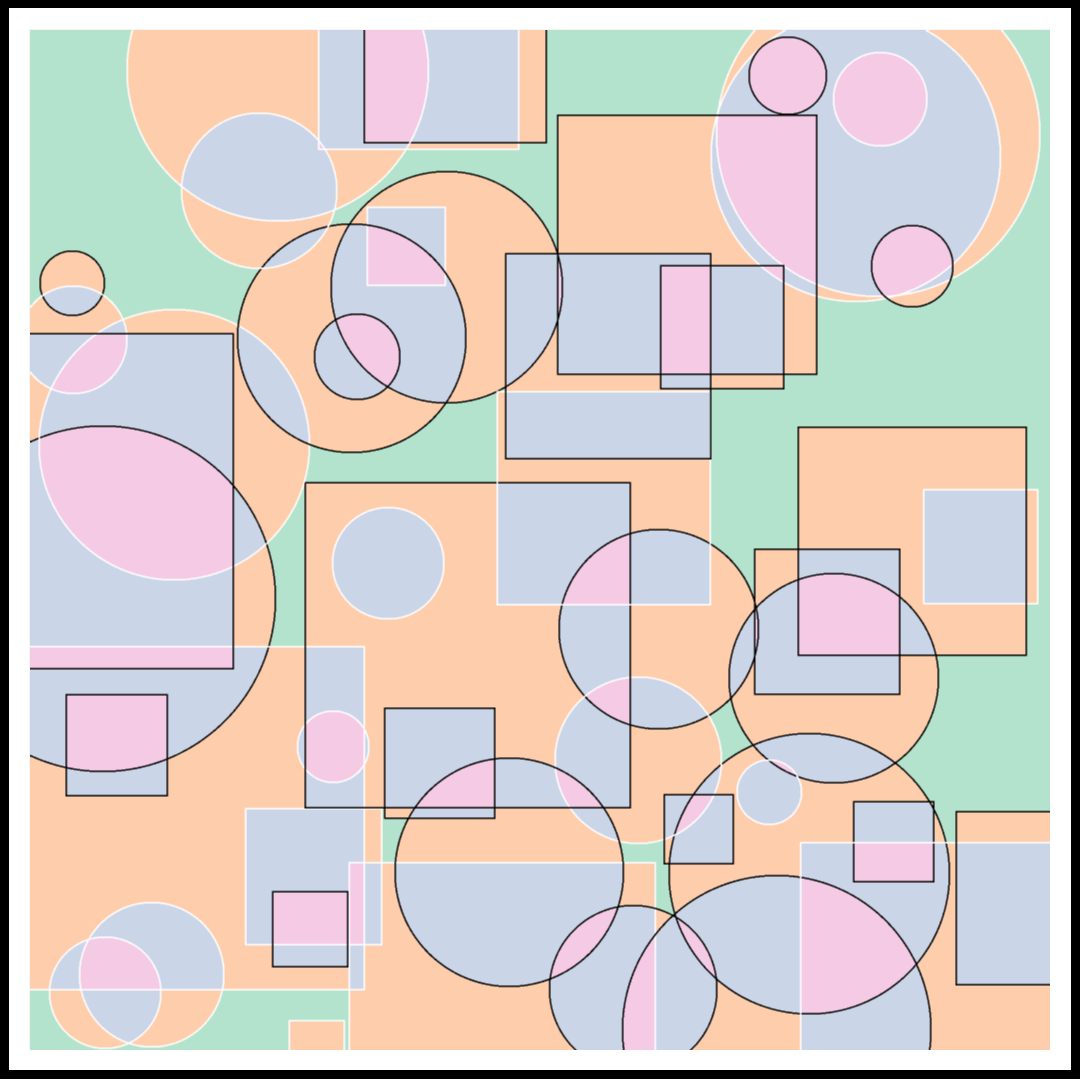 I’ve made a lot of pieces of art using circles and squares, but in this piece rather than simply telling the computer to draw a square, I used a grid of pixels and manipulated that instead. So far I can only do rectangles and circles because they have simple mathematical formulas for telling if a pixel is inside the shape. This might restrict the shapes I can use, but it lets me do art like this where the overlapping of shapes is the focus. It also lets me ensure the art isn’t too crowded. For example in this picture the pink areas represent three shapes overlapping, and no pixel is covered by four different shapes. I don’t know what I will do with this technique in the future, but I’m sure it has real potential. 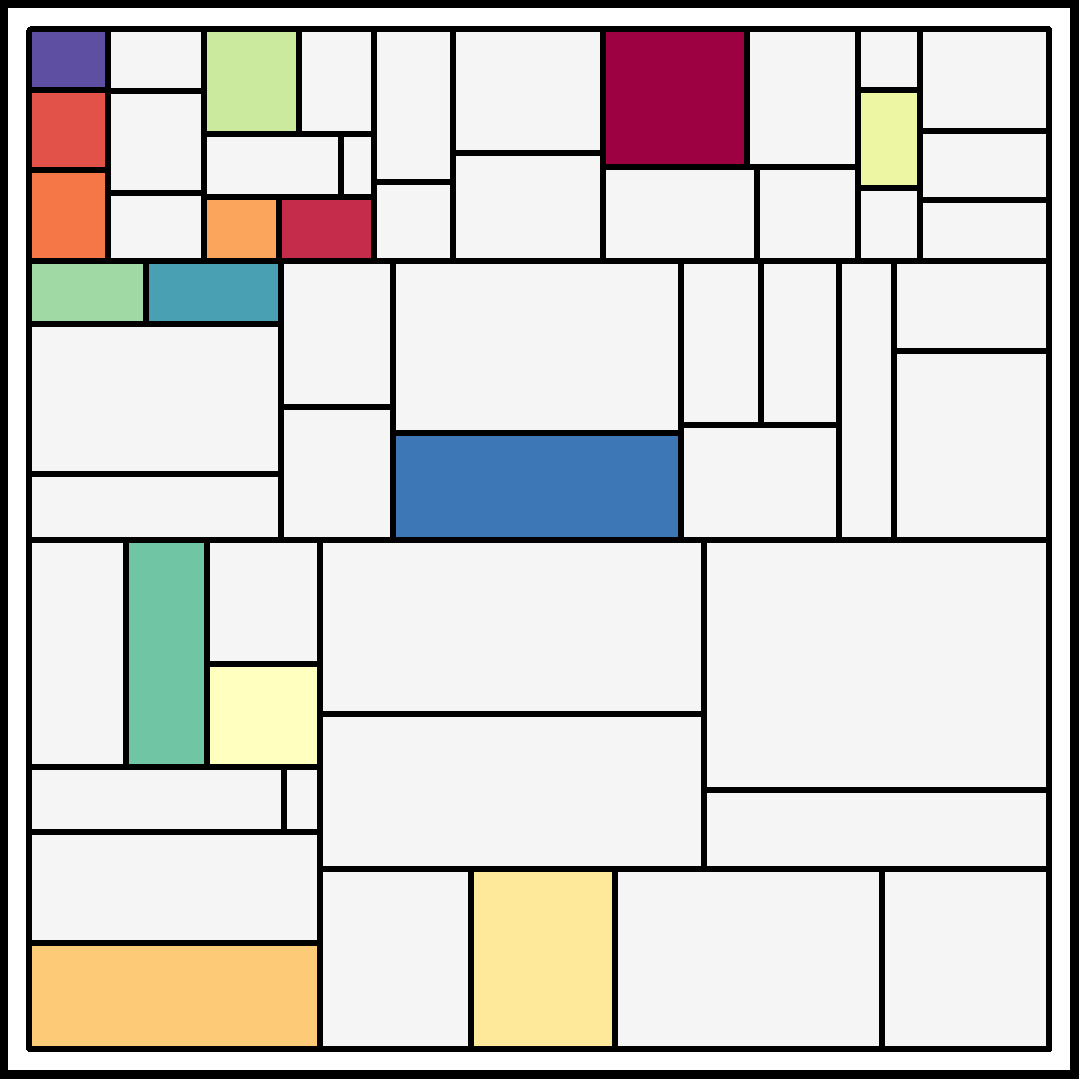 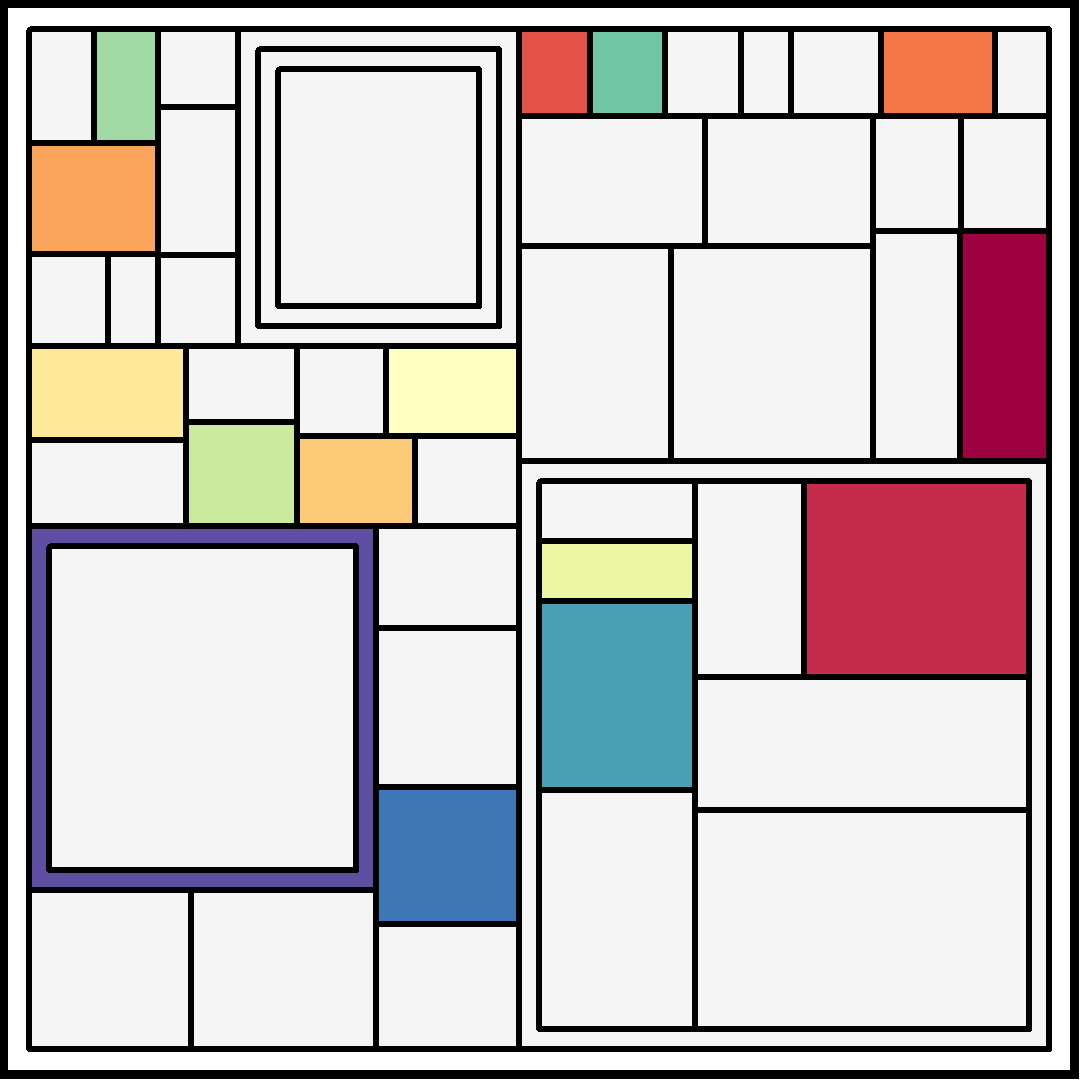 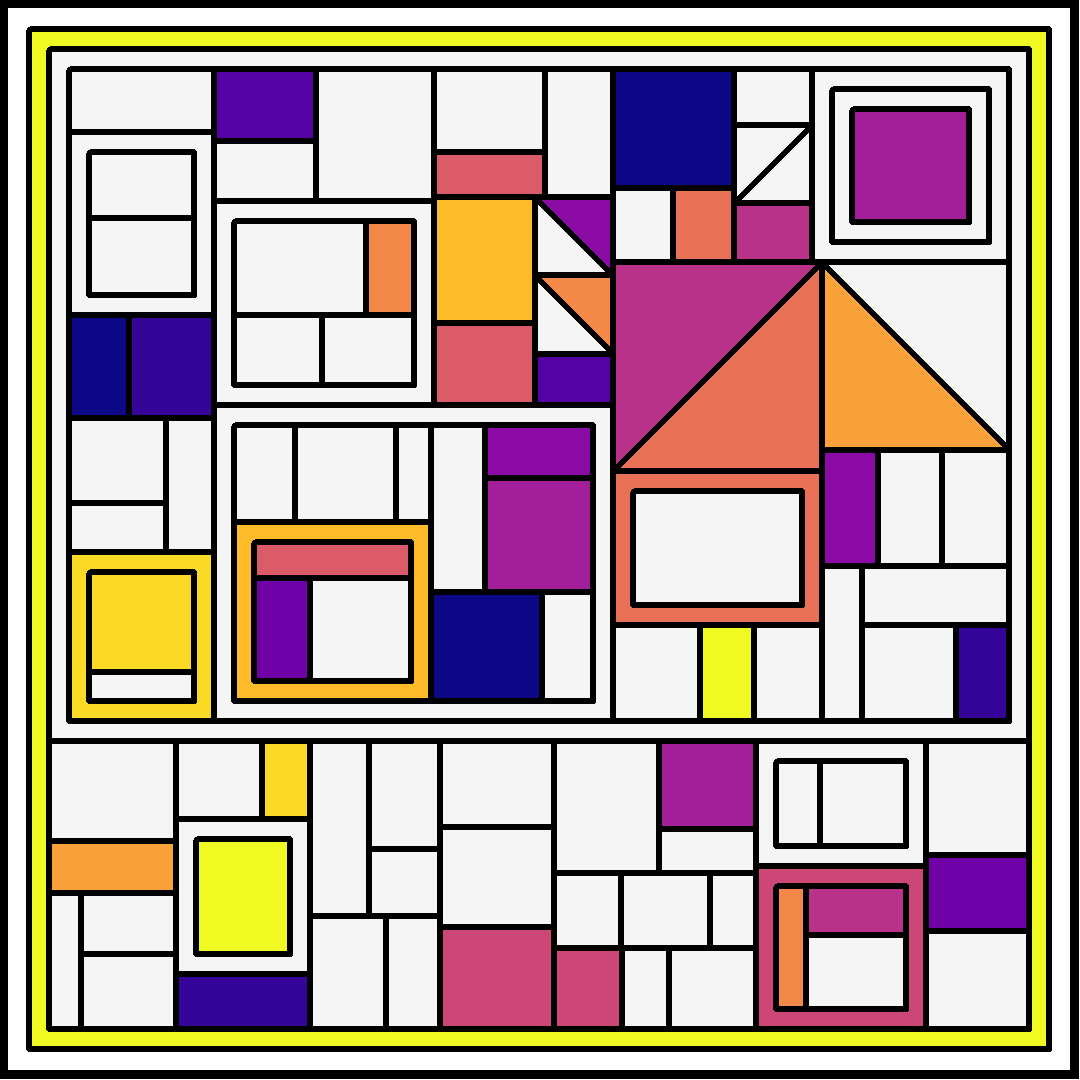 A lot of my art would technically qualify as procedurally generated, but this is a piece that really feels like it was created by something more intelligent than a rather simple algorithm. Each one starts with a square that is broken up into parts. This process is iterated on each piece to create the final mosaic. You can see here the three different pieces I have made. Each time I add a new possible way for a rectangle to break up, which makes for intricate and interesting pieces. I look forward to seeing where this goes in the future as I add more and more options.

I have decided to convert all my code into an R package. I would love to get the package on CRAN eventually, but for now my first aim is to get the package onto github. This is going to be a lot of work, but it will help me refine the code, and work out what features I still need to add. Just like when I added animation to my code, this will be involve reviewing every line of code. A lot of my code is undocumented so I have lost track of what features I have or haven’t added. Documenting every function to the standards required for CRAN will be a big help for me personally.

Because I am going to spending a lot of time reworking my code and not focusing on new art, I’ve put my Instagram page on hiatus again. My last post was post number 99, so when I return I’ll be ready to hit the magical 100. I’ve also gathered over 50 followers, which is pretty cool. I’m also only going to publish this art diary series every two months as there will be less to cover until my package is off the ground. I still have a lot to learn for example about how to document a package and getting it to compile successfully.