For the first time since July 2020, my FPL diary series returns. I lost interest in FPL very early last season so this series has been on hiatus. Let’s see how I fared during the first two months of the new season. 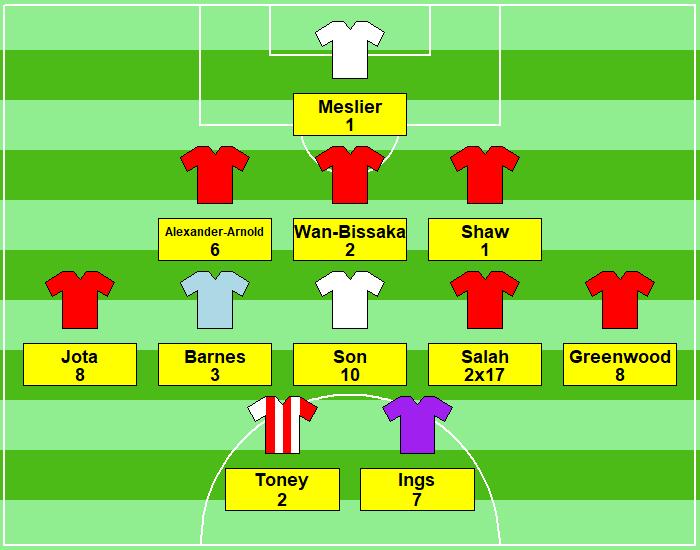 Game week one is always exciting of course, but this was the craziest start to the season I have ever seen for FPL. In my season preview article I explained how Salah and Fernandes were extremely obvious picks and I was almost certain to start with them. Before the season started I decided to gamble and spread my funds around the team and Fernandes had left my team. My logic was that I would always captain Salah over Fernandes, he had finished the season looking tired and there was no guarantee he would justify his price tag. By lunchtime on Saturday this decision was comprehensively punished. Man United thrashed Leeds 5-1 and Bruno scored a hat-trick to start the season with 20 points from one game. As a heavily owned and heavily captained player, this looked like being a dire game week.

That Man United game was fascinating from an FPL perspective. I felt Greenwood was being under-rated and he rewarded me with a goal. I also thought the Man United defence was being overlooked so I decided to invest heavily. Everyone already had Luke Shaw, so getting a second defender to capitalise on their great fixtures made sense to me. Luke Ayling scored a wonder goal to take away my clean sheets. Like many I had him on my bench to add insult to injury. Pogba also grabbed headlines by playing as an attacking midfielder on the left freed from any defensive responsibilities. He got a hat-trick of assists and if he keeps that position he could be a fantastic asset.

As you can see from my score of 82, I managed to turn it around over the course of the weekend. Ings, Son, Jota and Trent all got returns and importantly Salah almost matched Fernandes with a goal and two assists against Norwich. Another notable game was the West Ham game. West Ham scored four against Newcastle. Benrahma got a goal and an assist for eleven points, whilst Antonio was involved in everything with a goal, two assists and a missed penalty. Frustratingly, these were both players who were highly owned and in most of my drafts over the summer. Overall it’s had to know how to assess this game week. Normally 82 points is a great score but normally the average is never a sky high 69. A great many managers had Fernandes, Salah and Antonio and started the season with over 100 points. Fernandes has never scored a hat-trick for Man United before, so I think I was a little unlucky to be hurt by one decision so badly. Still, the season is decided by 38 game weeks, so you can’t judge anything by a freakish week like this one. 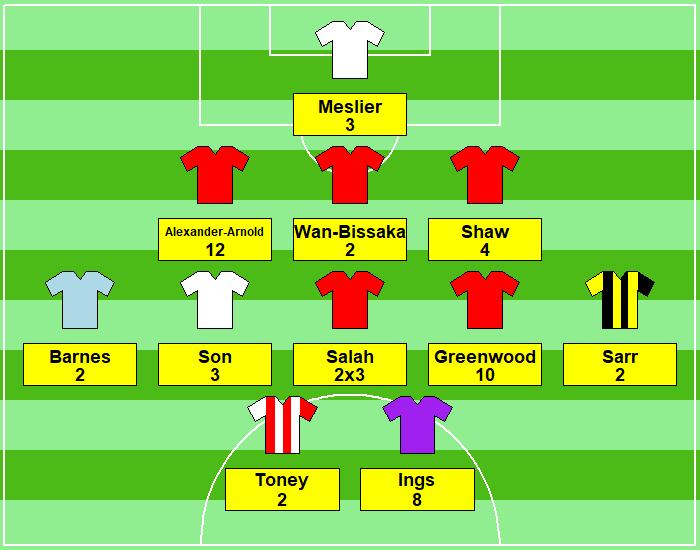 I made my first transfer of the season and it wasn’t an immediate success. I had brought in Jota and Greenwood at the beginning of the season knowing that either player might only get a few weeks in the first eleven. Jota returned nicely in week one, but only got 60 minutes. With Firmino coming back sooner than I predicted I was worried about keeping him. I shouldn’t have worried as Jota got more minutes not less and repeated his 8 point tally from last week. I brought in Sarr who was really impressive against Aston Villa last week. I expect he will be a better pick than Jota long term, but Sarr blanked this week so I would have been six points better off if I had been more patient.

West Ham continued to impress with a 4-1 victory over Leicester. Benhrama again got 12 points and Antonio got 16 points. I considered both players, but I didn’t fancy the Leicester fixture. If I had kept Jota and brought in one of these two I would have had a much better week. That West Ham game was probably the most important one from an FPL perspective. Lukaku got a goal on his return debut against Arsenal whilst Man City put five past Norwich. The goals, assists and points were spread across the whole Man City squad so there wasn’t any particular player who was essential to have in that game.

My own team was pretty underwhelming this week. I was expecting clean sheets for my Manchester United players and goals for Salah, but I got neither. In the end three players carried my team and since they were all popular picks I didn’t get a very good rank. I still beat 50 points though, which is the benchmark target for an OK game week. 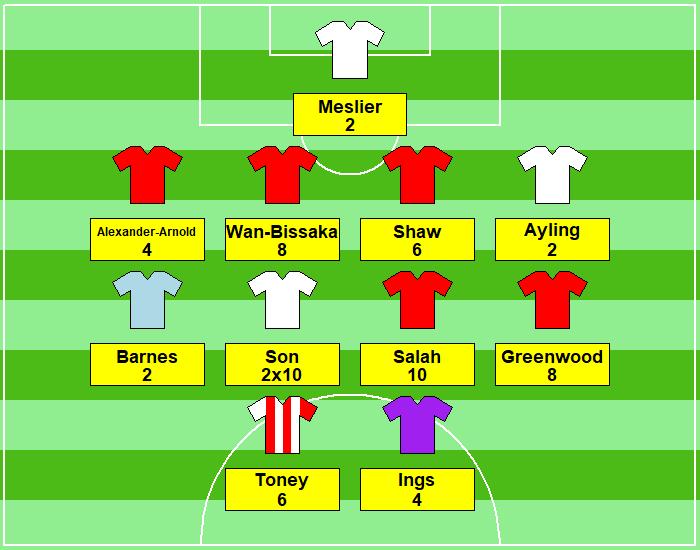 I will remember game week one for a long time, but a successful season is built on weeks like this one. None of my players were spectacular, but seven players got a goal, an assist or a clean sheet. TAA even got two bonus points despite getting no other returns. It wasn’t a very memorable game week but it was fantastic for my rank. This early in the season it’s very easy to race up the league so I climbed over a million places on the back of this game week. I was helped by Fernandes getting only two points as he was a very popular captain this week. The orthodoxy going into the season was that Salah was a great captain except for game week 3 against Chelsea. In the end Salah got ten points so the idea of multiple captains being essential wasn’t true.

The season is still taking shape. I like to be in the top million at this point in the season, but I’m not that far off. I think in a normal season, 208 points is a great return from three game weeks, but we have had such a high scoring start to the season that I have to be patient and hopefully I will climb my way up the league. 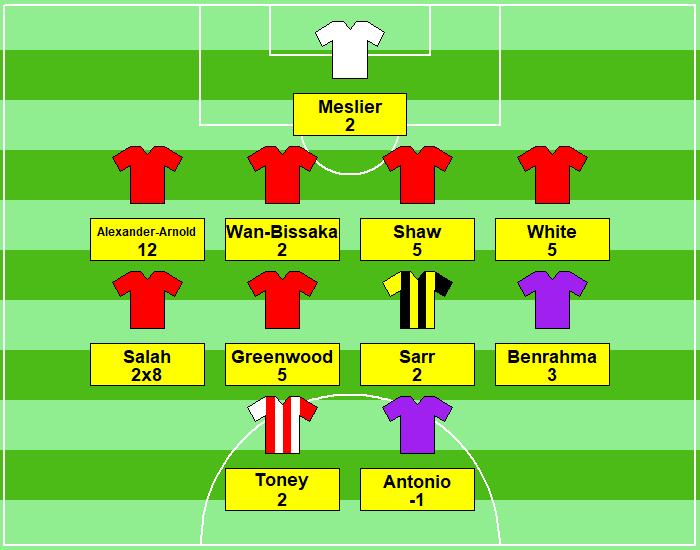 There is no escaping it, this week was all about Cristiano Ronaldo and his return to Manchester United. Lots of managers brought him in and captained him for his second debut at home to Manchester United. I would have needed to wildcard to bring him in, and I decided to save it for the big fixture swings in game week seven. I wasn’t even sure if he would be ready to play against Newcastle. Those who brought him in were swiftly rewarded with two goals and 13 point. I got two assists from my Manchester United players but one goal from Newcastle ruined all my clean sheet points in that match.

Lukaku also got two goals and an assist versus Aston Villa. I expect many people played their wildcards to bring both Lukaku and Ronaldo in which explains how the average score reached 57 points. My transfers however weren’t as smooth as the wildcarders. Instead I brought in Antonio and Benrahma. After getting triple digit returns three weeks in a row, as soon as I bought Antonio he got sent off, and Benrahma also blanked. The bulk of my points instead came from Liverpool’s 3-0 win over Leeds. Unfortunately all my scoring players have very high ownership, so even though 53 points is respectable, my game week rank was awful. 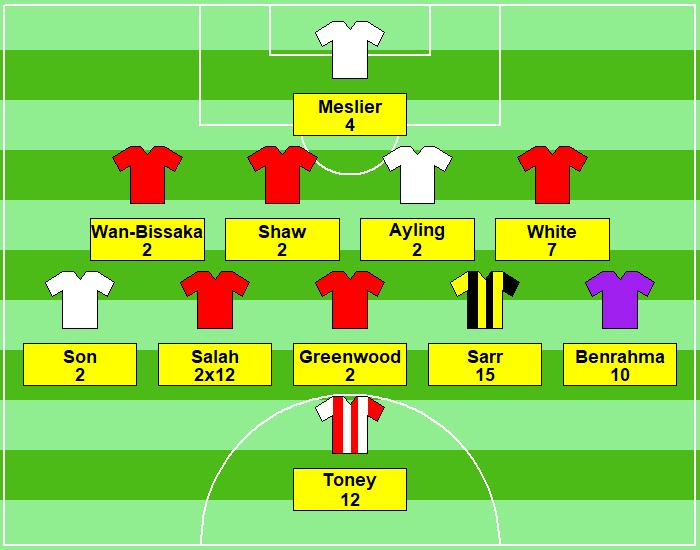 This week was much much better. I matched my score from the first week of the season, but most managers had ordinary scores this week instead of extra-ordinary ones so my game week rank was much higher. Going into the weekend I had been worrying about being able to field a full eleven. TAA was rested, Antonio was suspended and I was worried about a few other players. I did manage to play eleven players, but only five players got any returns. That sounds like a recipe for an average game week, but those who got returns were very effective at hoovering up bonus points. This meant I managed to have four players with double digit returns. In particular my faith in Sarr was rewarded with a cracking 15 points. With so many players blanking, it didn’t feel like a great game week but it propelled me well into the top million managers for the first time this season. 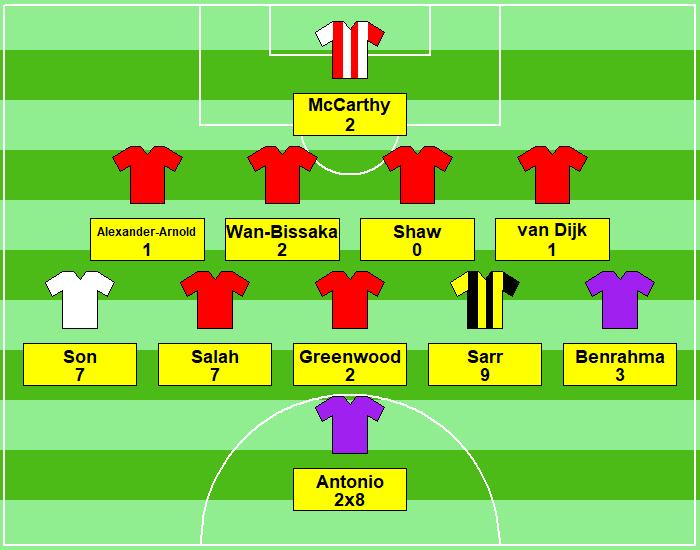 This was a strange game week. I got my worst score of the season, but I still managed a green arrow. In fact this was the first week this season where the average scores didn’t feel higher than normal. As I was planning on playing my wild card next week I had two free transfers to play with. Leeds had yet to keep a clean sheet this season and were suffering with injuries so it made sense to take out Meslier and Ayling. Unfortunately both my replacements blanked. Van Dijk is a fun pick for one-off weeks like this as he is a real threat from corners. Unfortunately this was the week Liverpool conceded three goals in an amazing 3-3 draw with Brentford, so bringing in another Liverpool defender was a mistake. Southampton managed a clean sheet against Man City the week before so I gambled on McCarthy in goal. He was playing Wolves who have struggled for goals but this gamble didn’t pay off. If I had gambled on Sá instead I would have had a clean-sheet, an assist and 14 points. Unfortunately goalkeepers are a real lottery and you can never predict things like that.

It was a low scoring week all round. Vardy was the only player to get a brace and even that was tempered by him getting an own goal too. None of my players could reach double digits this time. Luke Shaw also got booked and injured for zero points while I benched Toney who got an assist against Liverpool. Despite all these frustrating issues, I still managed to hit the magic number of 50 points. If I can keep hitting 50 points as a minimum, my rank will continue to rise.

Looking back at my season like this really helps you see how important or consistent players have been. I chose Greenwood over Fernandes and got punished heavily by Fernandes’s hat-trick in the first game week, but by game week six, Greenwood has actually outscored Fernandes. I regretted my Jota to Sarr transfer in game week two, but since then Sarr outscored Jota comfortably in the next four weeks. My double up on the Manchester United defence has been a failure. They have only conceded five goals, but because they all came in different games, I only got clean sheet points from them in game week three. I was also excited by players like Barnes and Meslier and both failed to bring me any returns at all.

In general this has been a fairly average start to the season for me. My rank is neither that good or that bad. I’ve had no game-week that scored below 50 points, but my overall rank isn’t as spectacular as I would expect for that consistency. That suggests this will be a very difficult season. There is definitely room for my team to improve. I’ve yet to get a clean-sheet from my goalkeeper for example. Importantly I’m playing my wildcard for game week seven, which could be a real turning point in my season. My wildcard teams last season were awful, so hopefully I can avoid that fate this season. Join me in two months time to see how my wildcard goes.