Seven game weeks to digest, a big gamble and some extreme scores… but are they high or low? 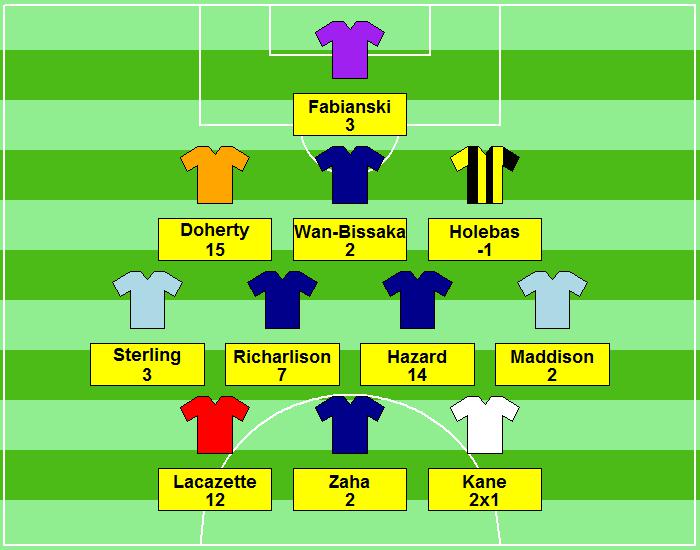 This was the week of the great Kane gamble. Aguero was consistently picking up points however he was also getting reduced game time to manage an injury. Having had all my transfers in September go so well, I decided to bring in Kane for a few weeks. He had a beautiful fixture against Cardiff lined up and I felt like gambling on a Kane hat-trick. Spurs’s fixtures fixtures quickly take a nose dive after this, so it could only be a short term punt. I don’t normally do this, but I was feeling optimistic about my transfer prowess. What surprised me was how popular this move would be, with lots of other managers also making the switch.

In the end Aguero and Kane both got booked and did nothing, so this huge move that split the FPL community had very little impact. Writing this a month later, Aguero is still to miss a single game this season which surprises me. I had expected him to be rotated a little more. Fortunately the rest of my team fired, to give me a very healthy score. I always say that 60 points is the target you aim for, and to get there with out your captain is encouraging. Special mention goes to Matt Doherty of Wolves for a goal and a clean sheet, taking home a cool fifteen points. 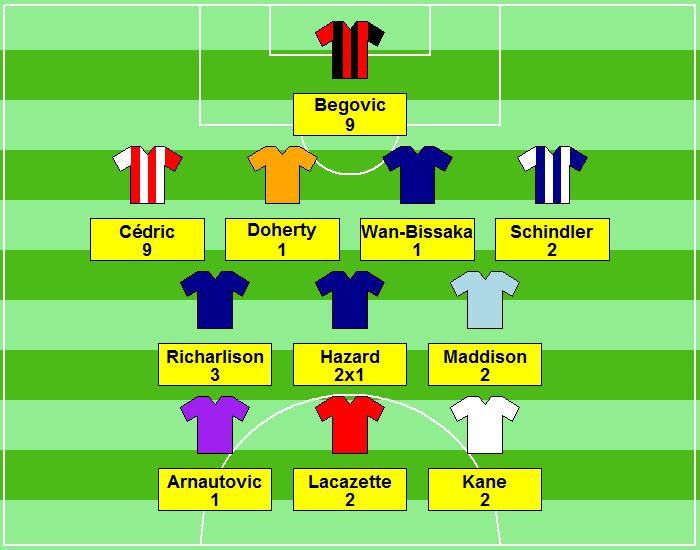 This was a terrible week for me, but it was just as bad for the majority of active FPL managers. Any week where the average score for managers in the top 10,000 is lower than the overall average is an unusual week. If there is such a thing as a good week to have a bad week, this is it. Scores were low all around. No heavily owned player exploded, although with Salah and Aguero both scoring, it seems strange that the averages are so low.

I was quite surprised to have three players not playing, meaning my whole bench was required. On top of that nine players blanked. The only players to not blank were my goalie and a defender in a 0-0 draw between Southampton and Bournemouth. Including saves and bonus points Begovic and Cedric provided just over half my points with 9 each.

A long planned transfer of Zaha to Arnautovic due to fixtures ended with Arnautovic playing through an injury and blanking. My hot streak of picking good transfers has definitely ended. 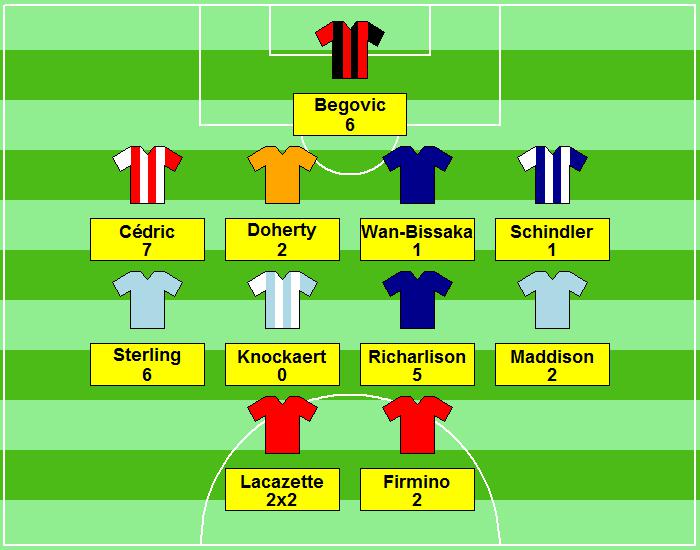 The previous week was bad. This was unbelievably bad. I cannot remember having a worse game week, and it sent my overall rank plummeting while the game week rank is painful to look at.

On the surface it seems better than last week, with two more points. In fact I had even fewer available players. I knew some wouldn’t play, but to only field 10 players is an embarrassing failure. This time four players returned, but it was a week when lots of key players scored well. The juiciest fixture of the week was Liverpool at home to Cardiff. I chose to bring in Firmino for Kane as the easiest way back into the Liverpool team. Long term I prefer Hazard and Sterling over Salah and Mane, so I chose Firmino as a easy one transfer swap. While Firmino scored 2 points Salah and Mane bagged fifteen points a piece.

Having picked the wrong Liverpool player and getting punished heavily, it’s no surprise I ended up 33 points behind the Top 10K average. Sterling and Richarlison both rewarded the faith I had shown in them with small contributions, but in the end, it was too little to salvage a shocking game week.

This was a very painful review to write. My target for October was to get up to 20,000 in the overall ranking. I crashed out of the top 200,000. My overall goal of Top 10K feels very far away. I know deep down that the season is very long, and that we haven’t reached any of the key turning points like the hectic festive schedule or double game weeks. There is a lot of ground to make up, but also a lot of time in which to do so. My target for November then was to not give up, and not to do anything rash to try and resurrect my season. Patience is a critical skill for fantasy managers. 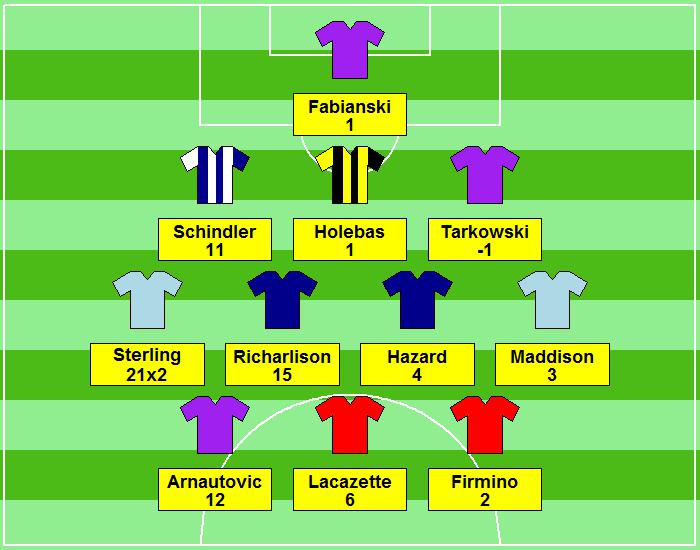 This will be remembered as the week Sterling exploded, despite being ignored by most managers, even in the top 10K. Fortunately I had him captained, giving me a fantastic 96 points. This was my second highest score of the season, my second highest game week rank, and my third highest game week rank ever. Normally a high score means your whole team is returning points, but this week it was concentrated on a handful of players. Richarlison, Stirling and Schindler all rewarded my long term faith.

Despite the positivity, there were some negatives this week. I brought in Tarkowski who rewarded me with a negative score. I would love to get rid of Knockaert because he isn’t a guaranteed starter, which is critical for a bench warmer. My defence doesn’t rotate that well, and I will need to get Wan-Bissaka back soon when Palace’s fixtures improve. 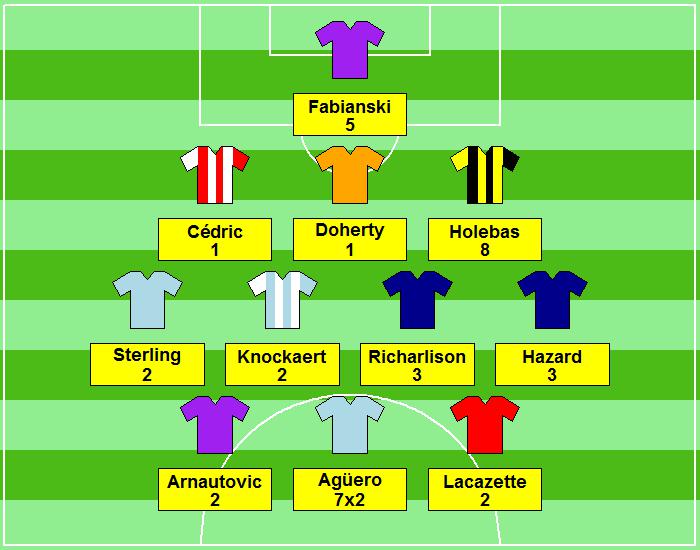 No surprise, a poor game week follows a great one. A strange game week in general with no standout players. Kane, Aguero, Salah, all scored one goal. Only Rondon got a brace this weekend. My single signing this week was Aguero, who replaced Firmino. Unlike last week, this transfer definitely paid off.

I’m just glad I got my transfer, captain and goalkeeper picks correct, as this week would have been a disaster otherwise. A lot of popular template players returned this week, making for high average scores, with popular Liverpool players scoring well. I started the season with three Liverpool players but I think there are better players in every position and price bracket, so I had slowly removed all three. A game against whipping boys Fulham could have been really bad. In the end, the score of 2-0 should have been much worse for my rank. 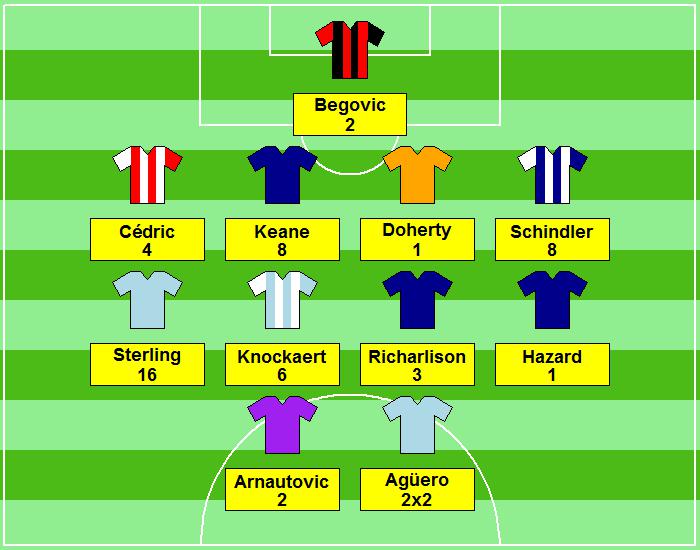 This was the third time this season that the overall average was higher than the Top 10K average, and by a large margin. A lot of famous players in the community had terrible weeks this week, so a score of 55 is very respectable, even if 60 points is my usual weekly target.

It was also a potentially great week that I missed out on. In the previous week, I captained Aguero, and it was the correct decision. This probably influenced me to not captain Stirling. This meant I missed out on 14 more points, and was yet another captain blank this season.

My new signing Keane also hit the ground running with a clean sheet and bonus points. 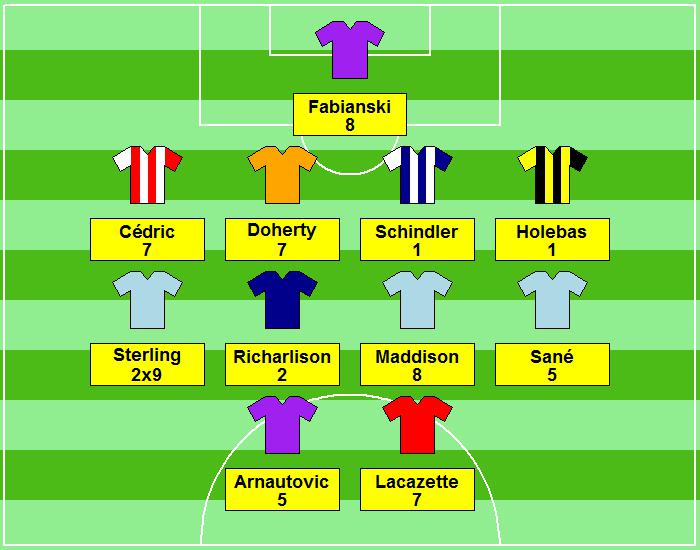 I finished November with another very good month. Captain Sterling led a large group of players who returned. No-one got a double digit haul, but most players chipped in with a goal or an assist. A very equal opportunities game week. Even two of my defenders scored this week.

My bench was a great success this week. Cedric and Maddison came on as automatic substitutes and both scored, boosting my score by 15 points. My transfer was a very minor failure. I took Hazard out after concerns about Chelsea and Hazard’s possible injury. I brought in Sane who is in fantastic form and very likely to play while Mendy is injured. If I had delayed the transfer I would have scored one more point, so it is a very minor failure.

This week will be remembered for Aguero being the most popular captain choice but getting completely rested. Unfortunately it was also the weekend of the North London derby, which went badly for Spurs, so the weekend was depressing, even if my FPL team did well. Aubameyang is now premier league top scorer, and has a shocking low ownership. It is strange to see players getting huge scores while being ignored by FPL managers. My first transfer for December is to switch Aguero for Aubameyang. I had planned to bring in Kane for his fantastic fixtures. Spurs are playing well, but Arsenal were fantastic in the Derby.

November was a great month, with three weeks above the top 10K average. I am still a long way behind, but it now feels achievable to catch up. Great things can happen over the festive period as games come thick and fast, weak benches get punished and managers neglect their teams. Will I be able to make up more ground? How many points will Santa bring me for Christmas? Find out next time!