My season started badly, and I had been really struggling. Then I wildcarded in the last week of September, my 91 point haul transformed my season. Can I continue this transformation through the autumn? Read on to find out. 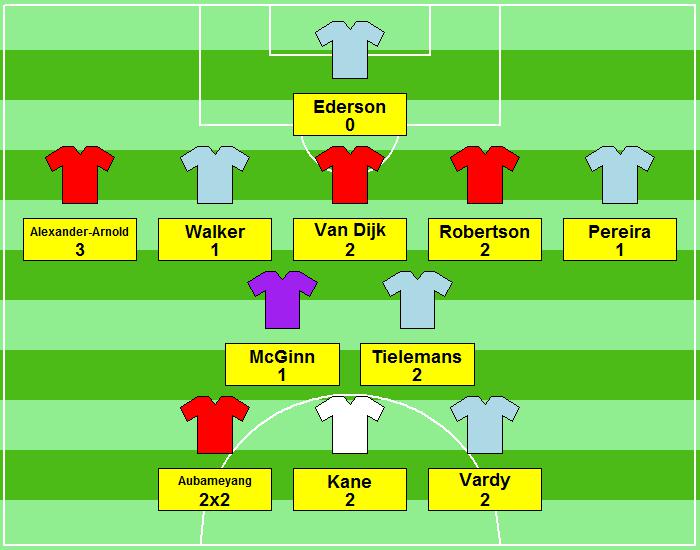 Traditionally after a great week, I have a horrible week, and the tradition was kept up. This wasn’t my worst ever score, but it was my worst ever game week rank. I wasn’t expecting a good score because all my Liverpool players played all my Leicester players, but to have all eleven players blank is awful. It was a low scoring week, so I wasn’t too far below the average, but my overall rank still tanked. Ranks are still very volatile at this stage of the season, so I still have a lot to play for.

There were plenty of interesting results this weekend. Brighton beat Spurs 3-0, Villa beat Norwich 5-1. Wolves and Newcastle beat Man City and Man United respectively. Only Chelsea bucked the trend beating Southampton 4-1. Perhaps all these shock results explain why the average score was so low. 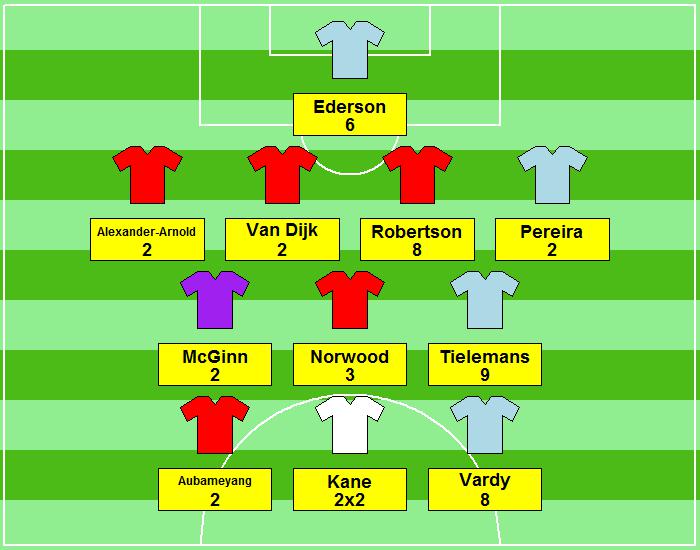 This was truly weird game week. Looking at my team, it looks average. My captain blanked, six other players blanked, and no-one hit a double digit score. Yet I ended up with a great game week rank. I don’t understand how. Two goals, one assist and one clean sheet isn’t a recipe for a high rank, but somehow it worked this week.

Only a few teams kept clean sheets this week, and no team scored more than two goals. Many big name players blanked leaving good looking squads with rather low scores. I can’t explain my success this week, but I’ll take it. 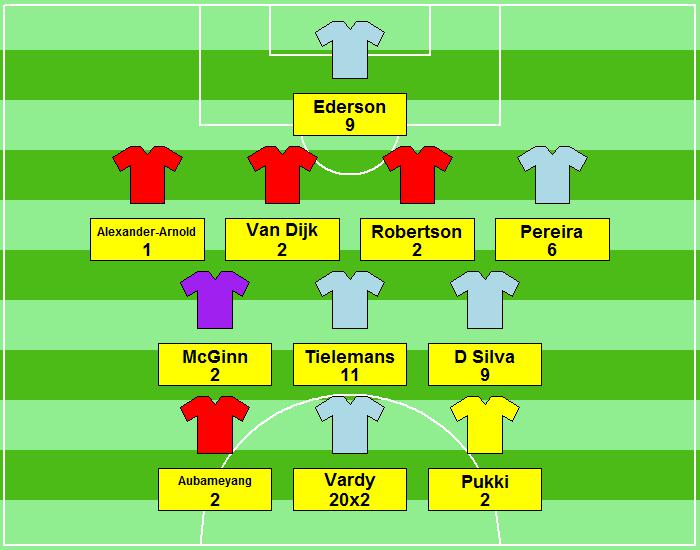 There were goals galore this week, but only one game mattered. Leicester beat Southampton 9-0! When you have tripled up on Leicester players, and captained Vardy, this was the game you dream of. It took place on Friday night, so I woke up on Saturday morning with an unbelievable 56 points after one game! I didn’t manage to beat my points or rank from game week seven, but listening to this game unfold on the radio was one of my favourite FPL experiences. At 4-0 Vardy had done nothing, and I was heading towards an embarrassing captain blank in the middle of a goal blitz. Vardy left it late to score a hat-trick and an assist. What makes it crazier is that I didn’t even have all the best Leicester players this week. Perez scored 20 points and Chilwell scored 19.

As I said, lots of goals went in this week end, so other managers could slightly catch up with me. Very popular players like Sterling, Kane and Salah all got a single goal to raise the average above the low scores in the previous two weeks. Pulisic also got a hat-trick this week, adding another Chelsea player to my watch list.

I made two transfers this week. I really wanted David Silva in my team, so I had to shift funds into midfield. This was moderately successful. Kane had some awkward fixtures, so I sold him and took a big risk to bring in Timmu Pukki. I chose Pukki based on a gut feeling, and it didn’t pay off. Pukki blanked and Kane scored against Liverpool. Fortunately David Silva scored against Villa to get 9 points.

I had a fantastic rank increase this month, but realistically, it was all down to one unforgettable match in another wise forgettable month. October started with a dramatic game week drop, but Vardy and co rescued me to deliver my highest overall rank of the season. 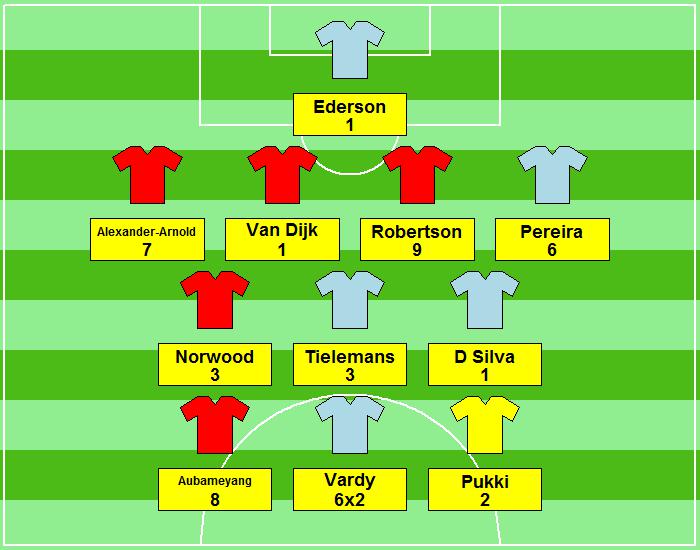 This week saw me finish bang average with 53 points. My score was fine, but I was hurt by one player in particular. Player of the season, John Lundstram scored two goals while keeping a clean sheet to get a phenomenal 21 points. In my game week six review, I said the week revolved around Lundstram and he only scored 12 points. Without Lundstram in my team, finishing with an average rank is actually quite an achievement.

What really stings is my transfer for the week. Kyle Walker had scored one point in three weeks so I swapped him for his replacement Cancelo. Guardiola then hit me with his infamous rotation roulette and played Walker. Walker doesn’t get attacking returns very often, but the week I transfer him out he gets a goal, an assist and 14 points! If I hadn’t made this mistake, my game week would have been much better. 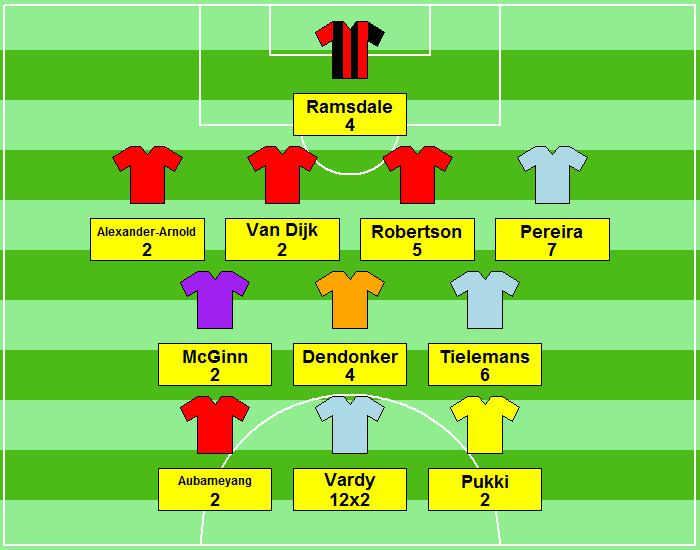 This was a solid but unexciting week. Vardy continued his great form, Pukki continued his terrible form and none of my three Manchester City players played. Vardy really carried my team this week, with a goal, an assist and three bonus points. Only three other players got returns this week, so I’m surprised that I managed to finish ten points above the average. There were in fact few standout players this week. Only three players managed more than one goal or assist and no-one got a brace.

My transfer this week was forced by an injury to Ederson. With the heavy rotation over Christmas, I decided to upgrade my substitute keeper. Ramsdale came in an delivered a healthy four points. 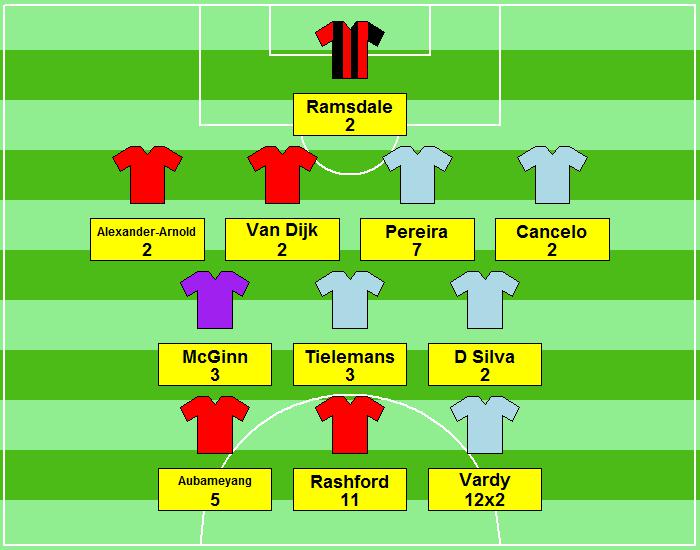 I captained Vardy for a fourth week in a row, and for a fourth time in a row I got rewarded. Again Vardy scored 12 points, with the referee forcing him to retake a penalty he missed due to another player encroaching. With the captain’s armband this represented a massive swing in points for me. Despite my good game week rank I still got my third red arrow in a row, even if it was a very small drop. The higher you go in the league, the harder it is to even tread water. I did make a mistake that probably cost me a green arrow. Robertson was injured, and so I benched him. In the end he played and got an assist, so I missed out on an extra four points.

Most of my team blanked, so once again Vardy is single-handedly saving my blushes. I made two transfers this week. I decided I was desperate to get rid of Pukki, so I took a hit to enable me to upgrade him to Rashford. Pukki actually managed to get an assist this week, but Rashford scored 11 points to be my second highest scoring player this week. To fund the transfer I had to downgrade a premium defensive option. Since my defenders had good fixtures coming up, I decided to drop Ederson and take a gamble on Gazzaniga offering a very cheap route into Tottenham’s defence whilst Lloris is injured. Gazzaniga and Ramsdale should rotate nicely over the busy winter schedule.

The big story of the week was Mourinho taking over at Tottenham. Spurs look regenerated with their attackers looking like exciting options. I’m hoping the defence will also be rejuvenated by Mourinho who has traditionally favoured pragmatic defensive play. For the second week in a row Tarkowski was the highest scoring player in the game with 29 points in two weeks. 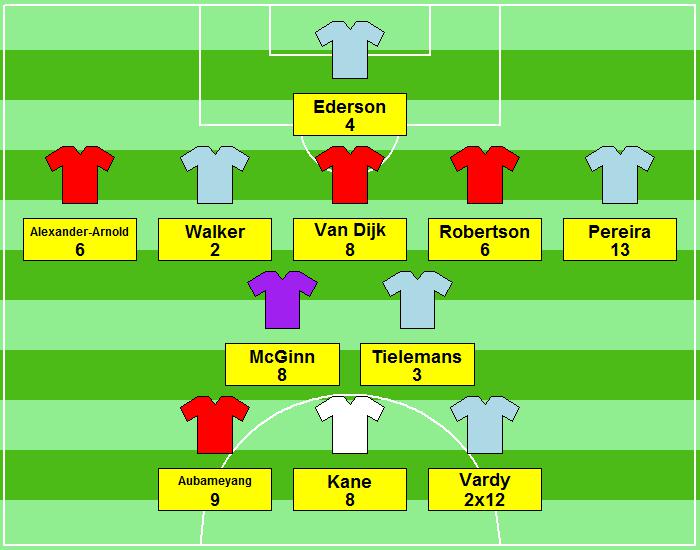 I finished November with a return to the land of green arrows. Vardy did the business again for me this week, although his ownership is now getting very high, so the benefit isn’t as big as it once was. My Liverpool defence was great this week with two nearly identical goals. An Alexander-Arnold cross was headed in by Van Dijk, which is fantastic for me.

Once again Liverpool conceded one goal, robbing me of twelve points. For eighty minutes I was heading towards an awesome score until Allison committed a stupid hand-ball outside the area. Somehow Liverpool have conceded the second fewest goals this season, are eight points clear at the top of the table but have only kept two clean sheets. Liverpool have excellent fixtures coming up, so hopefully I can shoot up the rankings when their

My transfer this week backfired, which is not surprising given my recent transfer history and the fixtures. Arsenal were terrible in the league and in Europe, so I decided I couldn’t trust Aubameyang to score, even against Norwich. Arsenal’s away form in particular has been terrible for a long time. Hours after I made the transfer, Emery was sacked, the gloom over Arsenal lifted and Aubameyang scored a brace and 13 points. My replacement Jesus blanked against Newcastle. He’s an interesting pick for once since Aguero is injured for a few weeks, meaning Jesus is almost guaranteed starts during a period when games come thick and fast.

To add to the frustration a lot of other players I considered bringing in returned. Zaha scored 11 points whilst James Ward-Prowse, Grealish and Cantwell all scored. I would have been much better off upgrading my midfield than making a sideways move upfront. Despite all this frustration, any week with a green arrow is a good week. Getting no green arrows this month would have been very depressing.

Consistency was the theme of November. With a minimum of 53 points every week, and a maximum of 66, I’ve never had a month of FPL where my scores were this uniform. Another consistent theme are poor decisions costing me points. I was always close to a great score, but coming up short. All this means is that my rank took a small drop over the month, but I’m ready for the hectic Christmas schedule when anything could happen.