Review: Link’s Awakening for the Switch

I love the Zelda franchise, but if I had to pick my favourite Zelda game, I would choose Link’s Awakening for the Game Boy. So imagine my surprise and joy when I found out it was being remade for the Switch. So does it live up to the original? Read on to find out. 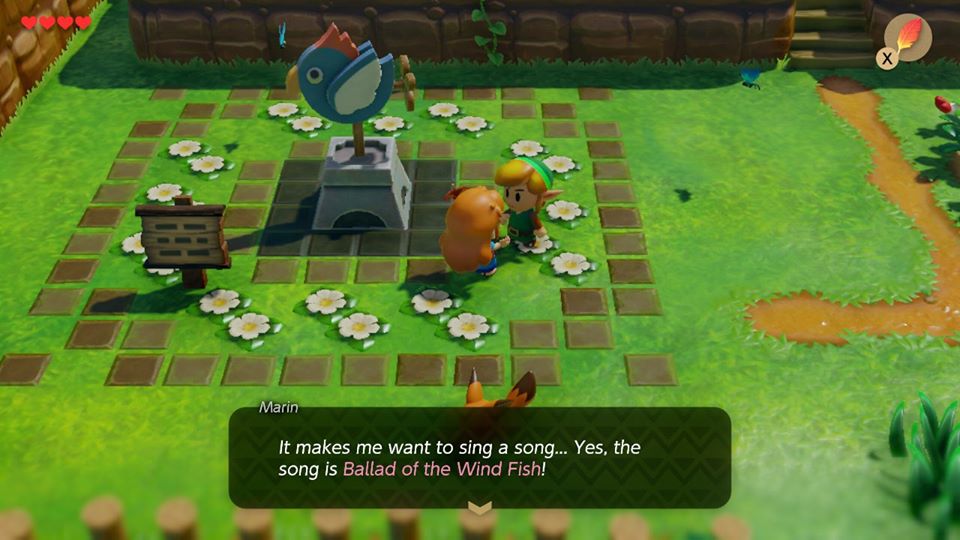 What made the the Original so great?

Link’s Awakening begins with Link waking up, having washed up on the strange island of Koholint Island. Like Majora’s Mask, this is one of the few Zelda games not to take place in Hyrule. The Zelda franchise was much smaller back in 1993, but Zelda conventions were still well established. Link’s Awakening, like Majora’s Mask that is able to forget the traditional places and people of a Zelda game and forge its own path. References and homages to Mario and other Nintendo franchises are frequent and some characters even break the fourth wall. Given how much Zelda games tend to follow the traditional formula, I love Link’s Awakening for pushing the boundaries of a Zelda game.

Taking inspiration from Twin Peaks, Koholint Island is a strange place. The only way to leave is wake the Wind Fish, a mysterious being sleeping in a egg on top of a mountain. During your quest you learn that Koholint Island may just be part of the Wind Fish’s dreams. If you wake it will Koholint and all it’s lovely people cease to exist? Unlike every other Zelda game, it’s not actually clear if you are the hero or not. This philosophical dilemma is one of my favourite plot twists in a video game. 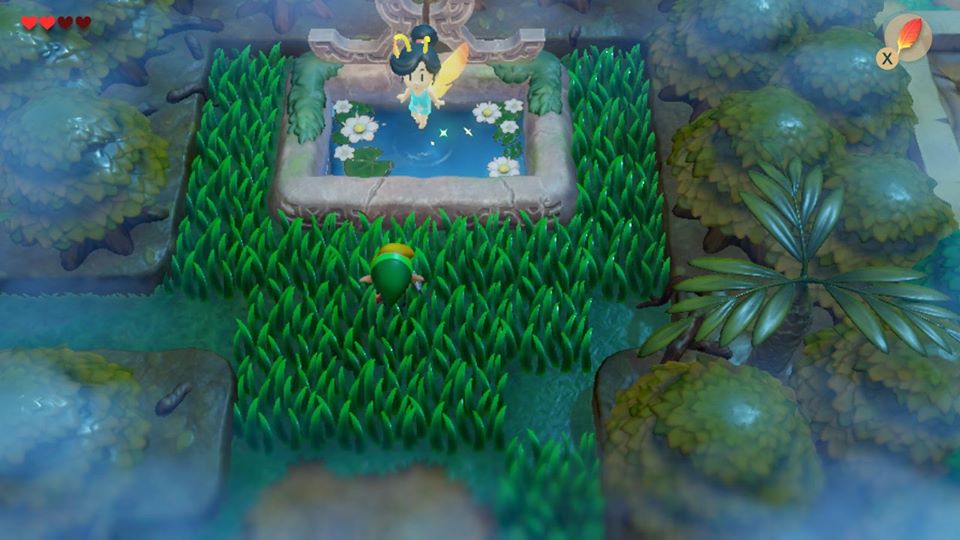 Another part of my love for Link’s Awakening comes from my love and nostalgia for the conventions of the oldest Zelda games. It’s interesting to compare Link’s Awakening with Breath of the Wild. The open world nature of Breath of the Wild is fantastic and I loved the freedom it offered, but the enemies and combat got very repetitive. In Link’s Awakening many enemies only appear in one place, which is not true of many newer Zelda games. I also like the difficulties that came with older games. There are far fewer hints and the maps are much less detailed, which is another challenge I enjoy. 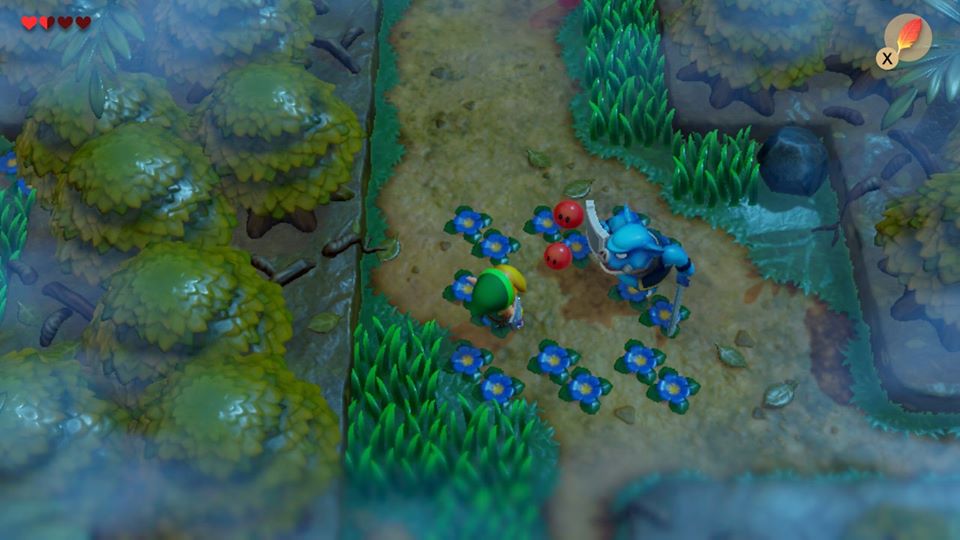 The first change you notice is the graphics. Obviously any game on the Nintendo Switch will have better graphics than a Game Boy game, but the difference is mind-blowing. This is a beautiful game and the art style is charming. It’s a joy to see such familiar locations look so good. There are a quirk with the graphics I’ll get to later, but make no mistake I love the updated graphics.

In fact, these aren’t familiar locations. In almost every corner of Koholint Island, this is a faithful reproduction of every tree, rock and enemy. A common failure of remakes is that they tweak or remove little things that you loved. This game isn’t just taking inspiration from the original, it has stayed true to almost every detail, be it the map, the dungeons or the dialogue I so fondly remembered.

The second thing that I noticed is how much easier the game is to play. I don’t mean the difficulty curve. Compared to the Game Boy, the Switch has a million buttons so you don’t have to press twelve buttons to swap your sword for you bow and arrow. Items like the sword, shield and power gloves now have dedicated buttons which is a major improvement to your quality of life. Boss fights are no longer spent looking at a menu screen and forget about pressing START + SELECT + A + B simultaneously to save the game. I won’t miss that palaver! 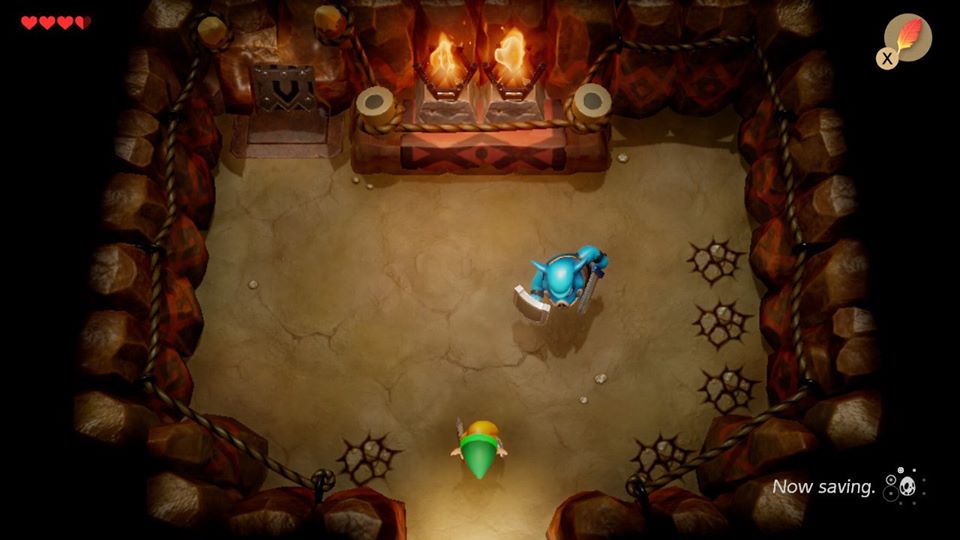 Moving around the island is also so much faster. Because of technological limitations, only a small part of the island could be loaded into memory at once. Screen transitions are gone from the overworld, which means you can zoom around Koholint at a speed you can’t dream of in the original. This is a double edged sword however. It makes Koholint feel so much smaller. Now freed from the original grid system, your new point of view centers on Link, which frequently lets you look into neighbouring regions. This adds to the claustrophobic feeling and dampens the excitement and surprise of visiting a new area.

The combat was another pleasant surprise. Your shield now matters, and you need to use it against other enemies like moblins that carry shields. This makes for a really elegant form of combat that isn’t too challenging for a common enemy. I still however prefer the harder Game Boy version where your strikes had to be very precisely timed whilst staying out of reach of the moblin’s sword. 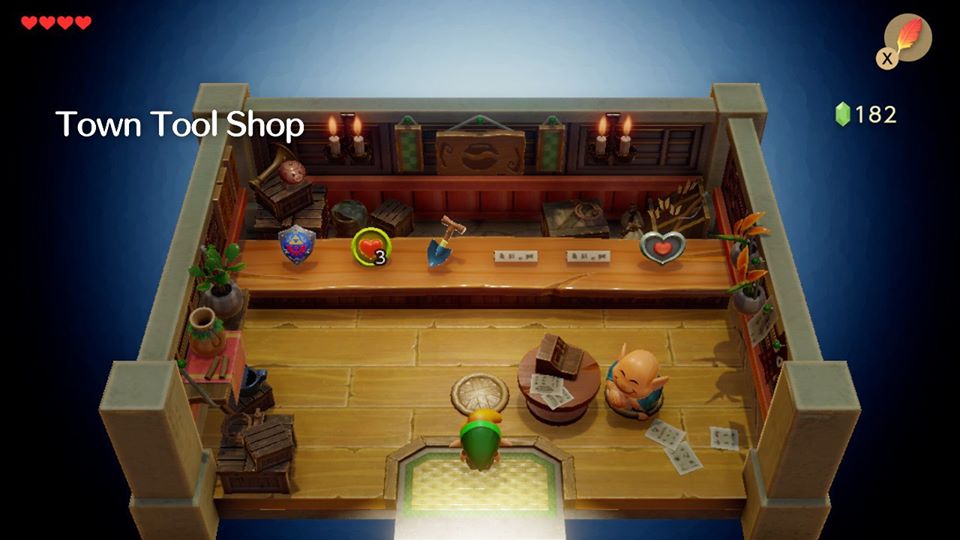 I mentioned graphical quirks earlier, and this is a weird one. The 3D effect is supposed to be enhanced by a special effect that adds depth of field. It’s not perfect however and adds a noticeable blur along the bottom of the screen. Once I was concentrating on the game I stopped paying attention to it after a while, but when you do look directly at it, it looks terrible. Because it is so unavoidable for the player, it’s frustrating that the developer went out of their way to add this to the game. It has also been reported that the game slows down very occasional, but I never had any problems myself. 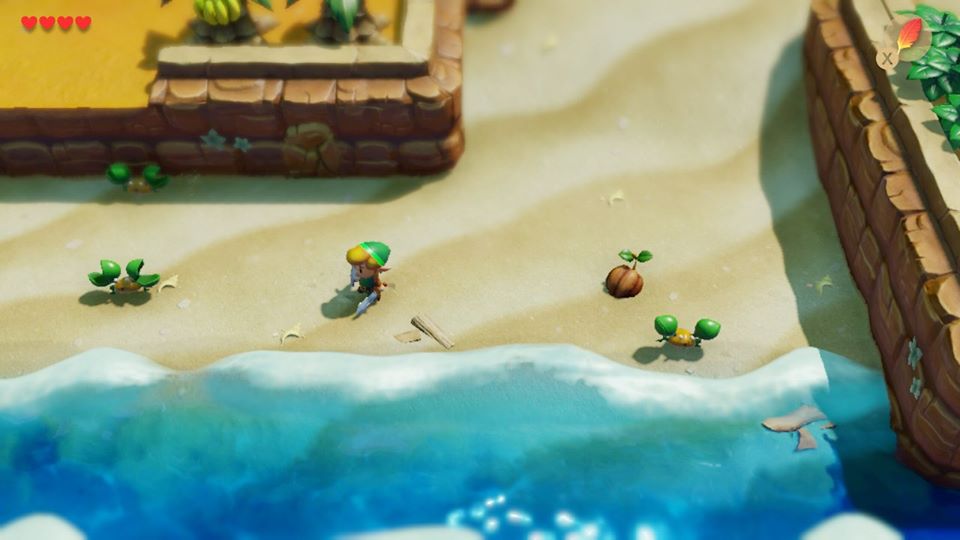 Nintendo’s games have gotten easier over the years, and the difficulty level of the original was something I really enjoyed. I was expecting things to get much easier and is some ways they did.
There are now a lot more pieces of heart, which makes it much easier to take hits, especially early in the game. However if you do want a challenge, there is a brand new hero mode where you take double damage from attacks and you can’t collect hearts to recover your health. This is a great way to give new and experienced players a good experience. Some of the bosses have been changed, but in general they have just been made fairer, not easier.

But the difficulty didn’t just come from combat. Finding your way through the dungeons and solving the puzzles is also a big part of the game. The dungeon maps are now a lot more informative, which I know most people will appreciate. When I was younger, I spent many hours exploring the dungeons, and getting lost. The new maps are a blessing if you don’t have the time for that, but they do make some of the puzzles much easier. My favourite puzzle in the entire Zelda franchise comes from a hidden room in the Turtle Rock that is now just spoiled by the map. I originally found it by visiting every other room in the dungeon. Only then did the map lead me to bombing a completely random wall. I know the new system is better for more people, but the minimalist maps of the original taught me all I know about navigating confusing dungeons. 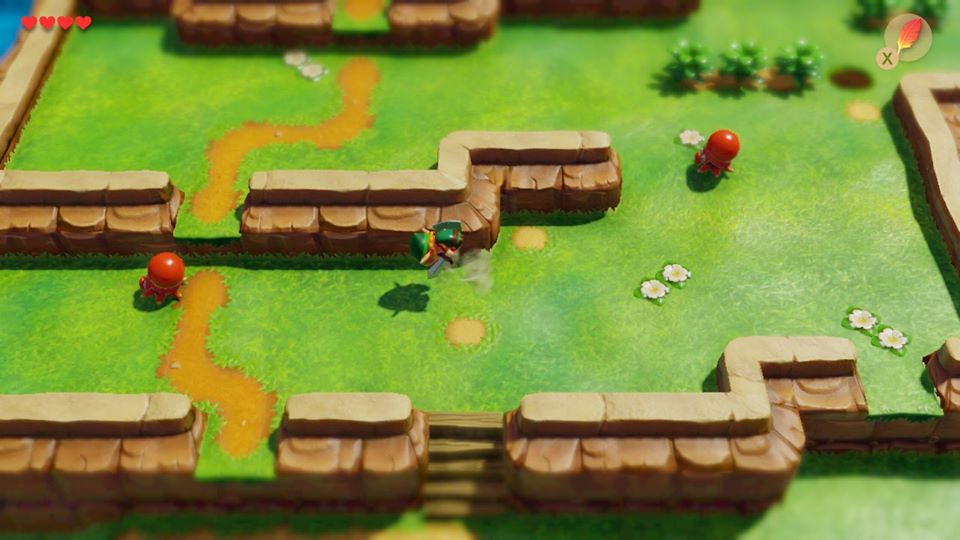 The biggest new feature is the Dungeon Builder, and boy does it disappoint. You can’t create anything new, and there isn’t much incentive for just rearranging existing rooms. The lack of agency or ownership you have over your dungeons is really frustrating. I’m still hoping for a “Zelda Maker” in the style of Super Mario Maker.

The mini-games also were improved. The claw game uses real physics and adds new prizes, the fishing game adds new species of fish and there are new modes for the raft game. These are all very welcome additions.

Overall, this is such a faithful remake, there aren’t many new features. For long time fans like me, the new hero difficulty level is the best new feature. Thankfully it is available from the beginning and you don’t need to do anything to unlock it. However given the price of the game, I would have liked a few more new features. 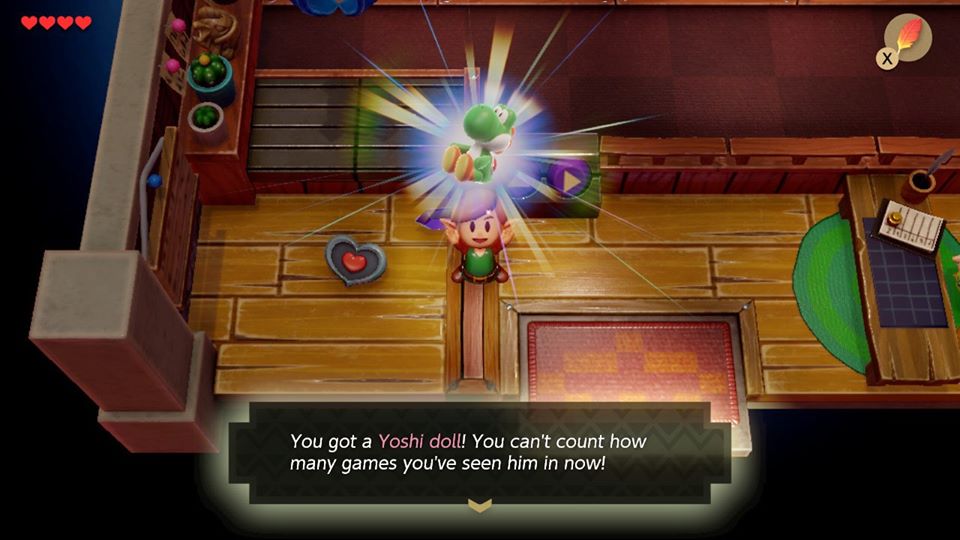 I would give the original game 9/10 and only drop points for the controls which could be really awkward. Did I mention how much I hated trying to press START + SELECT + A +B to save?

How does the new version on the Switch compare? One one hand, this version fixes the problems with the original. The awkward controls are gone and in general I love the new graphics. By learning from the mistakes of the past, this should earn the game a 10/10. Unfortunately that fake depth blurring is a really annoying and unavoidable. The price tag is another problem. The new hero mode helps, but this is a short Zelda game, with few new features. For this reason, I can’t give the new game a 10/10. For these flaws, this remake was clearly made by people who loved the original game. I had so much fun re-exploring Koholint Island, seeing everything again for the first time in the new 3D style, and Hero mode is the perfect addition for a player like me who has played the original over and over again. This means I’m giving the new game a 9/10!