Sharks and dragonflies have a lot in common. They are both beautiful and fast killing machines with impossible senses from the dawn of time. That’s about as cool as can be. But which one is cooler? Sharks or dragonflies? Let’s put them head to head and find out! 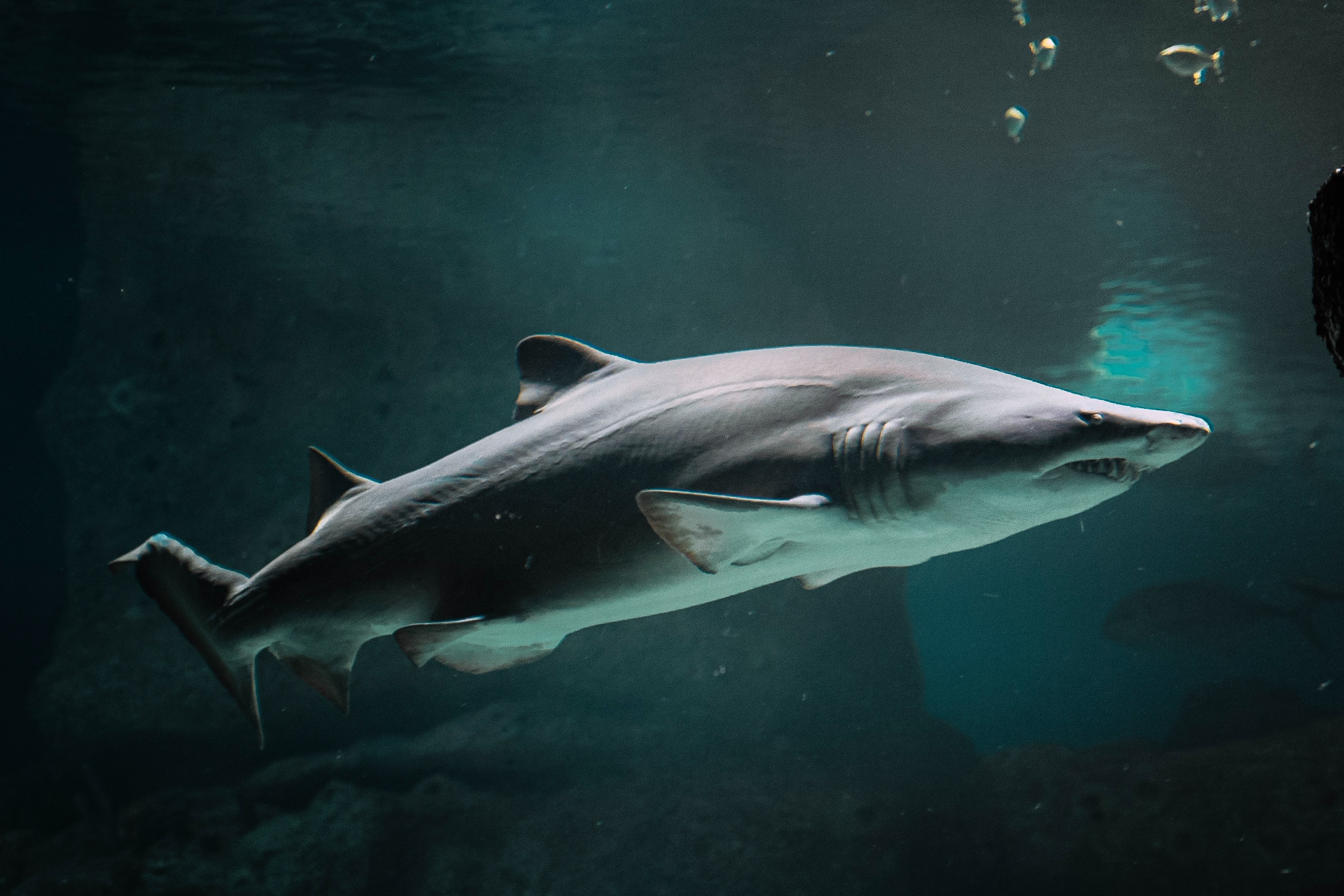 Dragonflies have been around for 300 million years which makes them 70 million years older than dinosaurs. They were among the first winged insects and in the oxygen rich Paleozoic era they were massive with wingspans up to 70cm.

Sharks are even older than dragonflies, having changed very little for 400 million years. 16 million years ago Megalodon sharks were 18m long monsters of the deep. Such scary creatures are now extinct but Goblin sharks are still around having lived unchanged for 120 million years.

Sharks are the clear winners here. Even individual sharks are ancient. Greenland sharks in particular can live up to 400 years old. 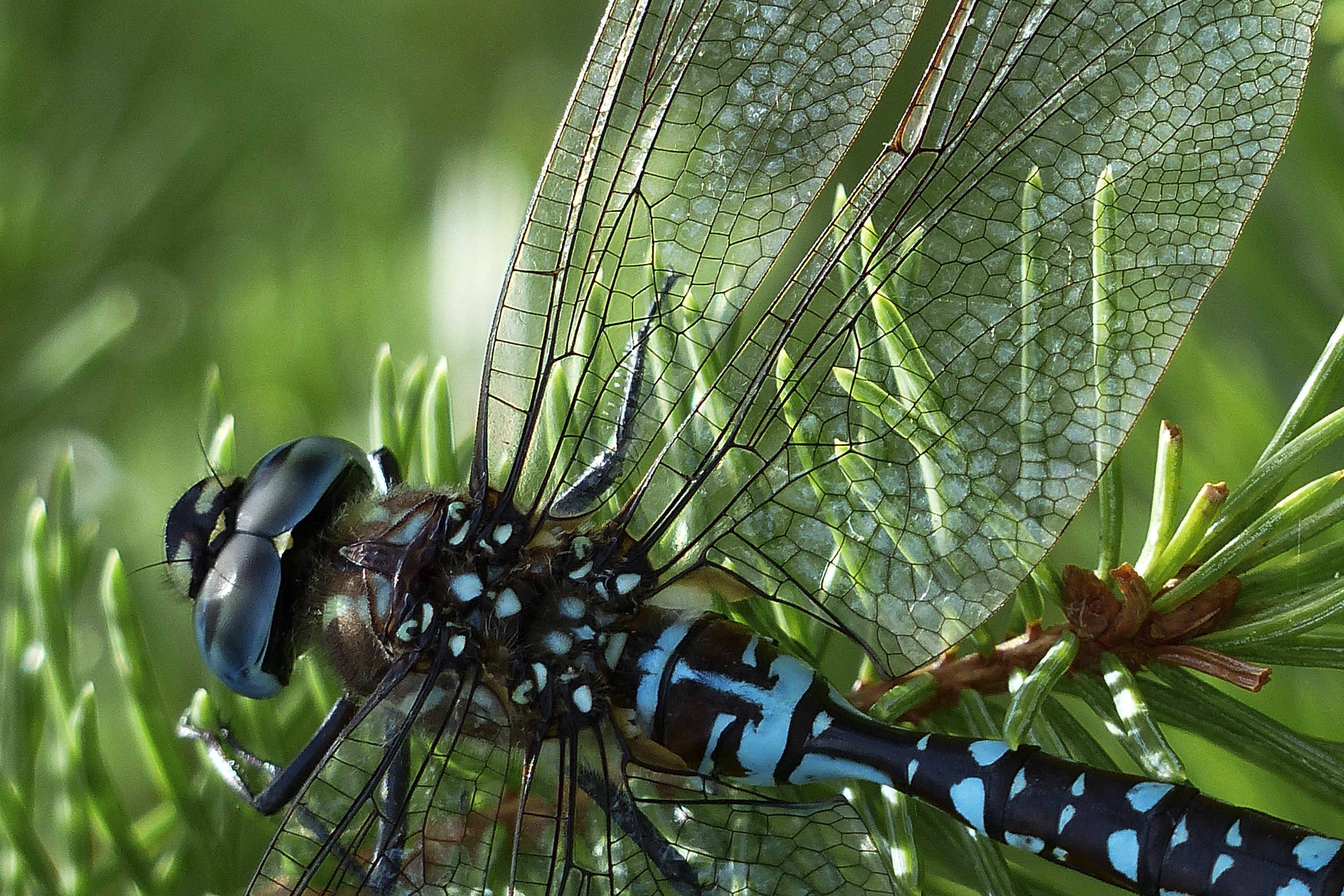 As top predators sharks and dragonflies rely on their incredible senses to find, track and kill their prey. Sharks have an array of incredible abilities. They can hear prey up to 200 meters away, whilst two-thirds of their brain is devoted to smell. One myth about sharks is that they can smell blood from miles away. Their sense of smell is similar to other fish, but they do have the ability to hone in on a scent by sensing which nostril has the stronger signal. Another incredible sense sharks have is the ability to detect electrical impulses over vast distances. They truly are talented creatures.

Dragonflies on the other hand rely on one sense in particular, their sight. They have perfect 360 degree vision. Even sharks have a couple of blind spots in front and behind their head. As well as seeing in colour they can see ultraviolet light and detect the polarisation of light. They can track one target in a swarm with out colliding with any other insects in the swarm.

The brain power required is also light years ahead of other insects. A dragonfly’s eyes have 30,000 facets which their brain processes into a single image. At the same time this airborne predator is calculating flight patterns and velocities to intercept other insects. Normally only creatures with complex nervous systems can do this.

This was almost too close to call. A dragonflies’s vision is truly incredible, but sharks have so many fantastic senses that I had to give them the point. 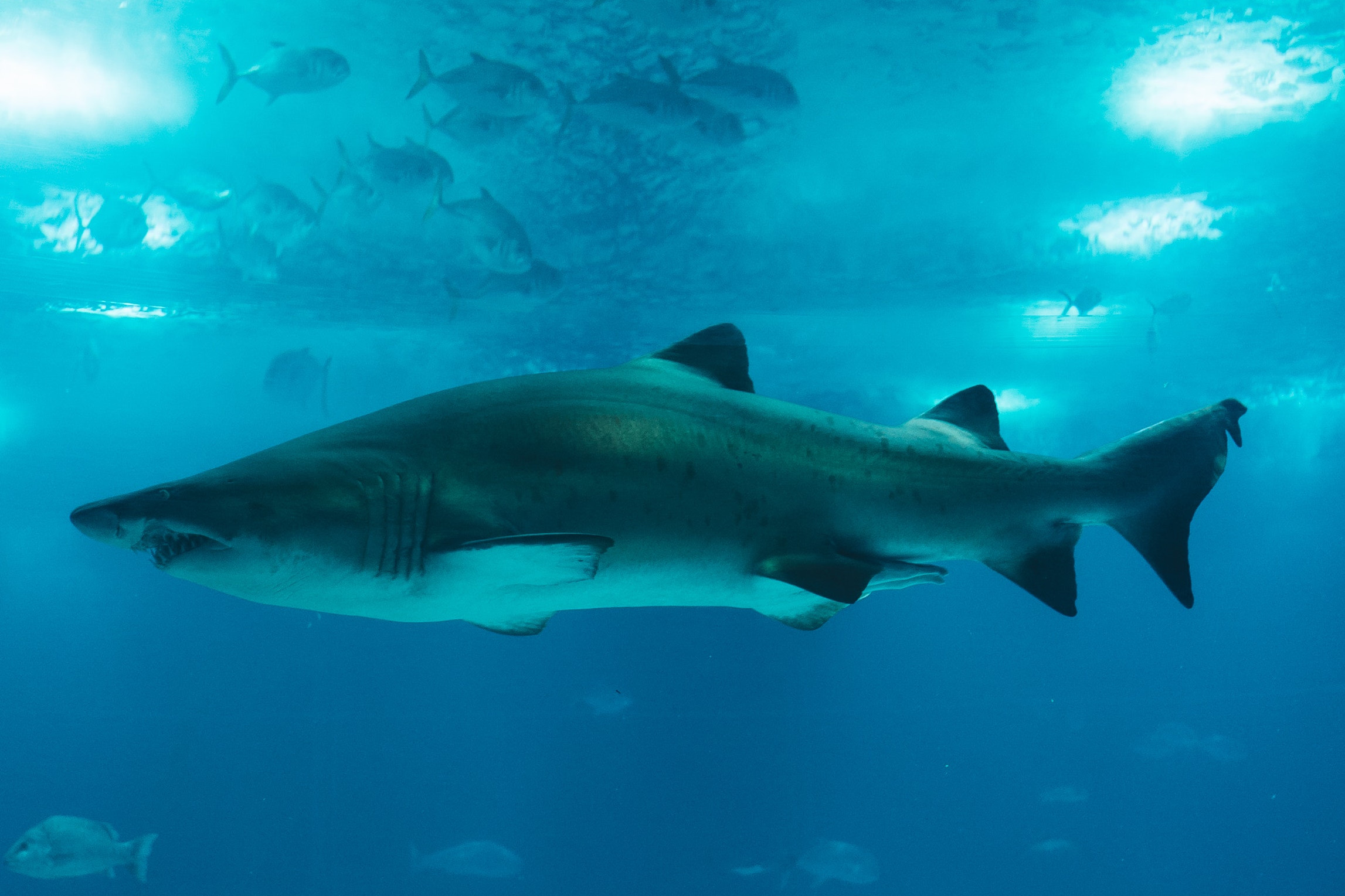 All predators are killers, but sharks and dragonflies are in a league of their own. Sharks can have up to seven rows of teeth. If they lose a tooth it can grow back in as little as three days. Over the course of a life time a single shark can go through 30,000 teeth. Baby sharks will eat each other whilst still inside the mother, who loses her appetite before birth so that she doesn’t eat her offspring. Even before birth, sharks are killing machines.

Dragonflies are also cannibalistic. Spending years as larvae in a pond, they will eat anything they can including tadpoles, insects, small fish and other dragonfly larva. After they transform into dragonflies they become relentless aerial hunters. Able to keep track of their prey at all times, while flying in any direction dragonflies are able to kill 95% of the prey they target. And one meal is never enough. Where as sharks can last months without eating, dragonflies can eat hundreds of mosquitoes in a single day.

Being a killing machine is all about efficiency. Where as dragonflies catch 95% of their prey, for sharks this figure drops to 50%. This is still very high when compared to other predators like big cats, but the difference is so big I had to give this point to the winged assassins.

Sharks are famous for being on the move. They have to keep moving to supply their gills with water or they will suffocate. They are also incredibly fast. Salmon Shark can reach speeds of 55 miles per hour. Dragonflies have a very different set of skills. Each of their wings has a dedicated muscle group controlled independently. This enables heroic feats of manoeuvrability such as flying backwards, sideways, upside down and even hovering like a helicopter.

Hunting is not the only reason these wonderful creatures like to move. They also migrate huge distances. Some dragonflies species have the longest migrations of any insects with the globe skimmer travelling 11,000 miles. This however is outclassed by Great White sharks. One was recorded travelling 12,400 miles between South Africa and Australia. Given how amazing this is, it’s a shame that shark migrations are still a big mystery.

Dragonflies are impressive acrobats, but the speeds and distances achieved by sharks are incredible. Sharks being bigger are naturally capable of higher speeds and longer migrations. I decided this was too close to call and gave both sides a point each. 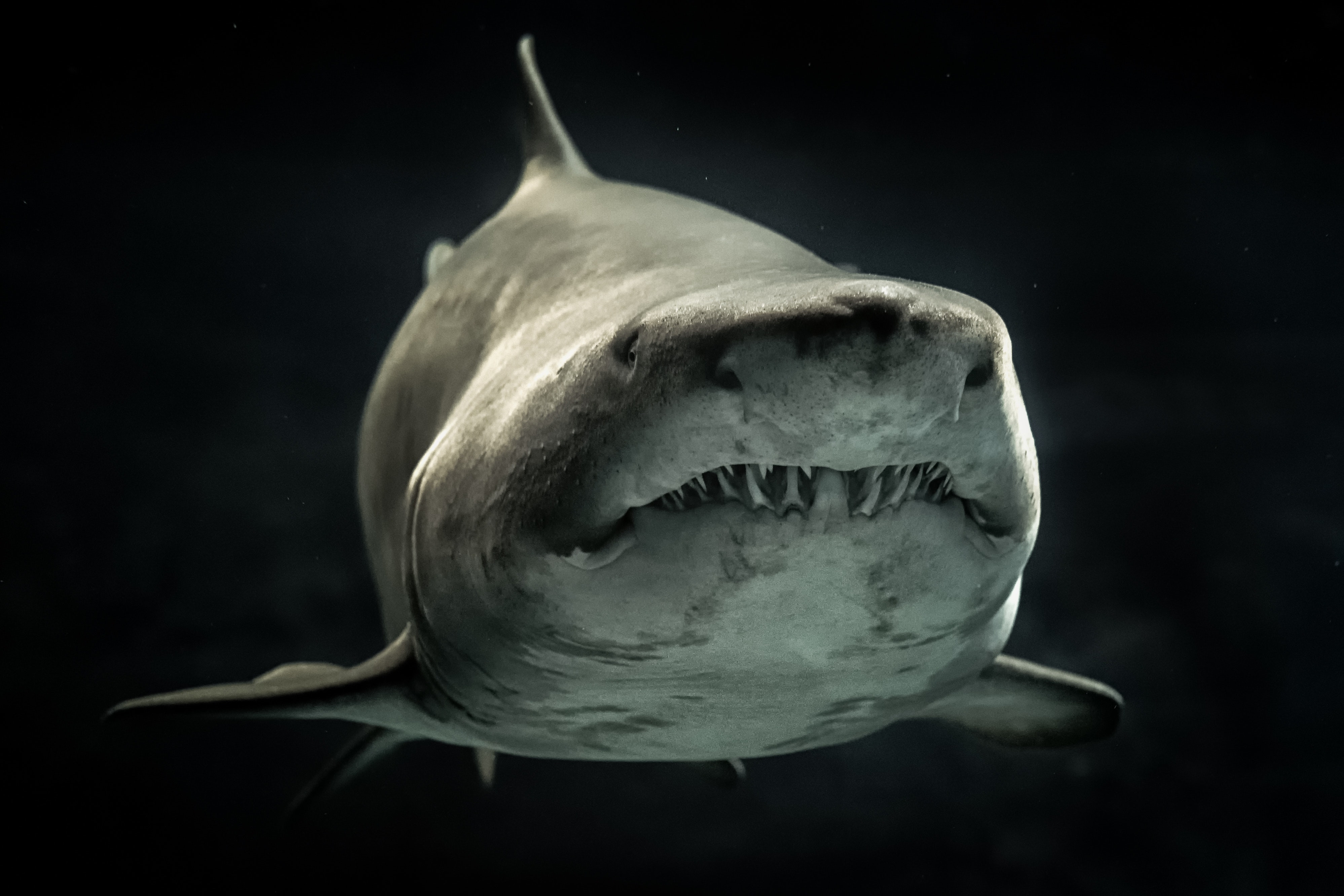 Dragonflies are stunningly beautiful, rivalling butterflies for colour and spectacle. Sharks are elegant and sleek, but by most definitions of beauty, butterflies are the clear winners.

This was the easiest category to decide. Dragonflies pick up another point.

We have a draw! But we need a winner. Sharks and dragonflies won two categories each. Sharks had the advantage when it came to super-powered senses and being ancient. These victories were fairly close, with dragonflies able to almost match Sharks. On the other hand, when dragonflies won two categories, they did so with some comfort. They didn’t win every category but they impressed in every single area under consideration. Therefore, there can be only be one winner.

The Winner Is Dragonflies 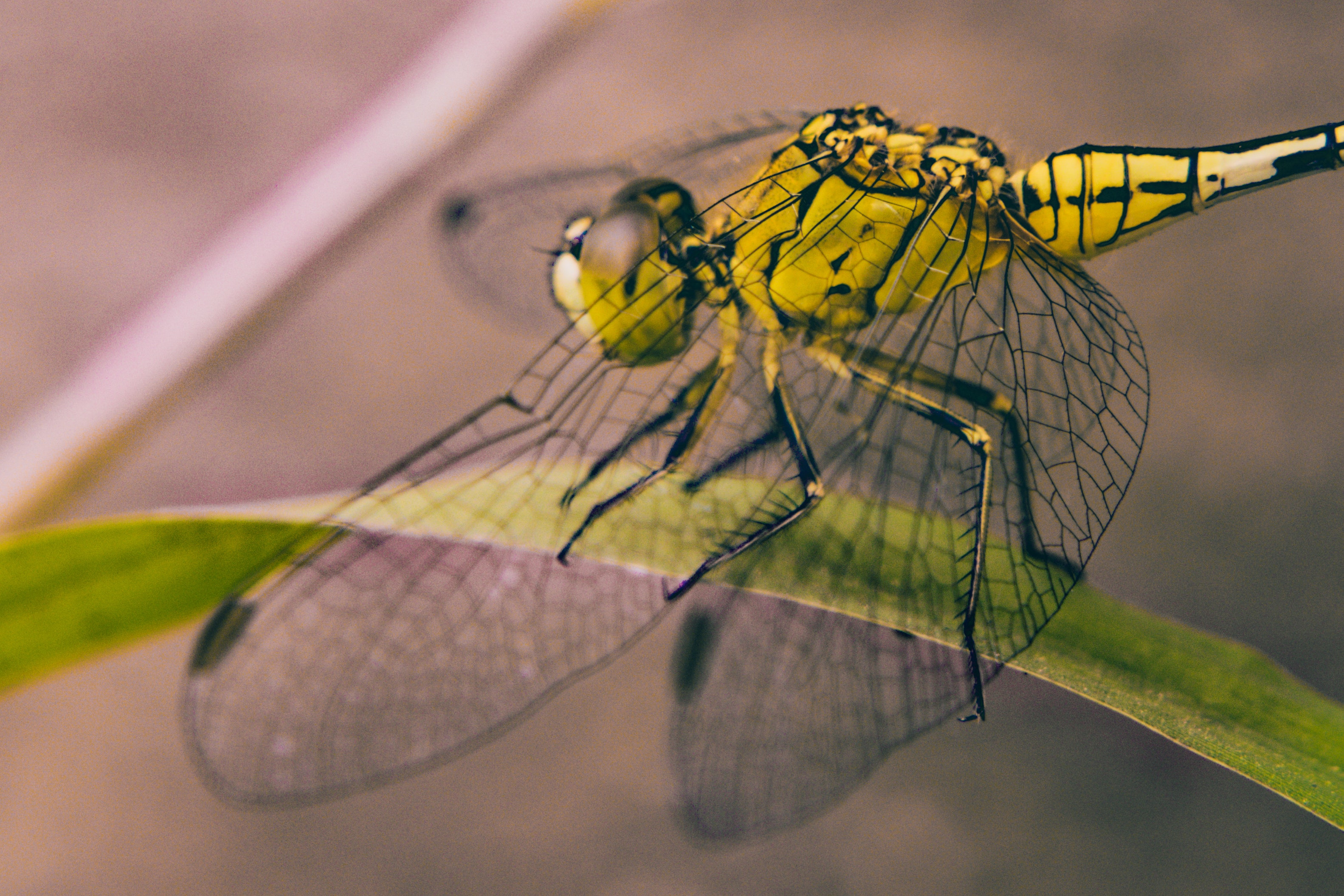 We have a surprise winner! Dragonflies may have been the underdogs coming into this contest but they are officially the champions, congratulations my winged friends.